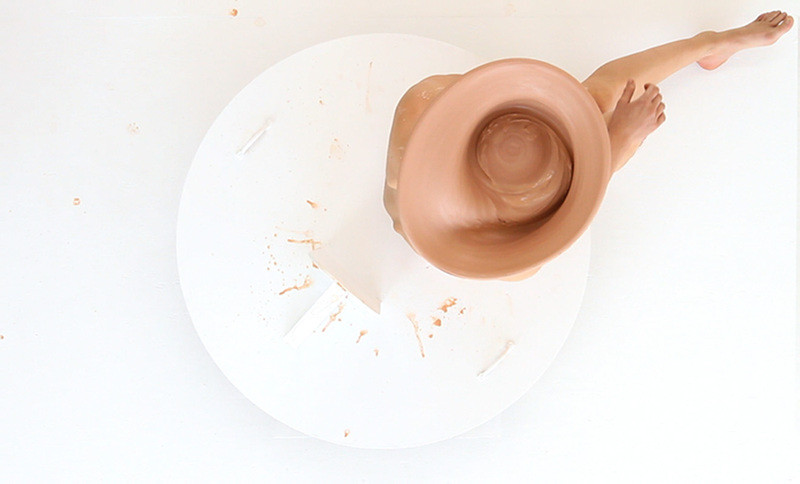 Susanne Vielmetter Los Angeles Projects is pleased to present an installation of work by Melodie Mousset in the 4th gallery.
Mousset's work extends through numerous mediums, including performance, video, installation, photography, and sculpture. She engages an interest in the body as a vehicle of physical, ritual, and historiographical interaction.

Entitled “Impulsive Control”, this exhibition centers around a mesmerizing act of endurance that the artist privately performed in her studio in collaboration with the ceramist Christopher Miller. Mousset positioned herself on a potter’s wheel while the ceramist shaped a series of the vessels over her face, mask-like clay skins that covered her entire head above her mouth. Miller threw on the lowest speed he was able to work with and used the softest clay possible so that Mousset was able to endure the pressure being applied down onto her body. The result of the project extended to 10 ceramic vessels - sculptural snapshots of moments of osculating movement, as well as several videos filmed from above and recording the progression of the vessels as they seemingly grow out of the artist’s head. The videos capture the initial impetuous of the project – the idea of the artist’s head as a malleable mass - and present the illusion of this mass to be opened, molded, transformed and extended. The physically extreme nature of the experience, observing the body of the artist seemingly being transformed by the hands of the potter, counters the tensions between idea and matter addressed here. The work forcefully acknowledges the presence of power dynamics, including those of gender, both in respect to the artist / model as well as to the artist / viewer relationship. In her work, Mousset has opened a space where the body is given equal power to transform itself, to be as fluid and dynamic as the mind.*
*Based on a text by Amy Howden Chapman 2010

Melodie Mousset was born in 1981 and lives and works in Los Angeles, California. She has studied at the National d'Arts Plastique, EBAR, in Rennes, France, the Superieur d'Arts Visuel, ECAL, in Lausanne, Switzerland, the Royal College of Arts, London, and most recently completed her Masters of Fine Arts at the California Institute of the Arts in Valencia, CA. Her work was recently included in “George Herms: Xenophilia” at the Museum of Contemporary Art, Los Angeles and she has been included in exhibitions at Clifton Benevento, New York, and at Wall Space, New York, among others. Mousset's work will be presented in an upcoming solo exhibition at The Suzanne Geiss Company, New York, in February 2013.
www.vielmetter.com