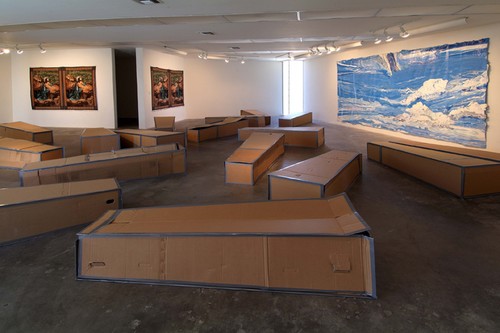 Susanne Vielmetter Los Angeles Projects is pleased to present a new solo exhibition by Rodney McMillian. Entitled “Odes”, the exhibition centers around a large painting of the sky. The painting will be sold by the square foot. Each square foot will be priced based on the income level of the prospective owner and will be cut and shipped at the end of the exhibition. “Double Jesus” and “Double Double Jesus” are two blankets depicting the same image of Jesus hung side by side on the gallery wall. 18 post-minimalist objects, boxes made from cardboard and duck tape, will complement the installation in the main space. In the project space, McMillian will present photographs of a plaster bust of an anonymous male figure. During the opening, the artist will deliver Lyndon B. Johnson’s “Greater Society” speech for the full two hours of the reception. A video of this speech performed by the artist Stephen Westfall will be shown in the project space.

McMillian’s complex artistic practice embodies a wide range of media and techniques. An overarching concern in the work is painting, its relationship to language and content, and its role as artwork within the gallery context. His use of canvas as a material element in his sculptures, videos, and paintings, his fascination with still life and portrait painting, and his incorporation of discarded objects all point to a highly poetic critique and investigation of social history and culture.

Rodney McMillian received his MFA in 2002 from the California Institute of the Arts and his BFA at the School of the Art Institute of Chicago, Chicago, Illinois. He attended the Skowhegan School of Painting and Sculpture, Skowhegan, Maine, in 2000. McMillian's work has been included in “Ordinary Culture: Heikes/Helms/McMillian” at the Walker Art Center, Minneapolis; in “Painting in Tongues”, Museum of Contemporary Art Los Angeles; in "Uncertain States of America" at the Astrup Fearnley Museum of Art, Oslo, Norway, and traveling to Serpentine Gallery, London, UK, Bard Museum Center for Curatorial Studies, Annandale-on-Hudson; in "Menschensgladbach - Neue Ankäufe und Leihgaben", Städtisches Museum Abteiberg, Mönchengladbach, Germany; in "Thing - New Sculpture from Los Angeles", UCLA Hammer Museum, Los Angeles; in "Frequency", Studio Museum in Harlem, Harlem; in "White Noise", REDCAT Gallery, Los Angeles; in "FADE - African American Artists in Los Angeles - A Survey Exhibition", Luckman Gallery, Cal State Los Angeles,; and in "Gibt's mich wirklich - Vier Raeume aus der Sammlung Schuermann", K21, Duesseldorf, Germany (catalog). His work has been shown in a solo exhibition at Triple Candie, New York and he will be included in the upcoming “USA Today” exhibition at the Royal Academy of Art, London. For 2007, he has been invited for a solo exhibition at the Neuer Aachener Kunstverein, Aachen, Germany. This is Rodney McMillian’s second solo exhibition at the gallery.
www.vielmetter.com