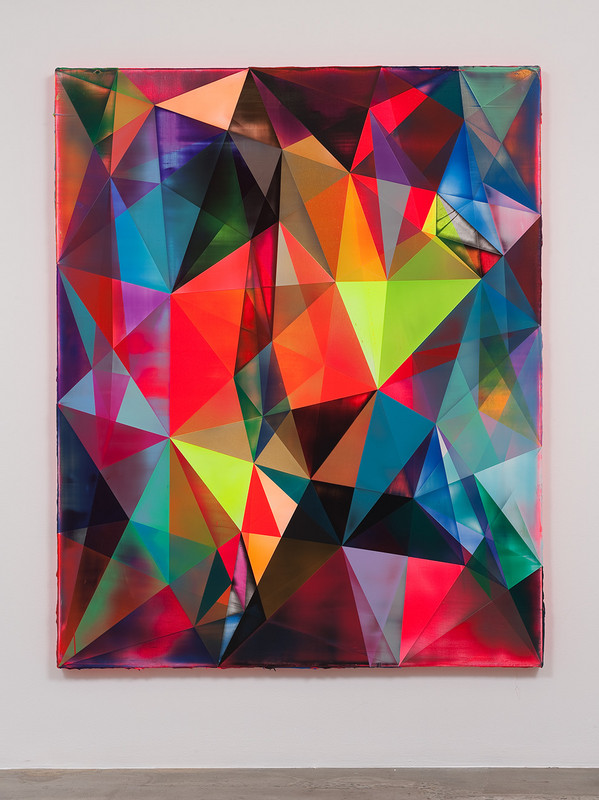 Susanne Vielmetter Los Angeles Projects is pleased to announce our first solo exhibition with Berlin-based painter, Shannon Finley. Finley will present a series of six large acrylic paintings on canvas alongside a suite of several small-scale paintings in galleries 3 and 4. In addition, the artist has created floor-to-ceiling, hand-silkscreened wallpaper that extends his abstractions from the canvas to the environment.

Finley’s meticulously layered psychedelic abstractions are formalism at its finest. In his paintings, Finley explores three focused forms, the orb, the rhombus, and the wave. Each composition is built of interlocking, co-centric, and overlapping permutations of a single geometry. The optic result borders on haptic effect, calling to mind the work of Bridget Riley and Sol Lewitt in the case of the wave paintings; Gerhard Richter and Sarah Morris in the rhombus paintings.

Despite these historical precedents, Finley’s work is rooted in 21st century technology. The artist initially produces his complex arrangements as digital graphics. However, this underlying composition of shapes becomes more sophisticated, and in some cases unrecognizable, as Finley develops the paintings in the studio. The intersection between the digital rendering and the analog input of the artist’s hand produces a captivating aesthetic that does not settle easily into either category of image making. To create the precise vectors of these forms, Finley has developed several series of linked gestures specific to each of his geometric explorations. While the viewer is not privy to this pas de trois between artist, tools, and materials, the incredibly smooth edges and surfaces of Finley’s shapes hints at a private performance.

In these new paintings, Finley pays particular attention to color by applying a mixture of acrylic gel and pigment which is spread using a palette knife to create up to 30 layers of medium. . The resulting hues reflect a precise understanding of color-mixing; the palette is luminous and compellingly bold. All of this careful work combines to produce a visible language for invisible experiences such as spirituality, particle physics, and the astronomical sublime.

Shannon Finley received his BFA from Nova Scotia College of Art and Design, Halifax. His work has been exhibited in New York, Los Angeles, Berlin, Düsseldorf, Boston and San Francisco. He recently had a solo exhibition in Munich at Walter Storms Galerie and he has one upcoming at Jessica Silverman Gallery in San Francisco, CA in 2015. His work will also be included in a group show at Upstream Gallery in Amsterdam, the Netherlands in September 2014.
www.vielmetter.com