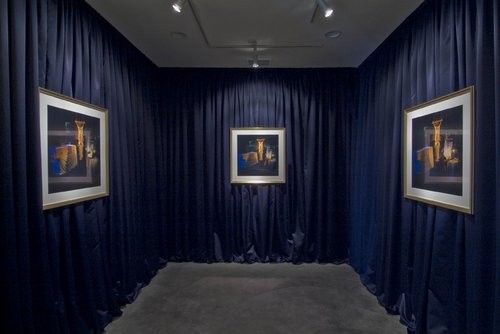 Susanne Vielmetter Los Angeles Projects is pleased to present work by Suzanne Lacy in the project space. On view will be an installation from a 48 hour performance, created in 1980 for a performance series at LACE Gallery. Entitled “In the last Throes of Artistic Vision”, the work explores the bathos of artistic suffering intertwined with ruminations on violence and ambition. In the performance, each night a Rembrandt Dracula painted “The Slaughtered Ox” by number and each day she slept in a coffin filled with earth in an abandoned top floor warehouse. Led by wraiths carrying candles, the audience walked up five flights of stairs to encounter a dramatically lit tableau and accompanying soundtrack. Two themes run through The Last Throes of Artistic Vision, a meditation on violence and its origins, on the one hand, and a somewhat comedic comment on Linda Nochlin’s famous query in her article from that era: Why are there no great women artists? Rembrandt, the “prince of darkness” is conflated with that other prince, Dracula, and the prescriptive painting is duly executed in a performative installation that was open throughout to the public. At Vielmetter, Lacy unveils a series of four photographic tableaux in a sound-accompanied installation, along with paraphernalia from the original performance. The photos by Raul Vega capture the evocative staging and lighting of the original performance. This is the first gallery showing of this seminal work and it represents a lesser-known companion project to the humorous Learn Where the Meat Comes From, recently featured in the Getty Museum’s California Video exhibition (2008).
In the 1970s Lacy was one of a prolific group of emerging performance artists in Los Angeles, including Barbara T. Smith, Nancy Buchanan, Paul McCarthy and Chris Burden. Her work is personal, idiosyncratic, research-based and body-sited - it covers a wide range of territory and includes public performances, political activism, videos, and photography. In more publicly sited works, Lacy has engaged in social and civic forms of protest and media intervention, such as the widely publicized In Mourning and In Rage (with Leslie Labowitz, 1977). Artistic process and identity—characteristic of an era of artistic experimentation and the increased recognition of women’s place in the art profession—are themes Lacy visits frequently.
Suzanne Lacy received a MFA at the California Institute of the Arts in 1973. Her work has been widely exhibited and has been included in many important museum exhibitions, including the recent “Your Donations Do Our Work”, with Andrea Bowers at the UCR Sweeney Gallery, Riverside; “California Video” at the J. Paul Getty Museum, Los Angeles; in “Re-Act Feminism: Performance in the 1970s and Today”, Akademie der Kunst, Berlin; “Making It Together: Women’s Collaborative Art and Community”, The Bronx Art Museum, Bronx, NY; “The Way That We Rhyme: Women, Art and Politics”, Yerba Buena Center for the Arts, San Francisco; “Kiss Kiss, Bang Bang”, Museo del Bilbao, Bilbao, Spain; “WACK! Art and the Feminist Revolution”, Museum of Contemporary Art, Los Angeles, “Primera generacion”, Museo Nacional Centro de Art, Reina Sofia, Spain; “Los Angeles: 1955-1985”, Pompidou Centre, Paris, France; “Feminist Future symposium”, The Video Databank at MOMA, New York; “Out of Action: Between Performance and the Object 1949-1979”, Museum of Contemporary Art, Los Angeles; “Made in California: Art, Image, and Identity, 1900-2000”, Los Angeles County Museum of Art, Los Angeles; “Mothers of Invention”, MUMOK, Vienna, Austria; “The Time of Our Lives”, New Museum of Contemporary Art, New York; “Sexual Politics: Judy Chicago’s ‘Dinner Party’ in Feminist Art History”, Hammer Museum, Los Angeles; “Outside the Frame: Performance and the Object”, Cleveland Center for Contemporary Art, Cleveland; “The Subject of Rape”, Whitney Museum of American Art, New York; “Art and Ideology”, New Museum of Contemporary Art, New York; “Global Space Invasion”, San Francisco Museum of Modern Art, San Francisco; Performance!”, The Woman’s Building, Los Angeles.
Susanne Vielmetter Los Angeles Projects is located at 5795 West Washington Blvd in Culver City, between Fairfax and La Cienega. Gallery Hours are Tuesday through Saturday from 11 am - 6 pm and by appointment. Directions: Coming from downtown, take the 10 frwy west, exit at the Washington / Fairfax exit, turn left, it's the second building on your right. 10 frwy coming from the west side, take the Fairfax exit, turn right on Fairfax, turn immediately right on Washington Blvd, the building is the second on your right, next to the Dunn Edwards store.
www.vielmetter.com