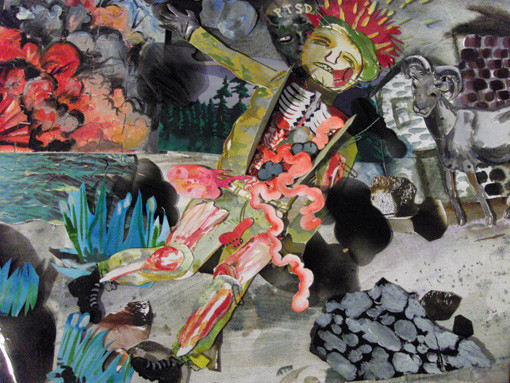 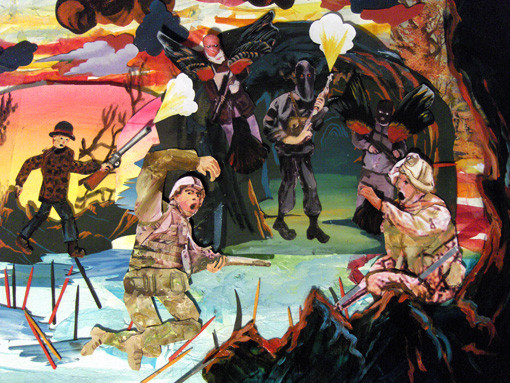 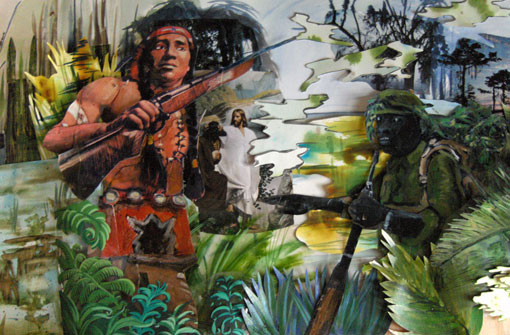 Martha Colburn
Triumph of the Wild (animation sheet), 2008
Video, 8 Minutes
Edition of 8 (+ 2AP)
Courtesy Galerie Bob van Orsouw, Zurich
Within the scope of Suzie Q Projects, Birgid Uccia and Bob van Orsouw are happy to present, for the first time in Switzerland, a solo exhibition by the American artist Martha Colburn. Colburn was born 1971 in Pennsylvania and lives and works in New York and Amsterdam.

Colburn’s work has become widely known through a solo exhibition at the Frankfurter Kunstverein and her participation at the Whitney Biennial in New York, as well as at many prestigious international film festivals. Within the framework of Art Statements at this year’s Art Basel, Colburn’s 7-minute animated film “Myth Labs” (2008) was shown. In this work, filmed with a super-8 camera, Colburn does not incorporate found material as in earlier productions, but paints the scenes herself, frame by frame, so that a filmic kaleidoscope of post-industrial American society emerges. It is not gods and heroes that stand at the center of these U.S. myths, but terrorists, soldiers, Indians, androids, hybrid creatures, skeletons and animal cadavers.

In Colburn’s short films violent excesses, drug abuse, sexual perversions and consumerism are linked to themes of Biblical and political origin. In the same way, poverty and religious extremism represent fixed points of grotesque to carnivalesque activities. Whether the characters are a dancing, crack-smoking Martin Luther, an Osama bin Laden in interaction with figures from “The Wizard of Oz” or American military authorities that offer their recruits cosmetic operations gratis – the dynamism in all of them is inherent in scenarios that range from spectacular to tumultuous and occasionally remind us of the dramaturgy of action films.

Colburn, who in the 1990s worked as a musician and put out six records, provides a frenetic soundtrack for her films. Music, for the artist, represents an initial source of inspiration: “Songs gave me thematic and structural material to spin my ideas around.” In analogy to music, Colburn strives to give her films an underlying time structure in the form of rhythms and dissonances. She thereby succeeds in generating a “visual melody” in which film, music and painting come together in a unique symbiosis.

Alongside of the collages in our exhibition, Colburn’s newest short film “Triumph of the Wild” will be shown. The hunting impulse as a primary force, the impotence of man in the face of nature, the senseless dominance of weapons, and destructive violence – all with an imagined ideal state of affairs in mind – represent major motifs. This film confirms once again what the artist Jonas Mekas noted during a shared exhibition: “Bordering on the outrageous, crackling with frame energy, Martha Colburn films are naked testimonials of our times, and of her generation.”