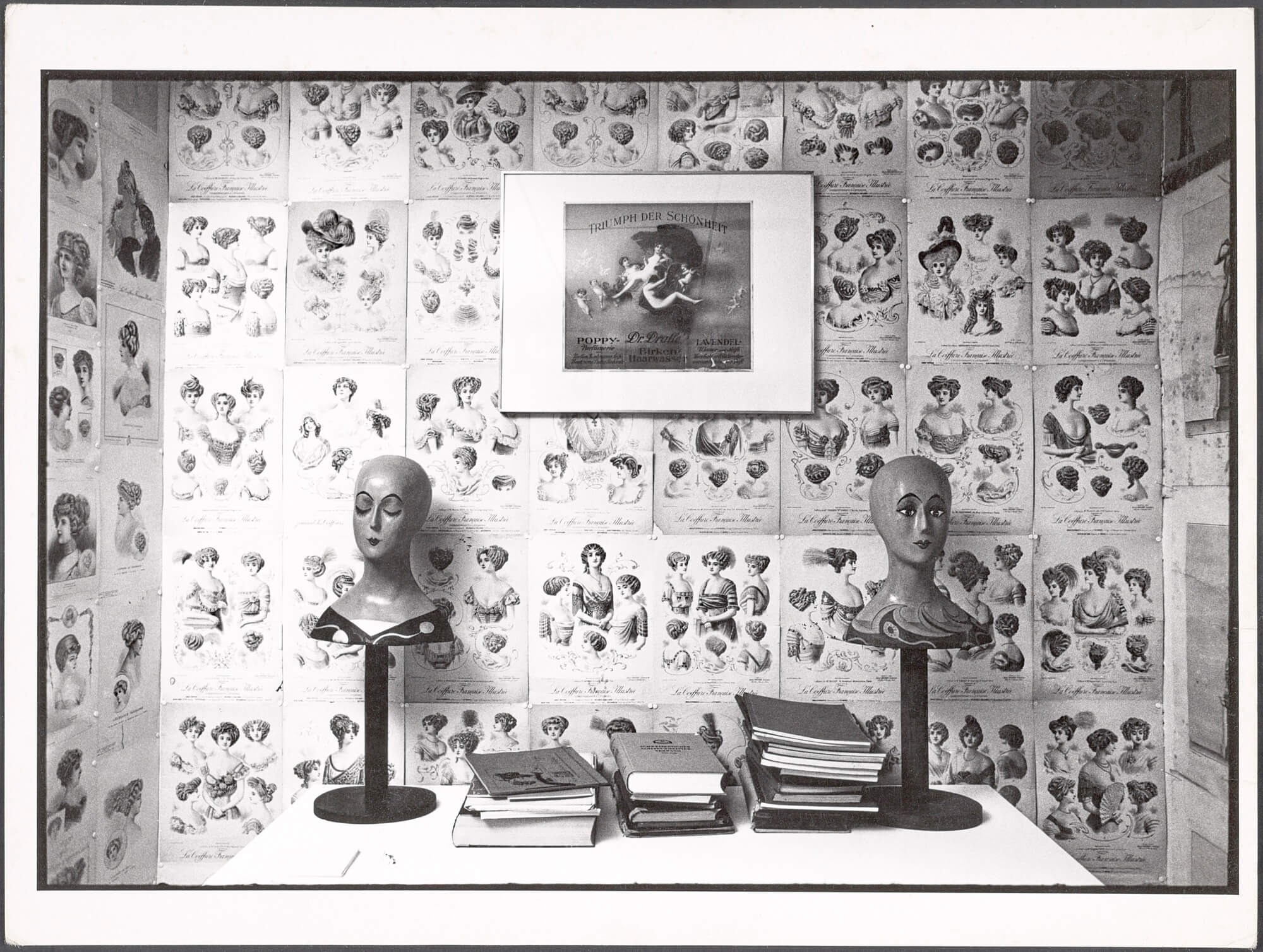 Swiss Institute is pleased to present Grandfather: A Pioneer Like Us, a restaging of the 1974 exhibition by acclaimed curator Harald Szeemann (1933-2005), who is known for his innovative and radical approach to working with artists. This exhibition recreates Szeemann’s apartment in Bern, Switzerland, where he organized the original show, an all-consuming investigation of the life and work of his grandfather Étienne Szeemann, a famed hairstylist and inventor. Grandfather: A Pioneer Like Us, includes approximately 1,200 objects from the Getty Research Institute’s Harald Szeemann Archive and Library and private collections.

Harald Szeemann began his work as an exhibition curator in 1957, and in 1961, at age 28, was appointed director of the Kunsthalle Bern, becoming one of the youngest museum directors in the world. He transformed the institution into an international showcase, focusing at once on current developments in contemporary art, such as kinetic art, op art, and Happenings, as well as visionary folk artists and popular culture. Szeemann cultivated close collaborations with artists and began traveling the globe in search of new developments in art; in this early phase he developed the exhibition and research methods that would ground all his future endeavors. He organized two major international exhibitions which would cement his reputation as a visionary: Live in Your Head: When Attitudes Become Form (1969), followed by the fifth edition of Documenta, Questioning Reality: Pictorial Worlds Today (1972). With these exhibitions, he moved towards a more experimental approach to curating that, by some accounts, centered the curator as auteur. Szeemann often found himself at odds with artists, trustees, and museum professionals and the intense response to Attitudes led Szeemann to resign from Kunsthalle Bern.

Following this period of controversy and the conclusion of documenta 5 in 1972, Szeemann found himself with no commission and no immediate prospects. Undaunted, he began to curate an exhibition in his apartment. Grandfather: A Pioneer Like Us examined the fascinating life of Szeemann’s grandfather, Etienne Szeemann, an inventive hairdresser and wigmaker who had developed his own permanent wave machine. Part artist’s museum and part surrealist experiment, the exhibition used the possessions of Szeemann’s grandfather to produce a series of dynamic and surprising juxtapositions that simultaneously explored the contours of his grandfather’s biography, the migrations of people across Europe over the course of wars in the twentieth century, the development of hairdressing as a parallel modernism with its own visionaries and avant-gardes, and the essence of curating itself as a creative and meaningful activity.

The exhibition marks a significant moment in Szeemann’s development, as it set in motion a series of projects that challenged what constitutes both exhibitions and institutions, whilst redefining the practice of curating. This full-scale reconstruction is a culmination of three years of research and conservation by the Getty Research Institute, Los Angeles. Szeemann maintained most of the hundreds of elements from the original exhibition, including furniture, and this presentation carefully reproduces it, complete with family photographs, his grandfather’s art collection, household objects, and the fascinating tools of the hairdressing trade.

Swiss Institute’s 2nd floor Education & Public Programs Room doubles as a study room focused on Harald Szeemann’s curatorial practice prior to Grandfather: A Pioneer Like Us. Exploring his tenure at Kunsthalle Bern, as well as the exhibitions Live In Your Head: When Attitudes Become Form (1969) and documenta 5 (1972), the study room will feature an array of archival materials, videos and slideshows. An expansive selection of posters that Szeemann commissioned to accompany his exhibitions at Kunsthalle Bern line the gallery walls.
The Education & Public Programs Room features three seminal conceptual artworks, each of which are being shown in a New York institution for the first time. The works by Robert Barry and Allen Ruppersberg were included in When Attitudes Become Form at Kunsthalle Bern. As part of Uranyl Nitrate (UO2(NO3)2) (1969), Robert Barry has released a capsule containing the titular radioactive compound on SI’s Roof Terrace. Allen Ruppersberg’s Travel Piece (1969) features four newspapers Ruppersberg collected on a journey from the Midwest to California. Additionally, Infinito (1971) by Giovanni Anselmo, originally included in documenta 5, is composed of a projection of the word infinito with the projector’s focus set “to infinity,” rendering the word indecipherable. Mining the elemental, the quotidian and the atmospheric, the trio of works collectively highlights Szeemann’s visionary engagement with art’s spatial and temporal boundaries.
Grandfather: A Pioneer Like Us was originally part of the traveling retrospective Harald Szeemann: Museum of Obsessions, which was organized by Glenn Phillips and Philip Kaiser, with Doris Chon and Pietro Rigolo. Grandfather: A Pioneer Like Us is organized in partnership with the Getty Research Institute. It was was previously exhibited at the ICA LA, Kunsthalle Bern, Kunsthalle Düsseldorf, and Castello di Rivoli.