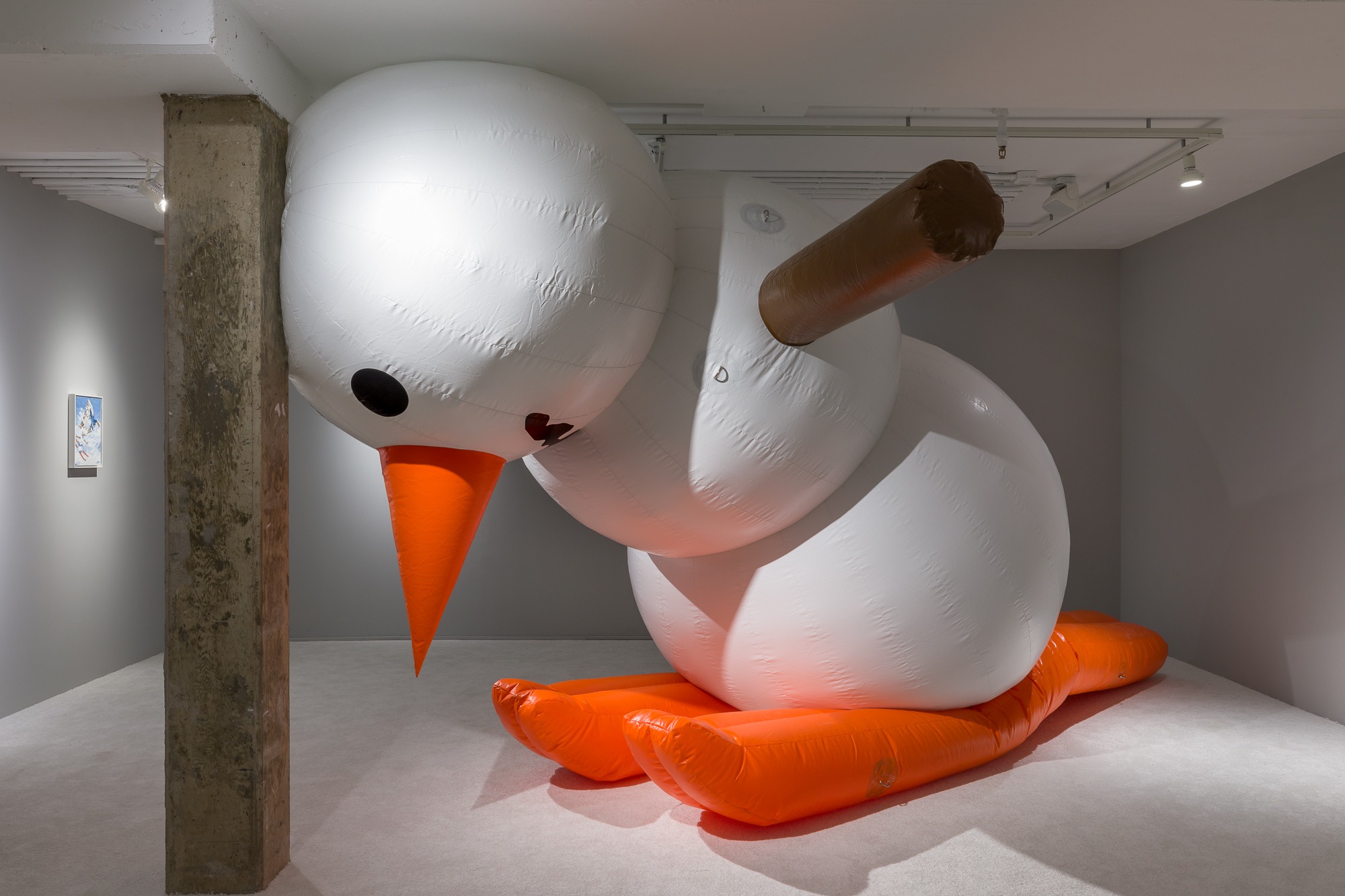 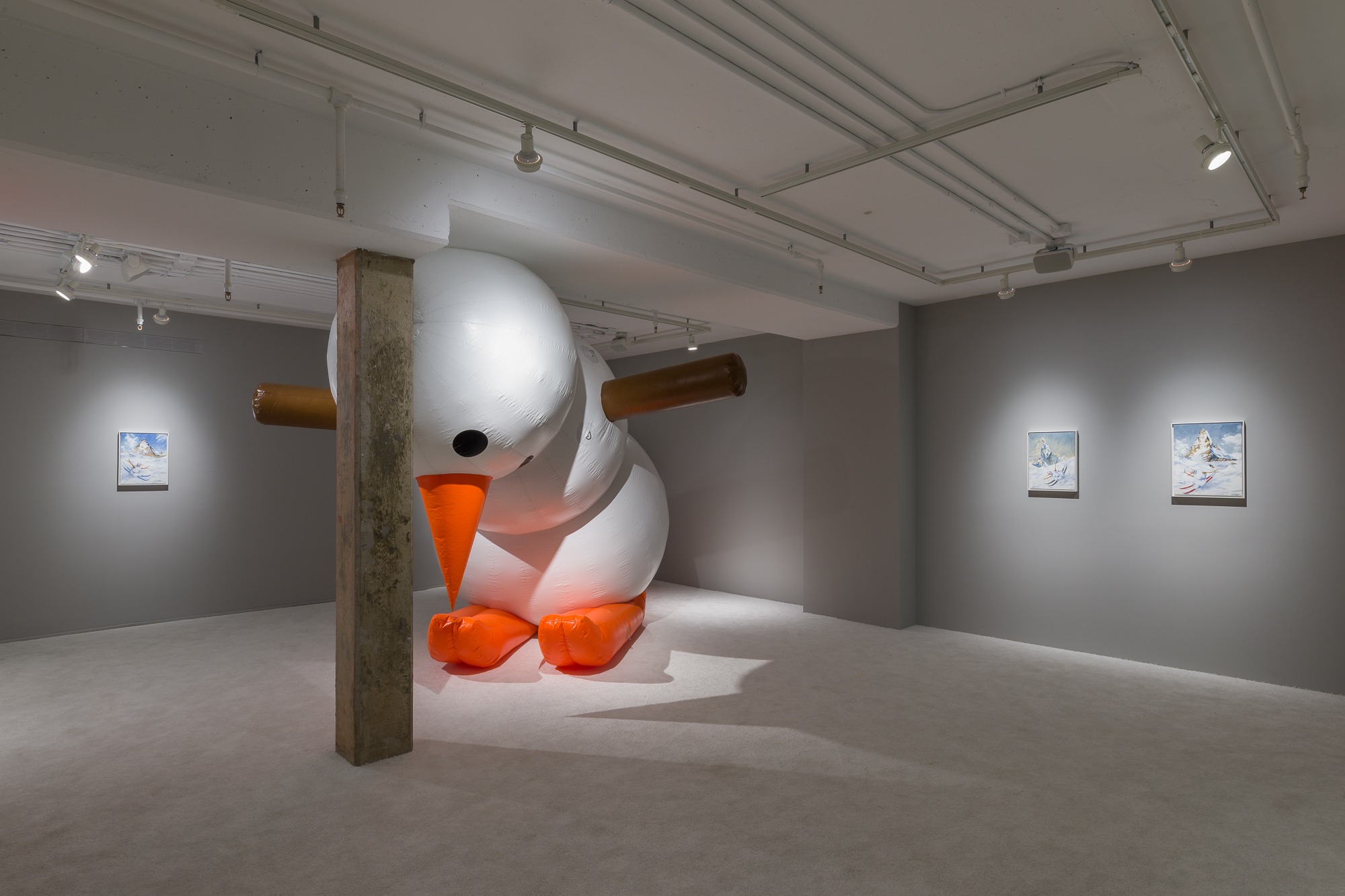 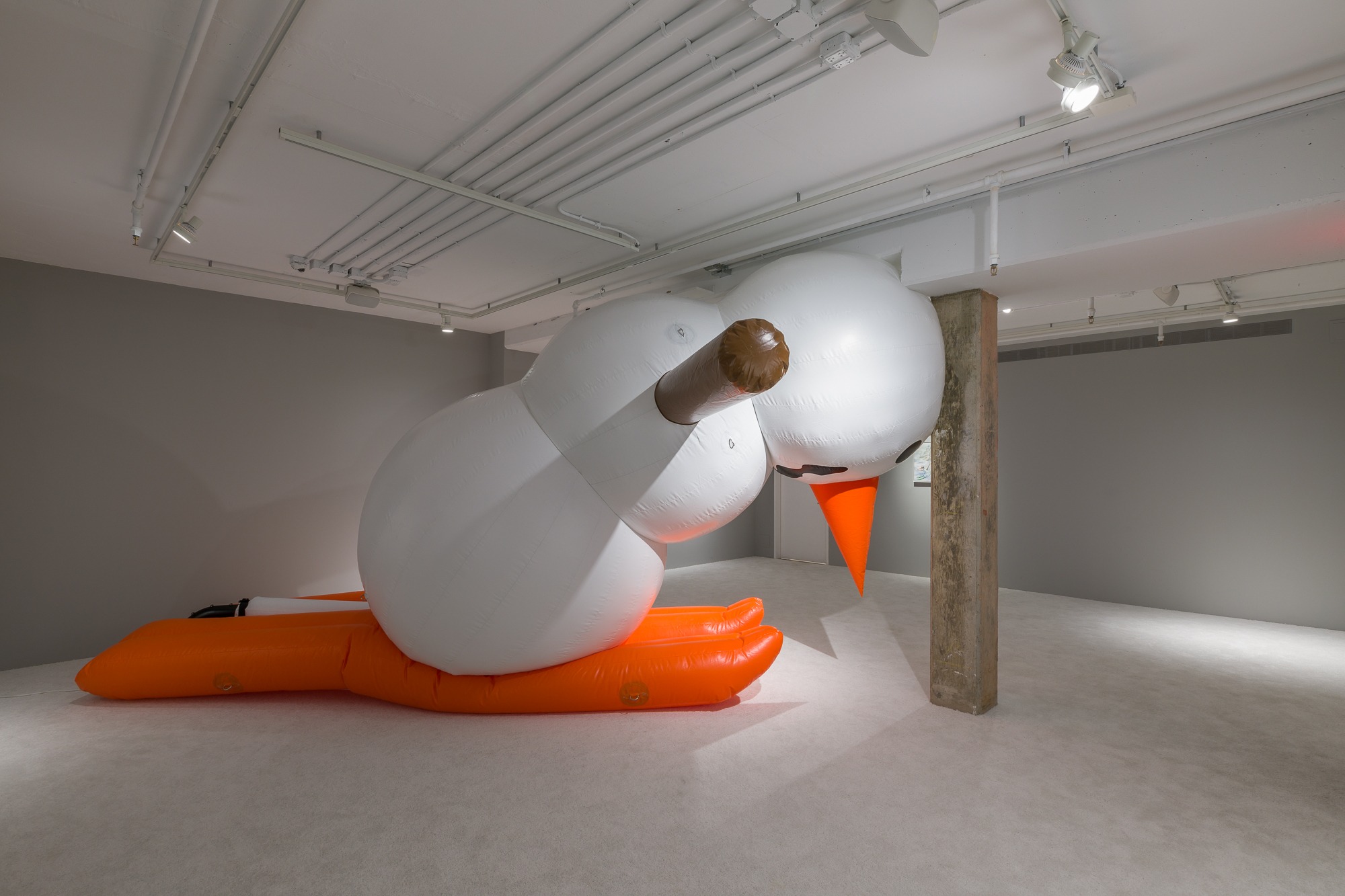 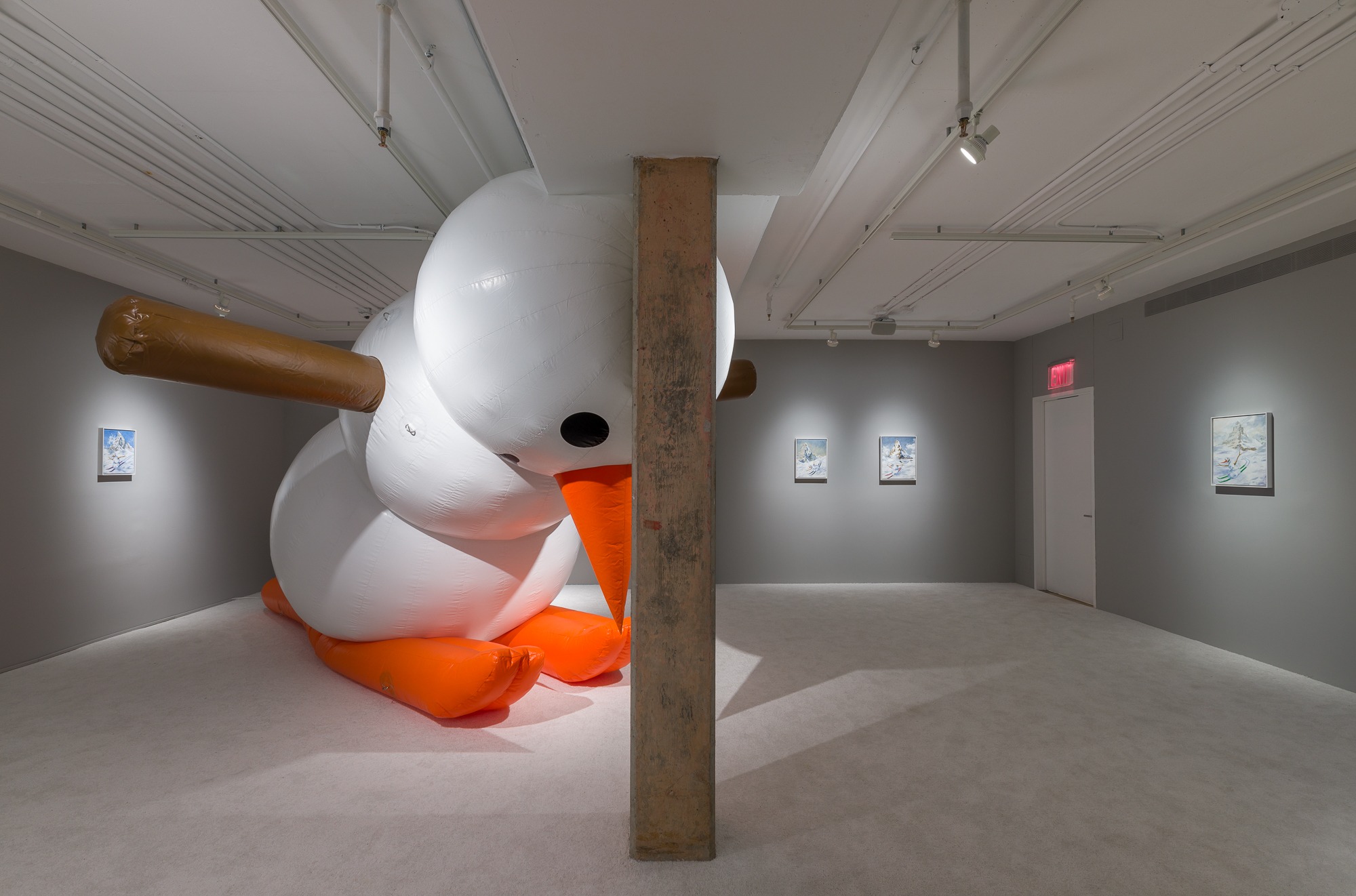 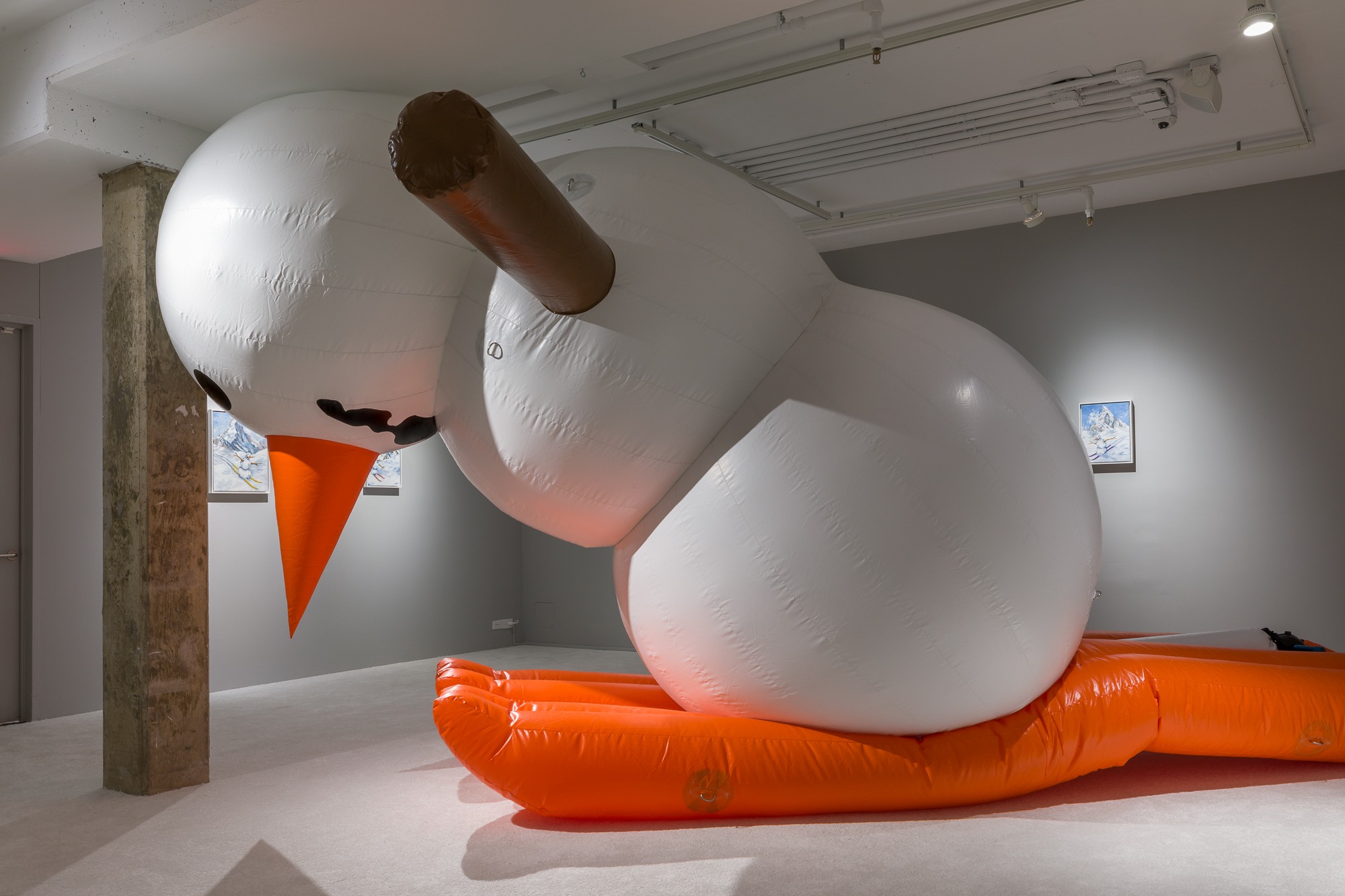 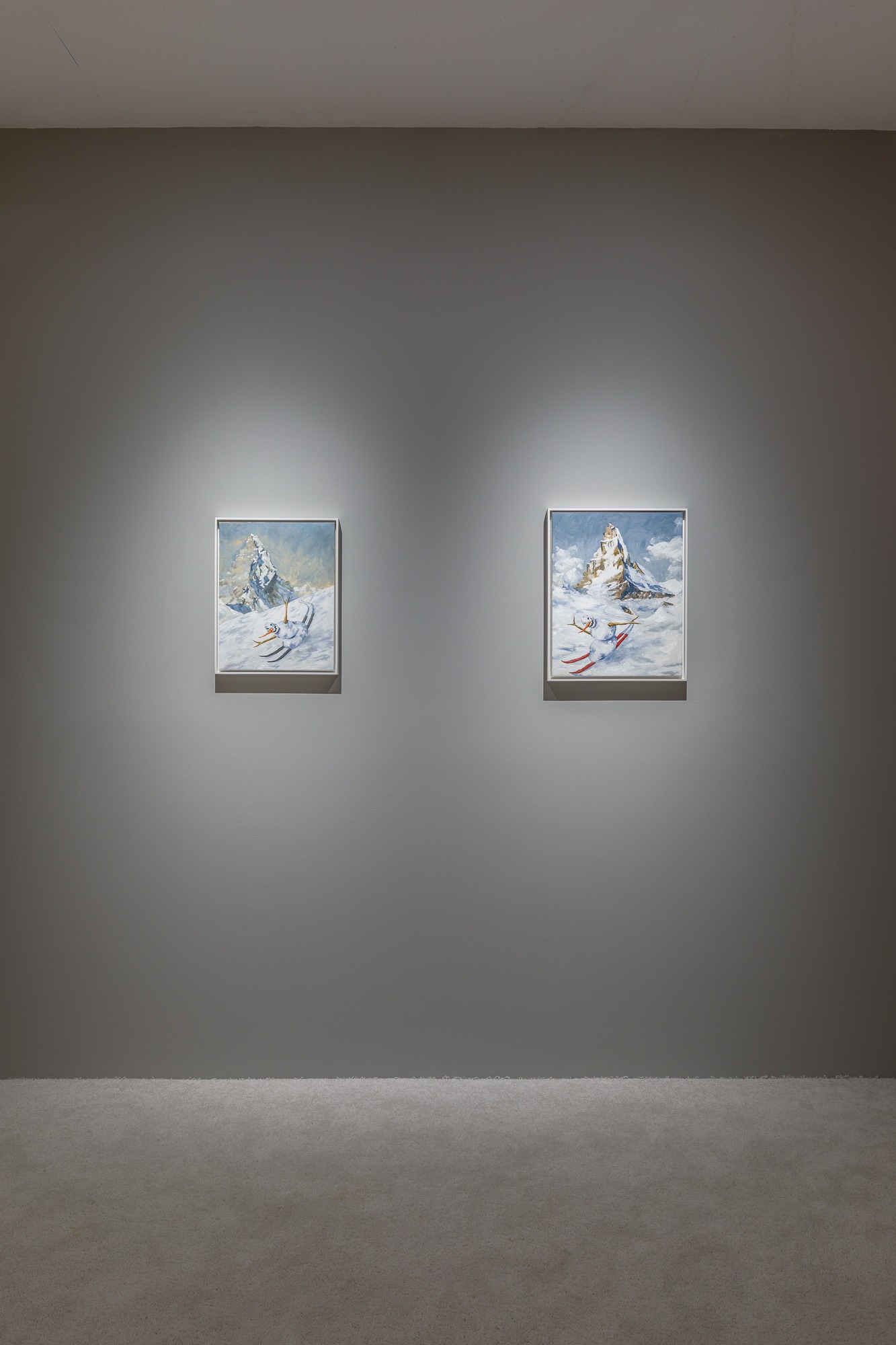 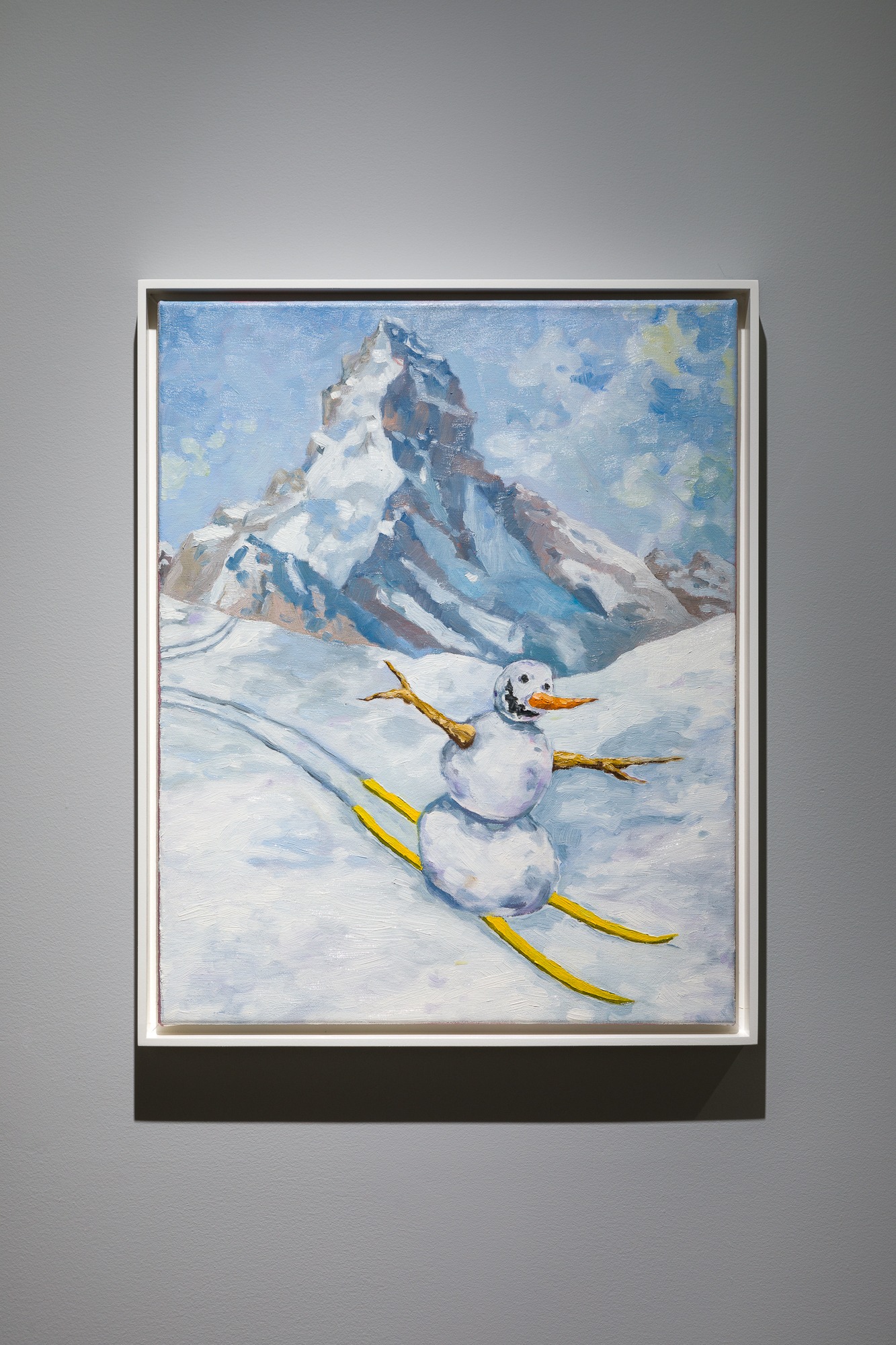 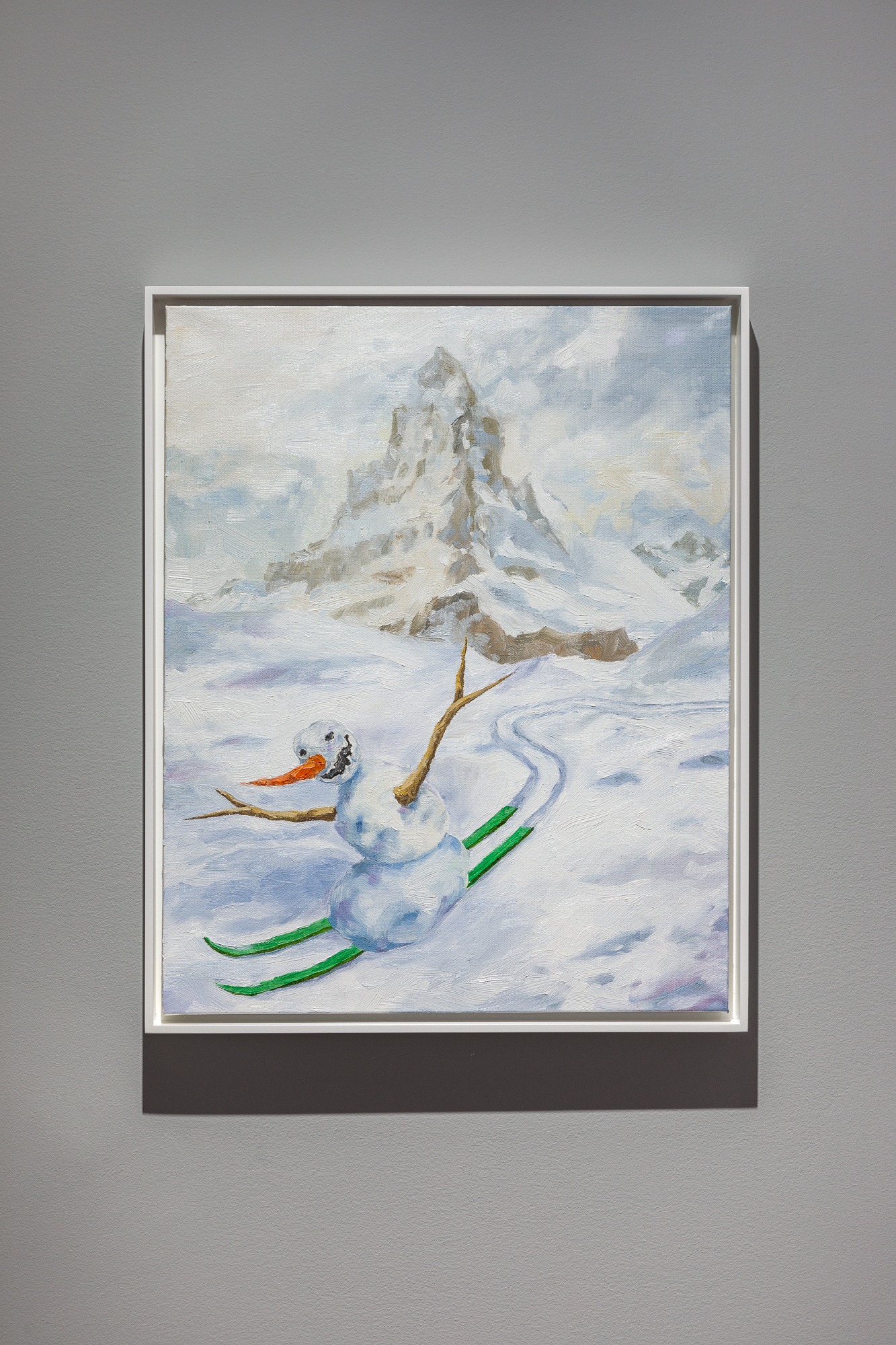 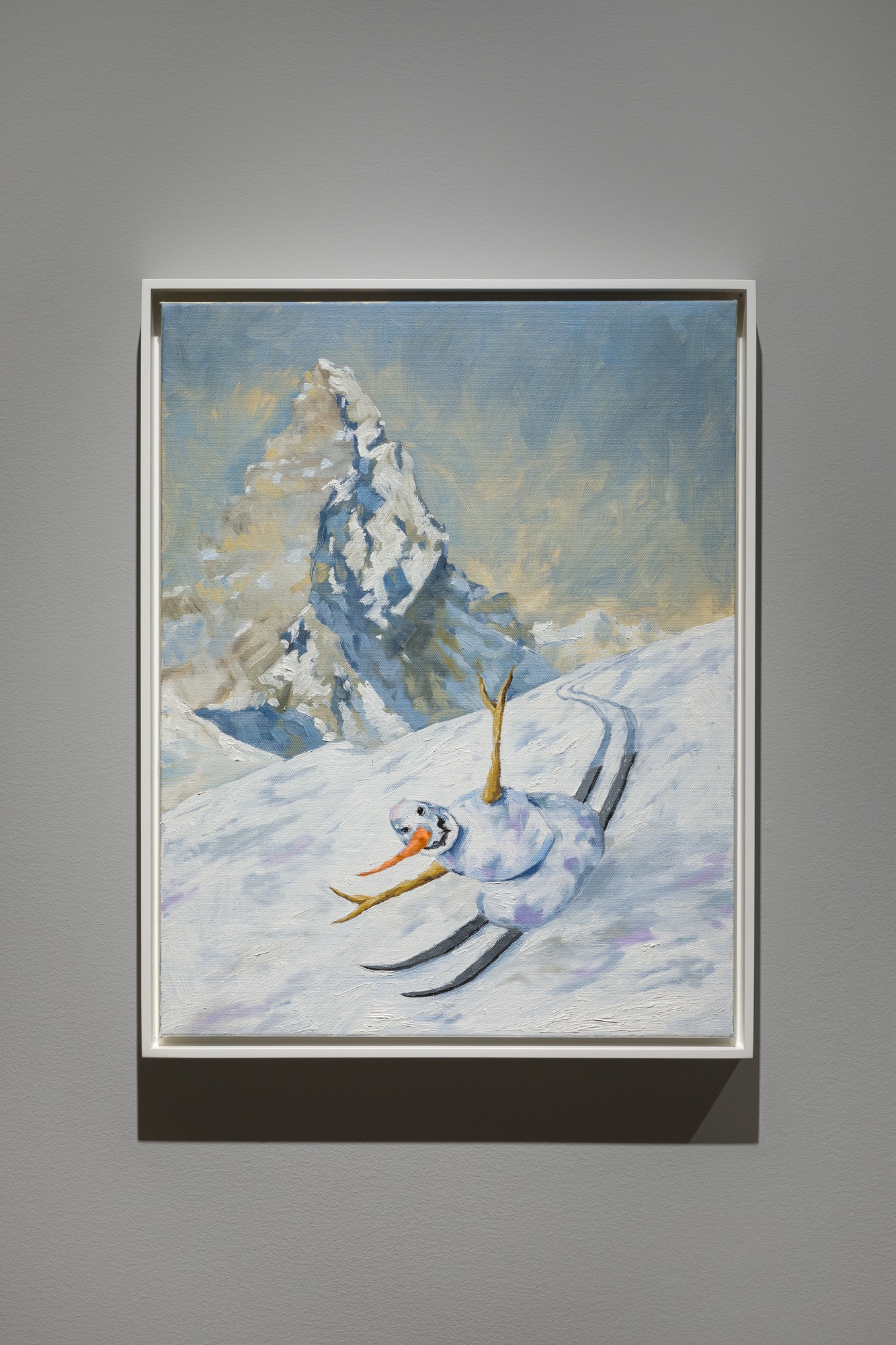 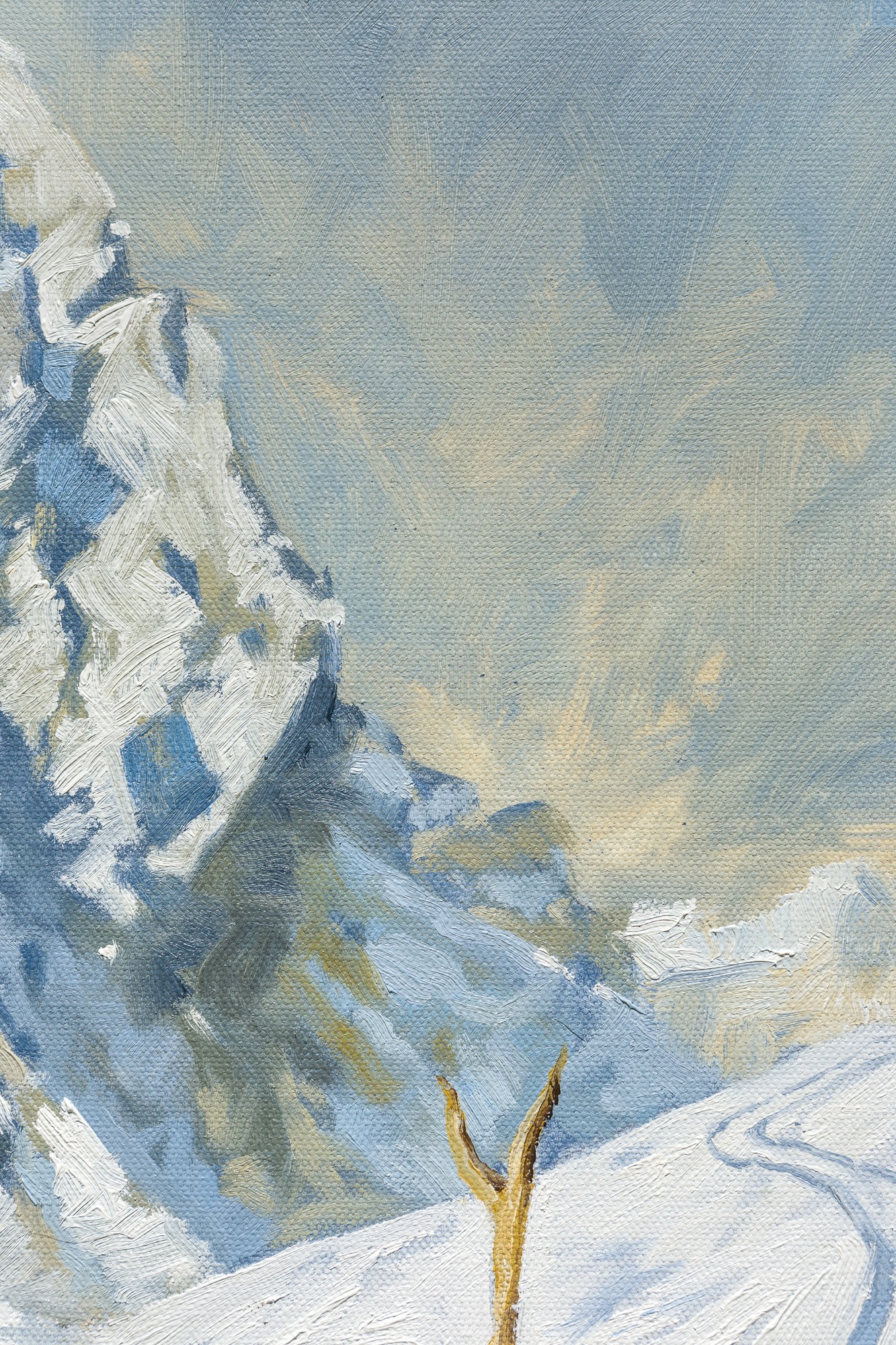 Swiss Institute is delighted to present Skiing Snowman, the first institutional solo exhibition in the United States by Jan Kiefer. Born in Germany and living in Basel, Switzerland, Kiefer makes artworks that often survey particularities of European culture. Varied painting techniques, traditional craft and readymade sculpture are deployed by Kiefer to wryly examine the transmission of inherited ideals regarding art, labor and recreation. At SI, Kiefer turns his attention to Alpine tourism and the figure of the snowman, a recurring character he has depicted on skis both in painting and sculpture since 2016.

While considered a vicious folkloric monster prior to advances in domestic heating made during the First Industrial Revolution, the snowman has since been widely recognized as a friendly symbol of wintertime joy. Kiefer draws from both histories in the creation of his ambivalent protagonist. In the center of the gallery sits a towering, 15-foot-tall inflatable snowman perched on orange skis. Pitched forward and buckled under the gallery’s ceiling, the snowman casts a blank stare downward and bears a crooked, toothy grin. The smile is echoed in the paintings that hang in the gallery. On each canvas, a snowman careens down the slopes of the Matterhorn, a colossal, iconic mountain peak that straddles the border of Italy and Switzerland, staring outward toward the viewer.

In these serial, fantastical vistas, Kiefer draws upon tales of distraction and obliviousness, paying particular attention to the whimsical, disciplinary stories and illustrations of 19th century German children’s author Heinrich Hoffmann’s Der Struwwelpeter, as well as Swiss writer Robert Walser’s 1917 picturebook Einer, der nichts merkte (The man who noticed nothing). With the scene set as a kitsch landscape reminiscent of the Alps found in advertisements and postcards, Kiefer presents his snowmen as unwitting fools hurtling through an idealized version of a now disappearing landscape.

This exhibition is organized by Daniel Merritt, Associate Curator.

SI Programming is made possible in part with public funds from Pro Helvetia, Swiss Arts Council; the New York State Council on the Arts, with the support of Governor Andrew Cuomo and the New York State Legislature; and the New York City Department of Cultural Affairs in partnership with the City Council. Main sponsors include LUMA Foundation, the Andy Warhol Foundation for the Visual Arts, and Friends of SI. SI gratefully acknowledges Swiss Re as SI ONSITE Partner, Vitra as Design Partner, Crozier Fine Arts as Preferred Shipping Art Logistics Partner, Sister City as Hotel Sponsor and SWISS as Travel Partner.
www.swissinstitute.net