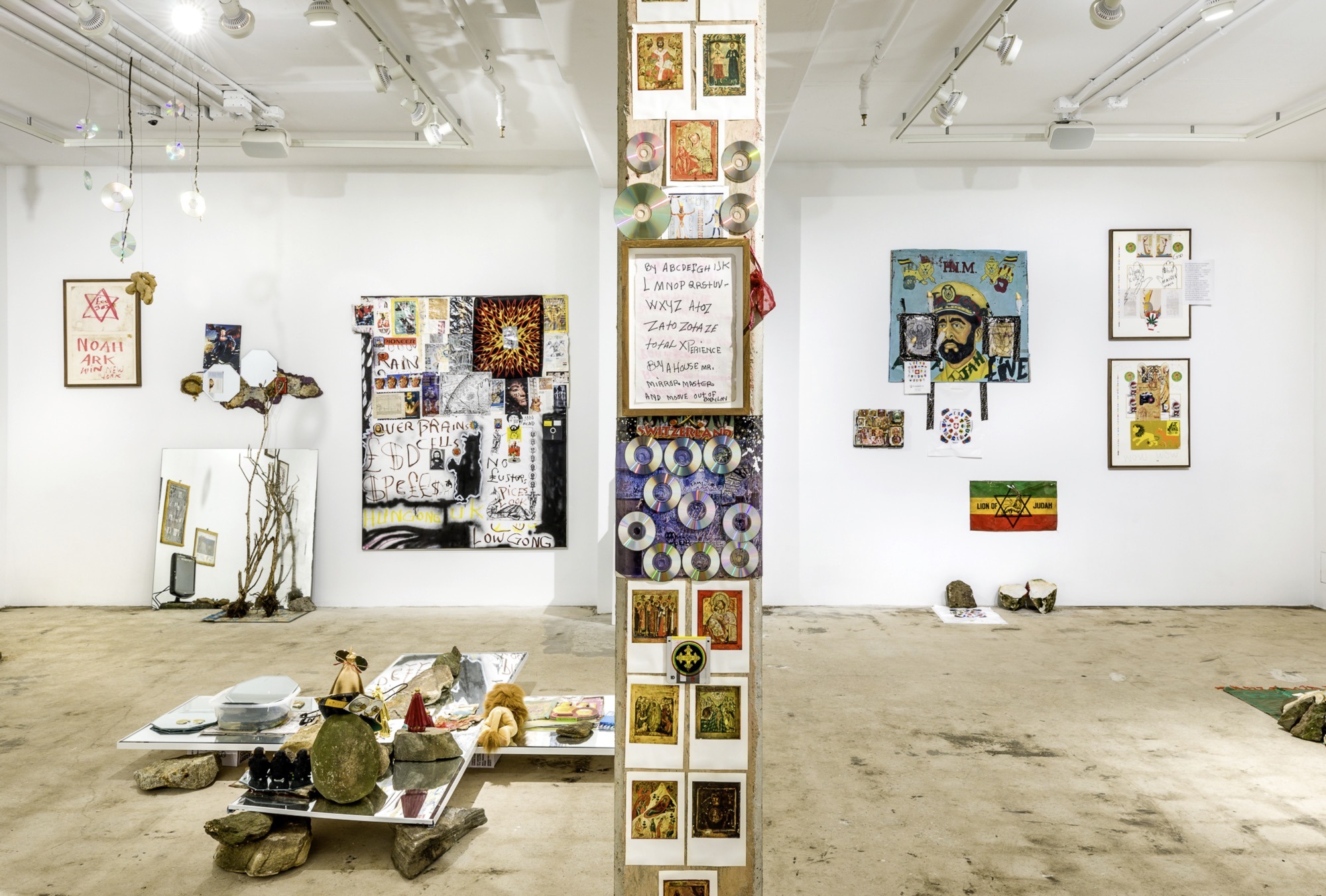 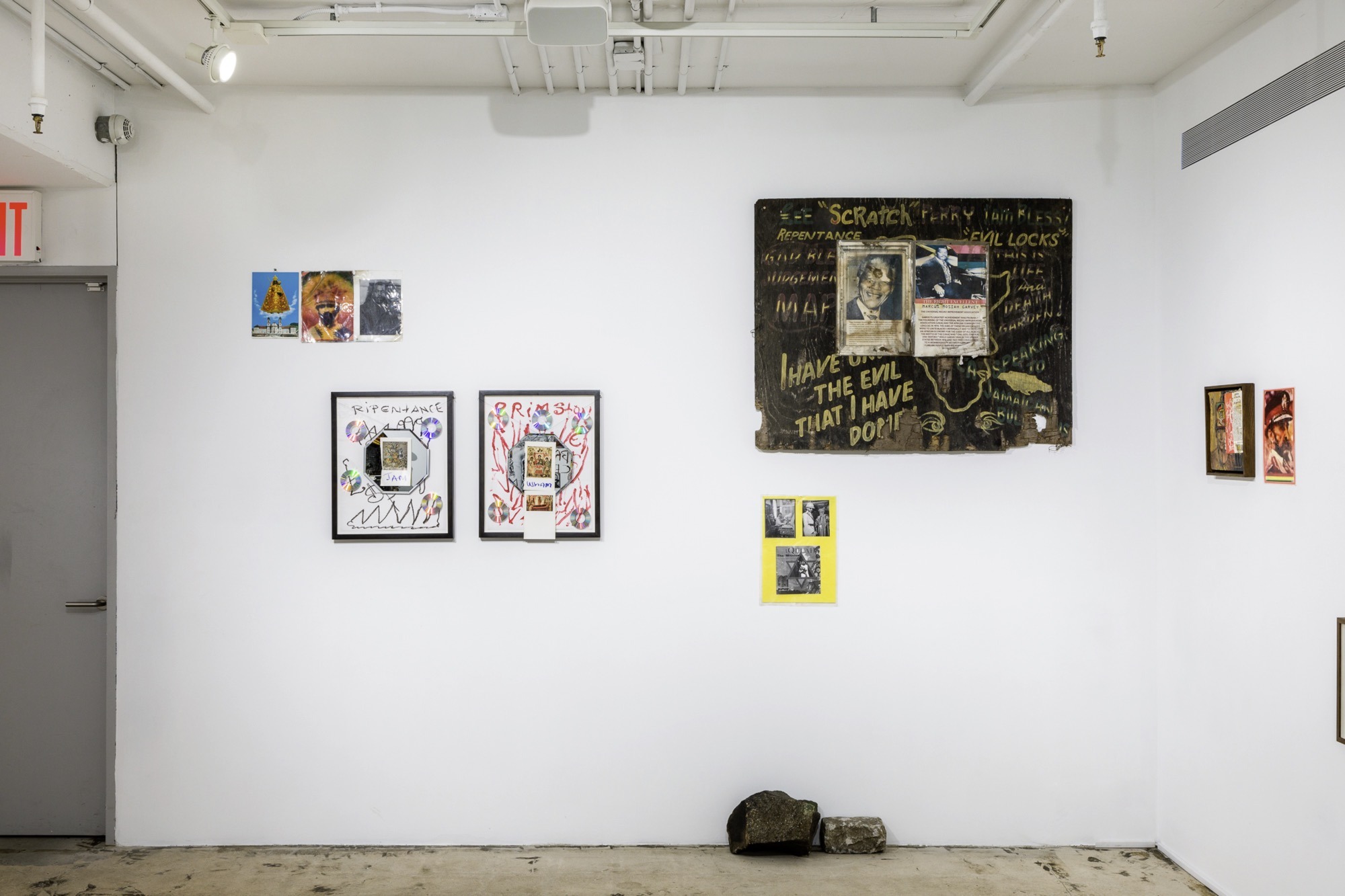 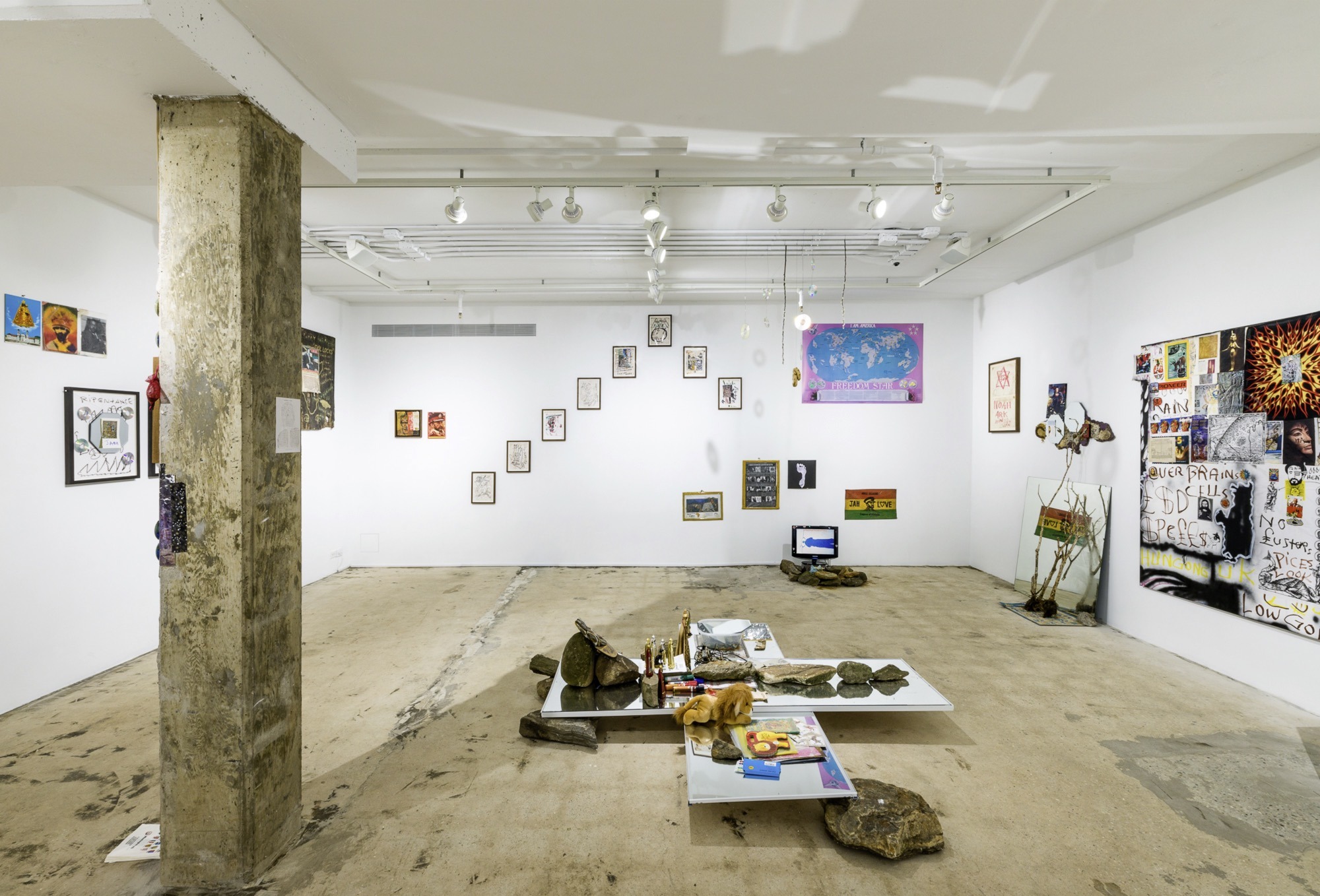 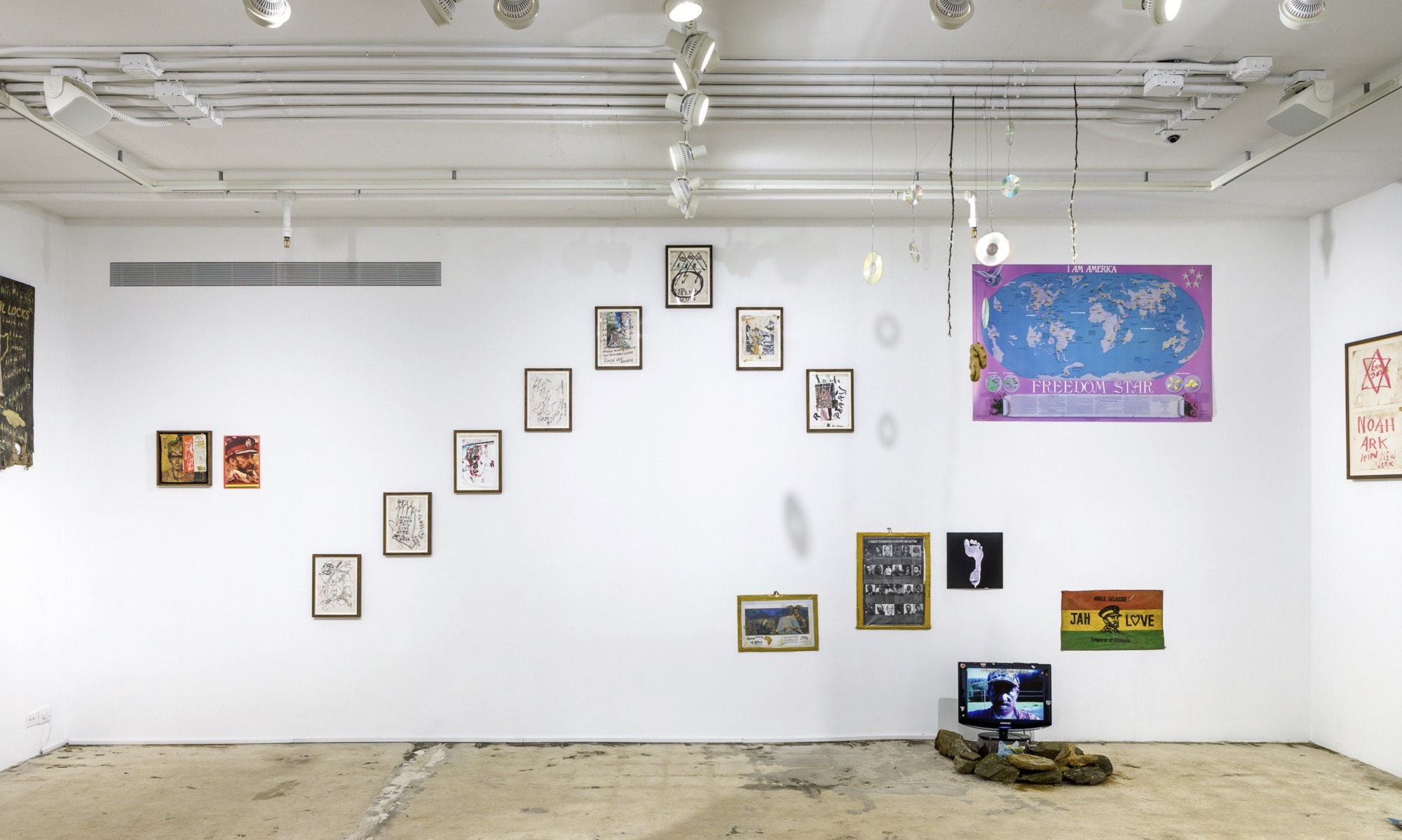 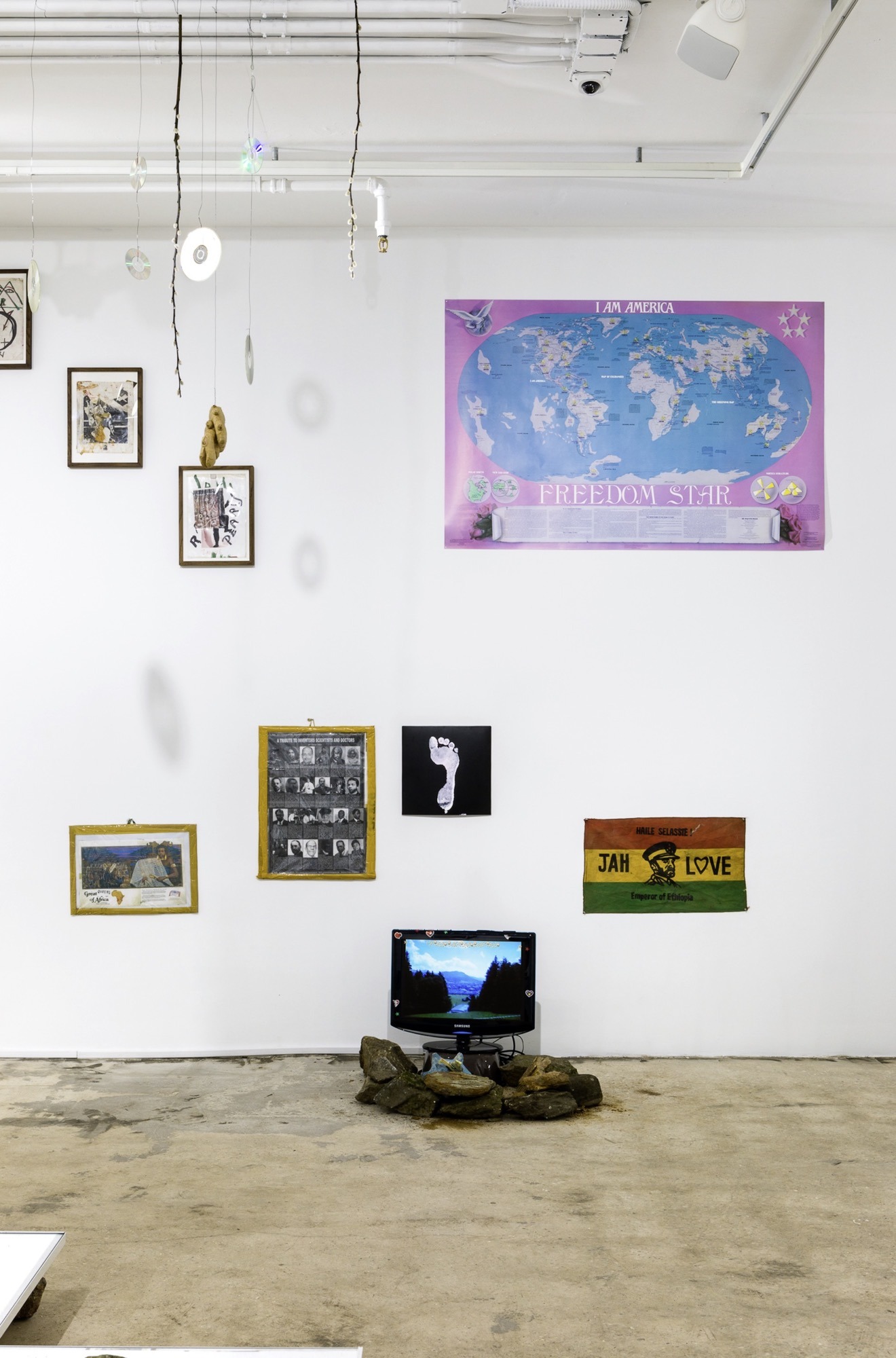 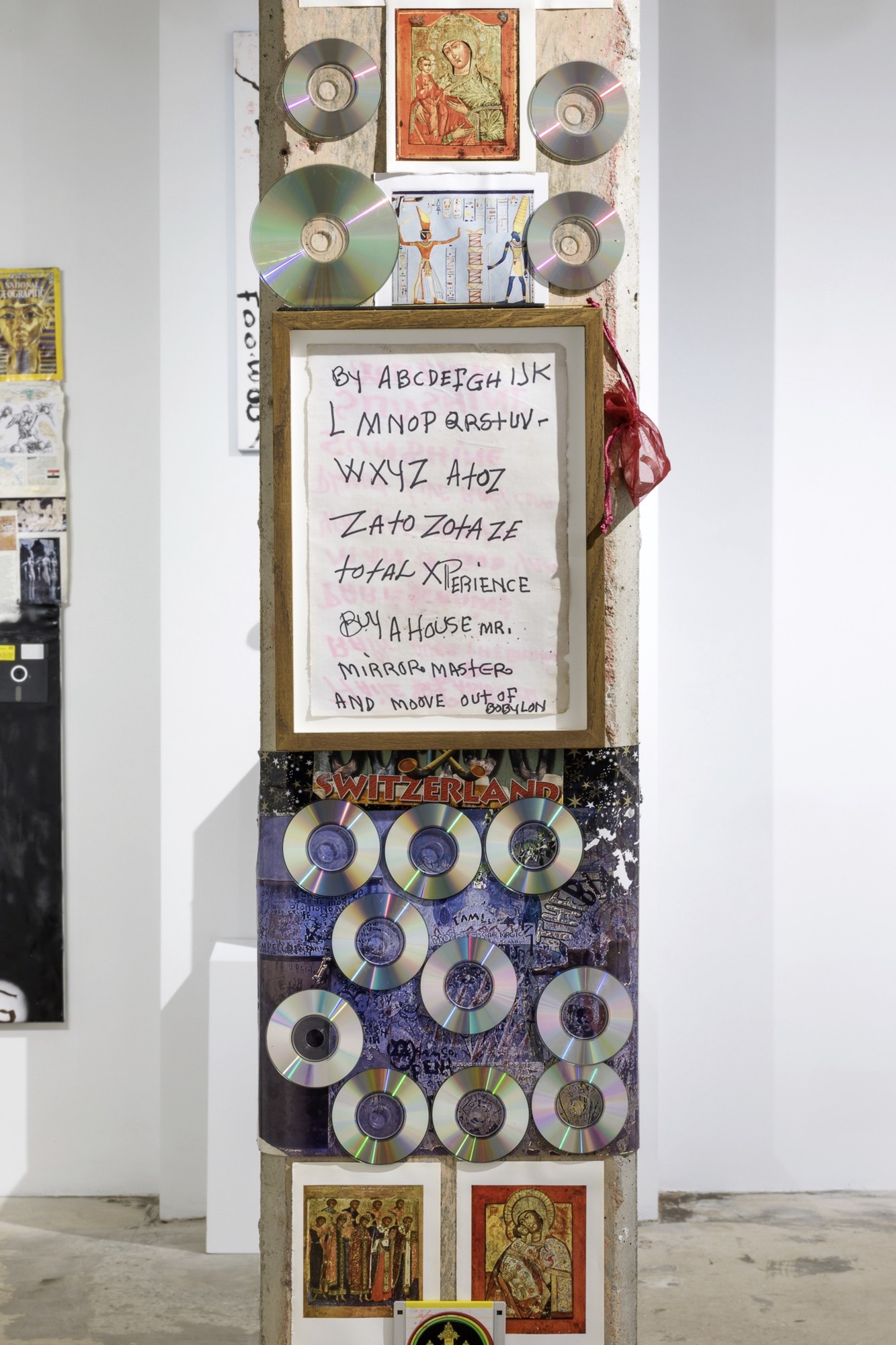 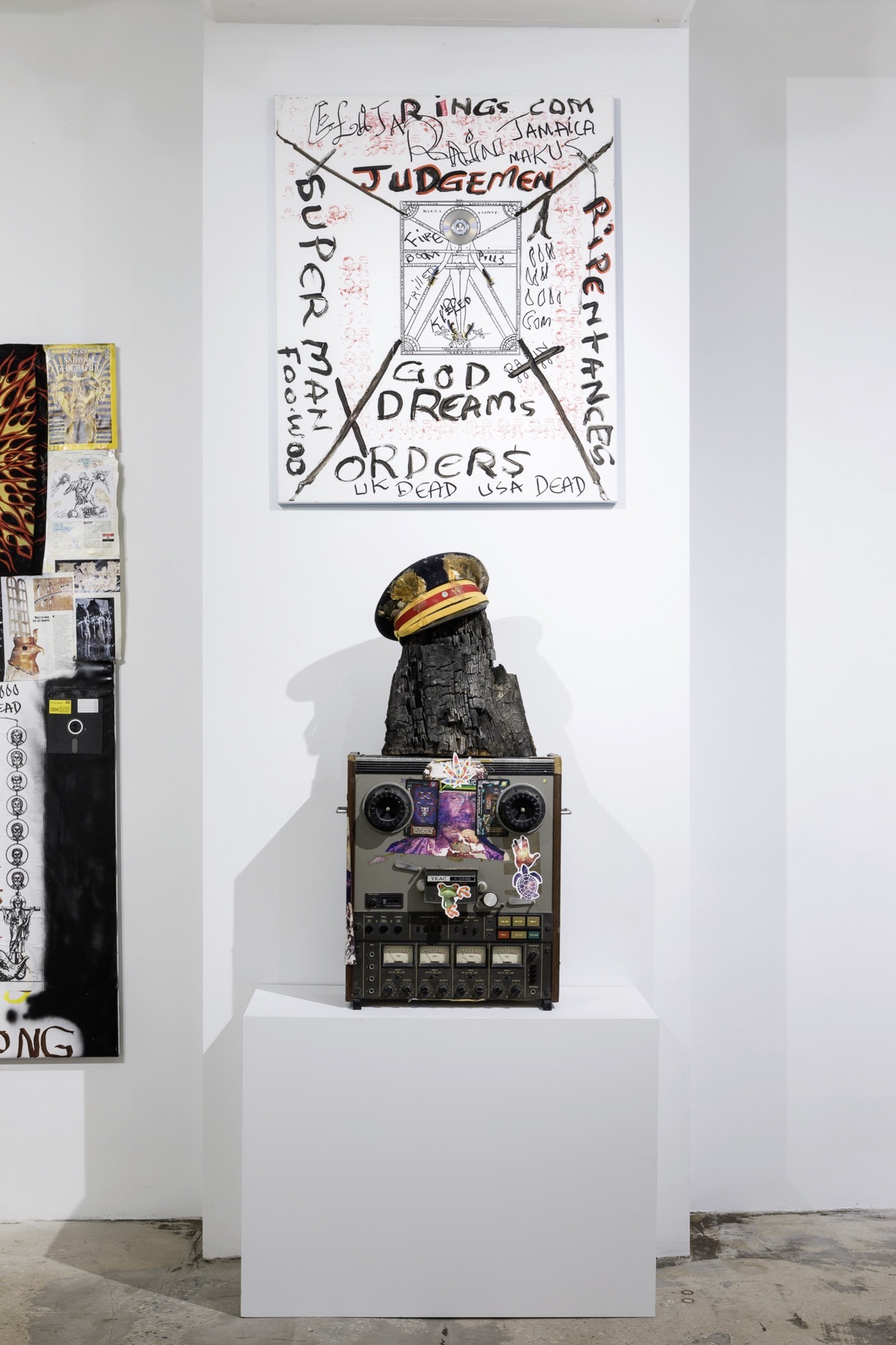 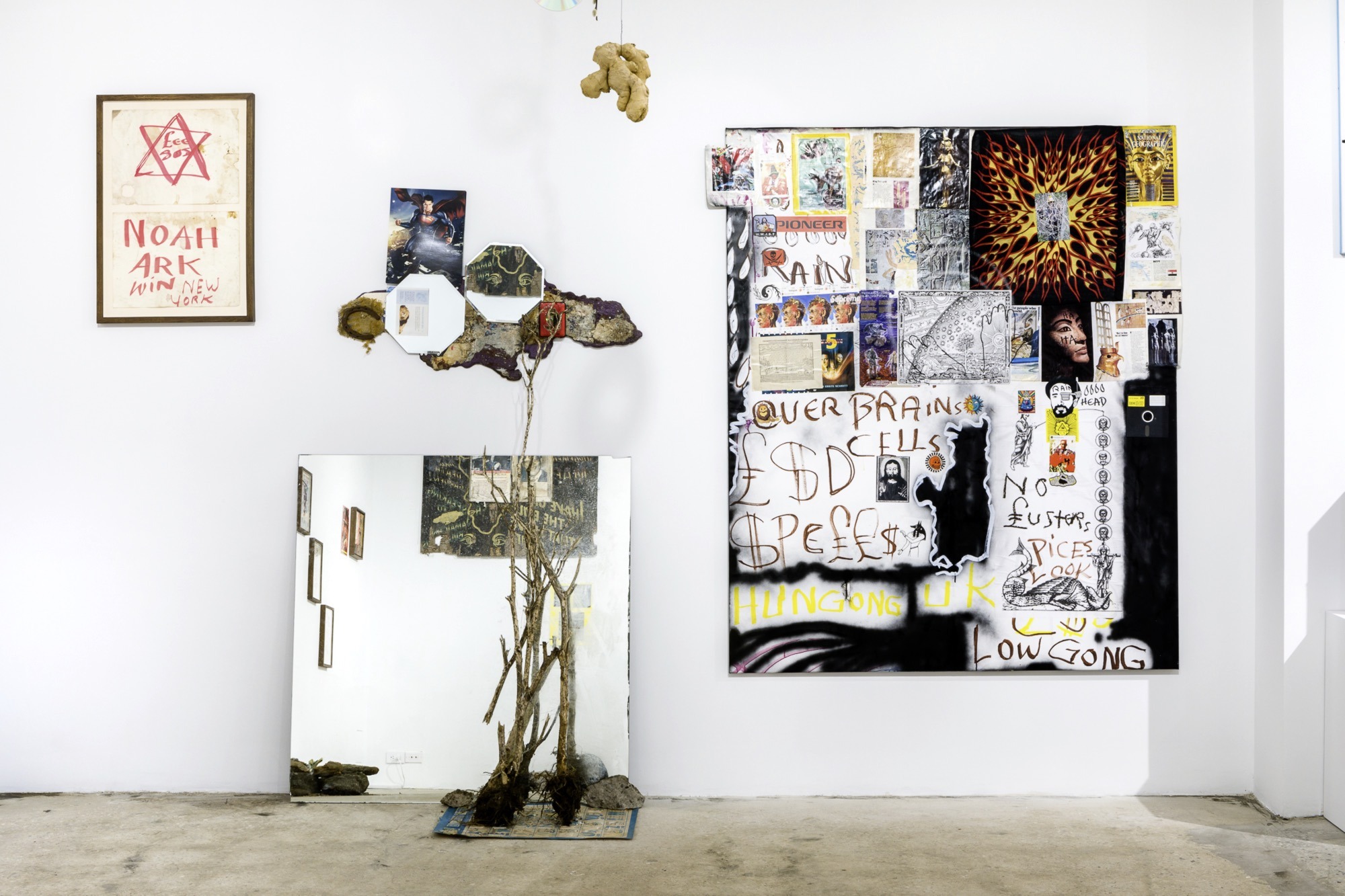 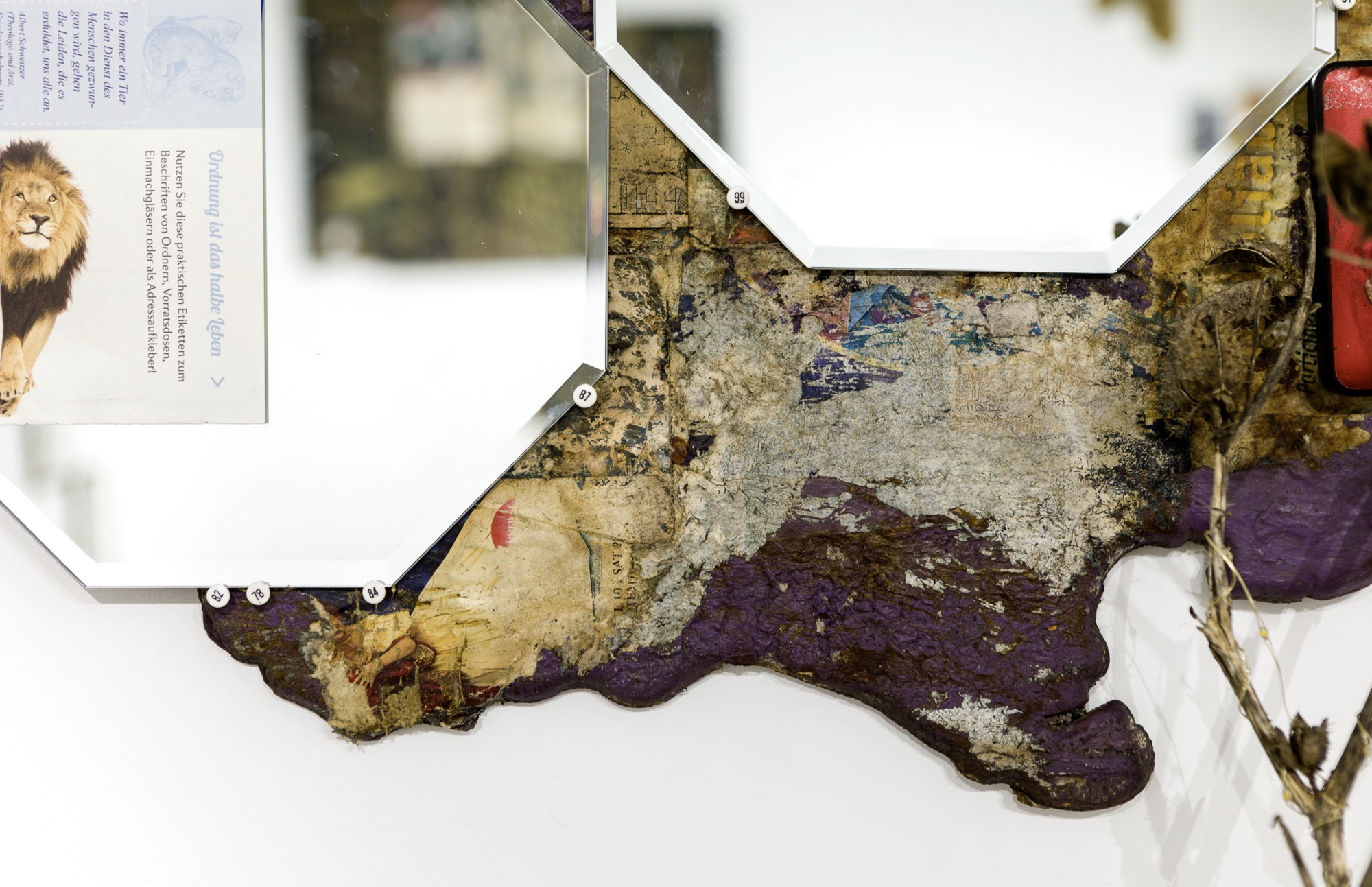 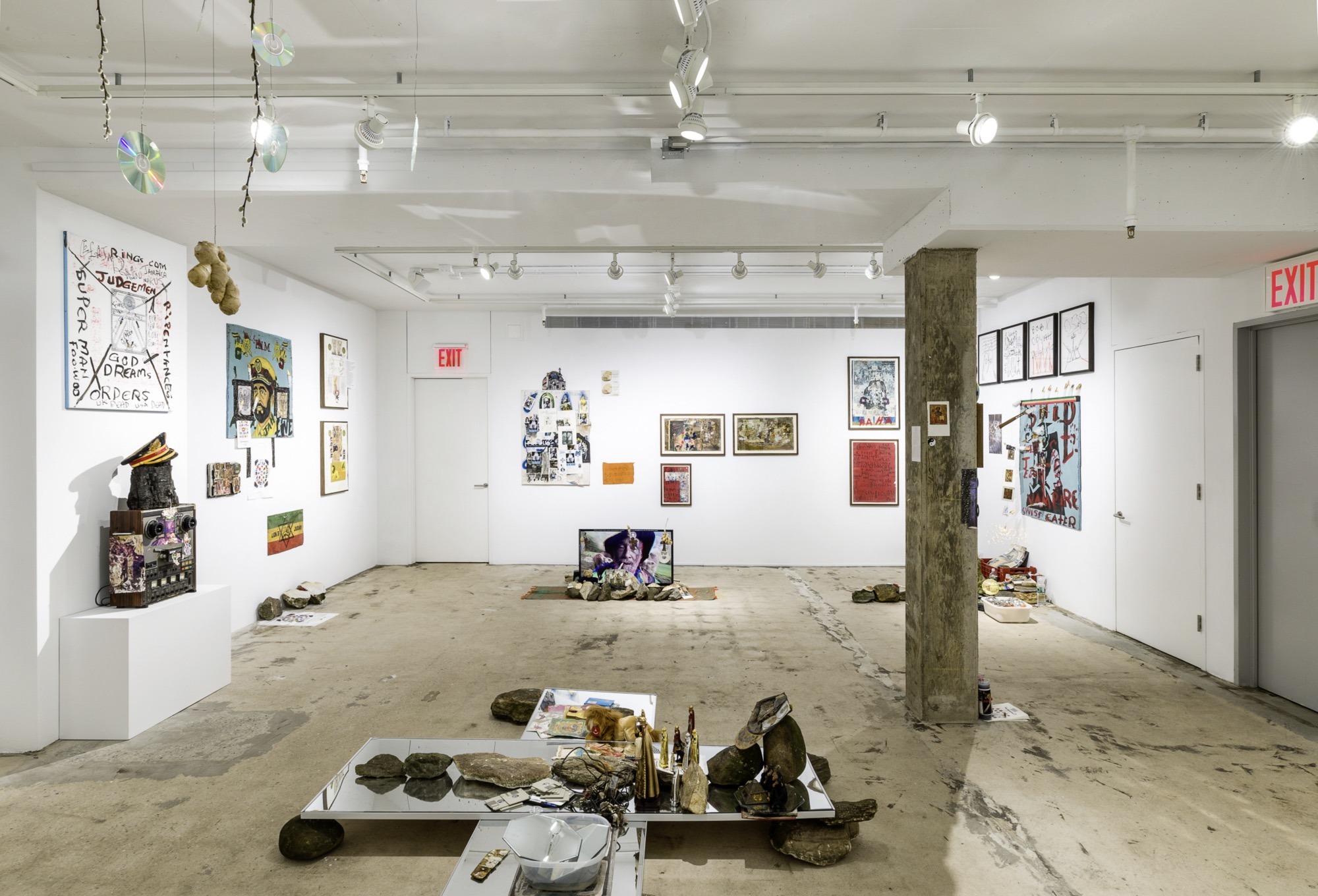 Swiss Institute is pleased to present MIRROR MASTER FUTURES YARD, the first ever institutional exhibition of artwork by Lee “Scratch” Perry. The show will feature a newly commissioned sculptural installation, as well as works produced in Perry’s legendary Black Ark studio in Kingston, Jamaica in the late 1990’s and in his Blue Ark studio in Einsiedeln, Switzerland, where he now lives.

Lee “Scratch” Perry is renowned for his pioneering role in the development of reggae and dub music, along with his spectacular presence as a self-proclaimed prophet donning mirror-jeweled hats and painted boots lined with bible pages. Ever since he hand-painted stripes onto newly-produced Heart of the Congos record covers in 1977, Perry’s artistic output has gradually developed into a multidisciplinary practice that expands over the rooms he inhabits, the clothes and accessories he wears, and the totemic structures he erects outside his homes.

The walls of the gallery at SI feature works and pictorial material from Perry’s studios, where a collection of images has accumulated over time into a Byzantine patchwork of symbols and signs. In the Jamaican tradition of the yard show, the site-specific floor installation takes the form of a spiritual home ground that Perry has arranged ritualistically with rocks and stones gathered from the shores of the island of Manhattan and basins filled with water from the Hudson and Harlem Rivers. Characteristic of Perry’s Gesamtkunstwerk style, figurines of the Black Madonna of the rural alpine Abbey of Einsiedeln are placed among laptop computers, printed out stacks of poetry, dug-up notebooks filled with spiritual graffiti, mirror balls and CDs, along with a plethora of other materials,

Perry’s mode of art making is process-oriented and informed by music production techniques such as re-mixing, re-versioning and modulating existing materials. At Swiss Institute, the installation includes signs that he has commissioned and painted over, collages made collaboratively, and fan art. It combines the objects that he relentlessly collects, such as microphone cables, international currency, shiny stickers with the face of Haile Selassie, stuffed animals, and octagonal mirrors, as well as video recordings of his daily life. Deeply influenced by a fusion of religious beliefs and practices, including the Yoruba tradition of Ettu, Obeah, Rastafarianism, and Christianity, Perry transforms these materials by burning, painting, layering, collaging, gluing, exposing to sun, wind and rain, and burying. In this way, Perry incorporates them into a never-complete artistic cosmos untethered from notions of linear space and time.

On the occasion of Lee “Scratch” Perry: MIRROR MASTER FUTURES YARD, Swiss Institute is pleased to present a public program including a reasoning and listening by Ishion Hutchinson and Sheldon Shepherd on Friday, April 26 and a conversation between Diedrich Diederichsen and Nicole Smythe-Johnson on Wednesday, May 1. Details to be announced soon.

About Lee “Scratch” Perry
Lee “Scratch” Perry OD (b. 1936 in Kendal, Jamaica) lives and works between Einsiedeln, Switzerland and Negril, Jamaica. He has worked with artists including Bob Marley and the Wailers, Junior Murvin, the Beastie Boys, and The Clash, among many others, and was awarded a Grammy for Best Reggae Album in 2003. Recent projects include Lee “Scratch” Perry at Haus zur Liebe, Schaffhausen, Switzerland (2018) and Jamaica Jamaica! at Philharmonie de Paris, France (2017).

About Lorenzo Bernet
Lorenzo Bernet (b. 1986 in Zürich, Switzerland) studied at Akademie der Bildenden Künste, Vienna and Zürcher Hochschule der Künste. He is a co-founder of MUDA MUDA MURI in Zürich.

SI Programming is made possible in part with public funds from Pro Helvetia, Swiss Arts Council; the New York State Council on the Arts, with the support of Governor Andrew Cuomo and the New York State Legislature; and the New York City Department of Cultural Affairs in partnership with the City Council. Main sponsors include LUMA Foundation and Friends of SI. SI gratefully acknowledges Swiss Re as SI ONSITE Partner, and Vitra as Design Partner.
www.swissinstitute.net