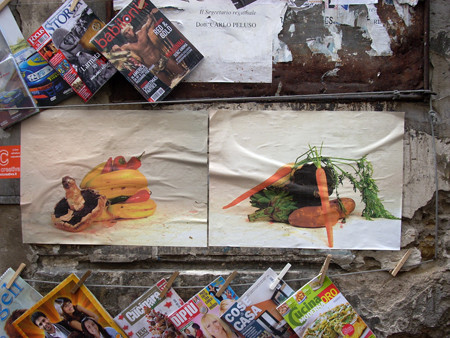 For the occasion of a cycle of presentations entitled “Perché Napoli?” [Why Naples?] Lucie Fontaine has conceived T.D.P.D.T., a puppet show theater that addresses with the mythical past of the city. Using Naples’s most well-known sites—Lungomare, Napoli Sotterranea [Naples underground] and the Maschio Angioino castel—along with key locations of the artistic community from Seventies until today—Piazza del Plebiscito, the Campagnola restaurant and Piazza dei Martiri—12 characters from the art world follow one another in a series of imaginary dialogues.
Following the schizophrenic nature of Lucie Fontaine, characters and dialogues are not logically linked. Working through stereotypes and random systems, Lucie Fontaine embodies a comedy of the absurd where artists, gallerists, curators and collectors are contented material and at—the same time—an open source to unexpected manipulations.
Utilizing different levels T.D.P.D.T. presents itself as a platform where diverse issues engage in dialogue with humorous undertones. Conceived as a reflection of the system of production and communication, Lucie Fontaine proposes a project that uses the cultural humus of Naples as a ploy to demonstrate the growing interchangeability within cultural systems. In other words, we assist in the passage from “role-playing” to an ever more fluid co-habitation of different players who act within the art field.

Lucie Fontaine is an art employer who lives and works in Colmar (FR). Her two* art employees used to define her the Jamie Lynn Spears of contemporary art, “pregnant and in search of easy success.”

* L'Anti-Oedipe was written by the two of us, and since each of us was several, we were already quite a crowd.' Gilles Deleuze and Felix Guattari, A Thousand Plateaus, 1. Introduction: Rhizome.

Invited for the second phase of “Perché Napoli?,” Jordan Wolfson engages the spirit of Naples through a sound piece realized for the exhibition space at Piazza Amendola and a series of works disseminated throughout the city. At a comprehensive range of sites—from the historic center to Chiaia—50 images of rotting fruits and vegetables are posted on the walls with obsessive and nauseating proliferation. The meaning behind this series is an accompanied by a barebones recording broadcasted within the exhibition space. Speaking about production, diffusion, and standardization, Wolfson elaborates on a system of concepts in which food is used as a gambit for underlining the increasingly homogenized level of expression within today's cultural landscape. Working with still life, the artist gives form to a project that combines contemporary and classic attitudes; he dialogues with personas like Caravaggio - who sought refuge in Naples after escaping Rome. At the same time, Wolfson reaffirms the themes of deterioration already central to his practice, as seen in the 16mm film Dreaming of the Dream of the Dream in which crashing waves become a self-referential memento mori for the degradation of the film itself. These two* works, the images of eroding sand and decomposing natural produce, entrust their own auras to mechanisms of distribution and destruction.

Jordan Wolfson lives and works in New York and Berlin. T293 gallery is currently hosting his second solo show at the space at via dei Tribunali.

* “’Master, you handed over me 2 talents; see, I have made two more talents.' His master said to him, ‘Well done, good and trustworthy slave; you have been trustworthy in a few things, I will put you in charge with many things; enter into the joy of your master.’”
Matthew 25:22—24

Ylva Ogland is the third artist invited in “Perché Napoli?”. Over the duration of the show the artist will transform the exhibition space into a peep show. Nobody will be allowed to enter the gallery. The only way to experience this show will be by looking through the hole placed in the center of a wall that represents the border between two* universes: reality and representation. Inside the space Ogland will continue her series “Xenia,” directly connected to Caravaggio’s eponymous Still Life with a Basket of Fruit. Each day these new versions of “Xenia” will be placed in front of the peephole, shaping the perception of the entire project with a profoundly voyeuristic overtone. The artist will also invite her mirror twin sister Snöfrid to embrace a series of other identities as part of the project. Ogland serves sexual motifs in the form of fruits and flowers via Xenia, while Snöfrid serves the following: T293 will be presented as a logo on the wall that divides reality and representation. Lucie Fontaine will be on the wall while Snöfrid portrays her portrait. The Fruit and Flower Deli emblem will also appear on the wall, representing the second stop of an Odyssey, which started in Stockholm and will continue to Vilnius, Shanghai, Tokyo, Berlin, Milan, London and other places to be announced by the Oracle of Fruit and Flower Deli.

Ylva Ogland lives and works in New York. She uses the world as a palette • Fruit and Flower Deli is a New York gallery that has a harbor in every continent. It is the vessel for the Oracle, which is protected by the Keeper. Where Fruit and Flower Deli is, it is always a home for David Adamo, Julieta Aranda, Judith Braun, Jota Castro, Rainer Ganahl, Nicolás Guagnini, Tracy Nakayama, Trong Nguyen and Karin Schneider • Snöfrid is Ylva Ogland’s mirror twin sister, she lives inside the mirrors and she likes pancakes with golden syrup. Sometimes she appears in the real world as vodka

Claire Fontaine is the fourth artist invited in “Perché Napoli?.” On this occasion the artist has realized the video entitled Tamed in which a retired Neapolitan, has been interviewed in his cellar situated in the historical center. The space contains specialized aquariums, a large tank, filters and heaters which host carnivorous fish.

In a sort of guided tour through the cave-like cellar, the video presents in a simple and direct way the passion of a man for exotic animals and aquariums. We listen to his stories and in doing so Claire Fontaine asks us to explore a world that is immaterial and aquatic, violent and mute, embracing the city’s identity that becomes a metaphor of something ever more disquieting.

Indeed, the usage of such a peculiar scenario brings the spectator in front of a myriad of possible interpretations, although two* in particular come to mind spontaneously: on one hand the carnivorous fish stands as a symbol, spotlighting mechanisms of submission that have always characterized the concept of labour. On the other hand, using a cellar for a video in which fish are the protagonists seems to be a sarcastic commentary on the religiousness of the city—in the Roman era the first communities of Christians started using the acronym and then the symbol of a fish as a secret code—as well as a soft critique of Naples’ glorious past (the catacombs), which now is nothing more than a mere tourist attraction.

Claire Fontaine defines herself as a ready-made artist who emerged from the standardization of identity produced by capitalism. Her solo show “Interior Design for Bastards,” is currently on view at T293 Via dei Tribunali at the gallery space.

“Hegel's discussion of the dialectic of the Master and Slave is an attempt to show that asymmetric recognitive relations are metaphysically defective, that the norms they institute aren't the right kind to help us think and act with to make it possible for us to think and act”. Robert Brandom