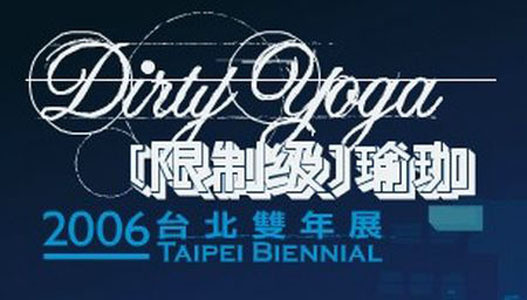 The theme of the fifth Taipei Biennial opening on November 4 this year is “Dirty Yoga”. The biennial attempts to use a currently popular pursuit as a symbol to explore, within the context of globalization, the conflicts that exist among different extreme values, and the various possibilities that may arise from them.

Since the 1960s, people have gradually turned from radical politics and ideology to a preoccupation with the approach to living, as manifested in the satisfaction of “desire” in our daily lives. Desire has replaced science and ethics as the primary social motivation for progress, while its essence and symbols undergo constant change. This highlights the increasingly important role played by consumerism and marketing mechanisms. This expression of desire is also a manifestation of energy. Increased desire leads to greater fear of loss. People today are afraid of losing their health, their beauty, their youth and their wealth. To counter their fear of facing this reality, they invent different spectacular spaces and collective activities. Gradually, these spaces and activities are replacing abstract religion and turning into a universal belief.

As these broad social changes unfold, the underlying structure of rational thought is also changing. Rational binary logic has long transcended the status of mental tool and become a modality of thought itself. Our largely dormant capacity to imagine productive thought occurring outside of binary dualisms subtly governs our way of perceiving and interacting with the outside world. With Western civilization slowly loosening its hegemonic grip on the rest of the planet, the power of the binary over our shared humanity shows corresponding signs of crumbling. Enemies and allies, good and evil, beautiful and ugly, rich and poor...today they shift about on unstable supports, more relativized with each rhetorical effort to incorporate the outmoded codes into the new meta-language of fear and desire. In recent years, artists everywhere have begun to pay attention to and promote a ‘third way’ of understanding the world -- not according to the direct opposition of a conservative social establishment and an anti-establishment, but beginning with a synthesis of the many, and leading to consensus and other forms of non-oppositional resolution.

The artists invited to this Taipei Biennial will participate in different forms in a discourse of ‘between-ness’ that produces hybrid, mutated, nomadic meanings that are always contingent, and often subject to multiple interpretations, just as the noun ‘between-ness” suggests a state of possessing two meanings and neither of those meanings at the same time. While the state of “between-ness”, like a utopia, may never be realized, it often leads to the possibility of understanding and recognition through some kind of confrontation, like that implied by the meanings of the words “restricted” and “dirty” in our daily lives.