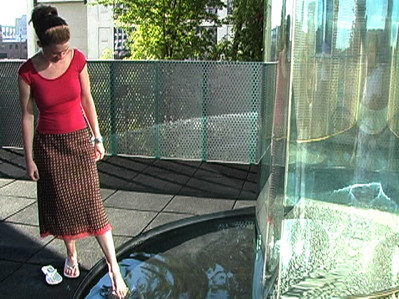 "But comedy – the key to my work is pretty much parody and comedy."
Dan Graham

Taka Ishii Gallery is pleased and honored to announce our first exhibition with pioneering American artist Dan Graham. Presently based in New York, Graham was born in 1942 in Urbana, Illinois. Graham’s work has been exhibited extensively, internationally and is represented in numerous private and public collections. Presently, Graham’s retrospective exhibition, Dan Graham: Beyond, organized by curators Bennett Simpson and Chrissie Iles is on view at the Walker Art Center, Minneapolis, following presentations at the Whitney Museum of American Art, New York and the Museum of Contemporary Art, Los Angeles. Within Japan, the exhibition, Dan Graham by Dan Graham, was first presented at the Chiba City Museum of Art and subsequently travelled to the Kitakyushu Municipal Museum of Art, both in 2004.

The importance of the work of Dan Graham within the field of contemporary art may not be overstated. Graham’s wide-ranging practice first epitomized a conceptual approach and subsequently anticipated and presently actively participates within a post-conceptual and expanded art field. Engaging architecture, design, music, criticism and film, Graham’s multi-disciplinary practice serves to perpetuate experimentation and stands as an available model of resistance. Though executed with care and saturated with information, the seriousness of Graham’s work is ultimately undermined by an unrelenting sense of (fair) play and it is this openness - of which Graham remains a leading proponent - that has arguably defined the better art of the past 30 years. This sense of play is evident in the career-spanning body of work to be presented in the gallery exhibition which will include a newly commissioned architectural pavilion, a set of sculpture/models as well as a new and vintage series of color photographs.
www.takaishiigallery.com