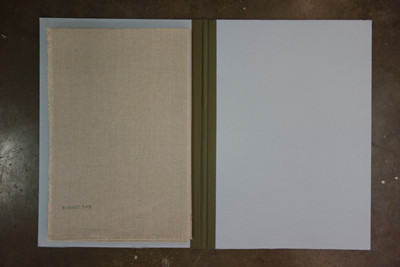 Mirra's present rhythm of working takes the form of a kind of paced printmaking, made through walking. The printmaking is not descriptive of the place, but instead the process is an extended chance procedure. The activities are interdependent; the walking structures the printing, and the printing impels the walking. This rhythm is nestled into a cycle of exhibitions that perpetuates the project. This procedure began in 2010 in Massachusetts, and then continued in Emilia Romagna Italy, Southern Sweden, the Taconic Range in the Northeastern US, the Arizonan Sonoran Desert, and Bretagne France. The gallery will present works from the Bretagne walks. From 9 October - 6 November Mirra will walk in Western Japan, producing works that will then be exhibited elsewhere. In addition to the prints, Mirra's walking in Bretagne was substantiated through a series of terse field notes made over the seven hour course of each day; these notes ultimately serving as text for typewritten 16mm cotton lines, each hour represented by a one meter long line.
www.takaishiigallery.com