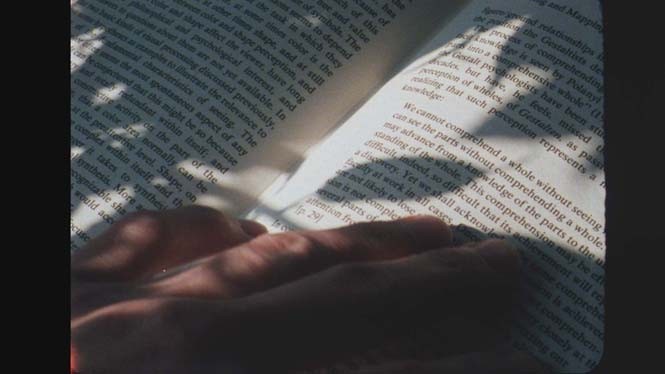 Taka Ishii Gallery is pleased to present “LEADER AS GUTTER,” a two-person exhibition by Luke Fowler and Toshiya Tsunoda. Fowler and Tsunoda regularly work together in the context of exhibitions, film projects and music publishing. This exhibition will comprise their newest film installation, “LEADER AS GUTTER.” This collaboration began remotely, with Fowler shooting a 16mm film based on Tsunoda’s desire to consider the pages of a book as a recording device. Fowler selected an ex-libris book called “On the Nature of Maps” because of its title and its physical qualities. He filmed the book in various sites while travelling in the U.S. and Italy, and finally at home in Scotland.
An installation was then conceived around the film as a complex system of visual, sonic and spatial experiences. The film is projected onto a stack of acrylic plates placed in the center of the gallery. When projected onto this material, the image becomes diffused or refracted as its beams of light enter and interact with the acrylic block. The “LEADER” in the title refers to blank film, technically known as black leader, that is used to add space between images during the editing process. “GUTTER” refers here to the printer’s term for the blank space between facing pages of a book.
Fowler and Tsunoda’s previous visual installation collaborations include “Composition For Flutter Screen,” Yokohama Trienniale (2008), which was later shown at The Serpentine Gallery, London (2009) and the British Art Show (2011); and “Ridges on the Horizontal Plane,” Bielefelder Kunstverein (2011), Galerie Gisela Capitain, Cologne (2011), Inverleith House Royal Botanic Garden, Edinburgh (2012), and currently on view at MoMA, New York as part of “Soundings: A Contemporary Score” (until November 3rd).
A sound echoes in the hollow cave, however, a light reflects and transparently scatters around the space. Can it be that this transparent layer of light is also a transparent layer of time?
We continuously think and perceive things in both time and space. Only a tiny collection of these space/time fragments are retained in our consciousness, to be experienced once again, in relation to a different layer of time.
Luke Fowler and Toshiya Tsunoda, July 25, 2013
Luke Fowler (Glasgow, 1978) is an artist, film-maker and musician based in Glasgow. He received his B.A. from Duncan of Jordanstone College of Art and Design (2000). Fowler creates cinematic montages of archival footage alongside new recordings, interviews, photography and sound. His work breaks down conventional approaches to biographical and documentary film-making. Fowler’s solo exhibitions include “Notes within Vibrations (Spatial Response to the ICA Archive),” ICA, London (2011) and “Warriors. Four Films by Luke Fowler,” X Initiative, New York (2009), as well as shows at The Serpentine Gallery, London (2009) and Kunsthalle Zürich (2008). He participated in the Yokohama Triennale (2008) with Toshiya Tsunoda. He is the recipient of the inaugural Derek Jarman Award (2008) and has been shortlisted for the Turner Prize (2012) for his solo exhibition at Inverleith House in Edinburgh, which showcased his film exploring the life and work of Scottish psychiatrist R.D. Laing.
Toshiya Tsunoda (Kanagawa, 1964) is a sound creator known for works of field recording and collage. He studied oil painting at Tokyo National University of Fine Arts and Music, where he received his MFA. Aside from his work as a sound creator, he is also known for his wide-ranging activities as an installation artist and performer. By using small or contact microphones to produce his field recordings, Tsunoda’s sound works capture the acoustic characteristics of spaces with dazzling clarity. These works show the ways in which particular vibrational phenomena shape the subjective experience of time and space. His exhibitions include “Soundings: A Contemporary Score” with Luke Fowler, MoMA, New York (2013), “Simple Interactions Sound Art from Japan,” Museet For Samtids Kunst, Denmark (2011), Yokohama Triennale with Luke Fowler, Yokohama (2008) and “Half Life,” Kilmartin Glen, Argyll, Scotland (2007). Tsunoda has also performed at Inverleith House, Edinburgh (2012) and Stuk Arts Centre, Leuven, Belgium (2010).
www.takaishiigallery.com