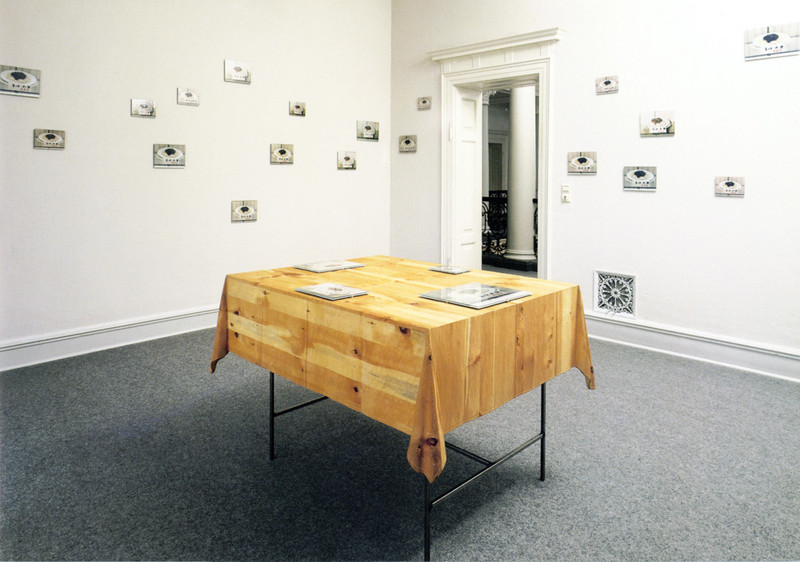 Taka Ishii Gallery is pleased to present a solo exhibition of works by Martin Kippenberger. This exhibition, made possible in collaboration with the Estate of Martin Kippenberger and Galerie Gisela Capitain, will be the artist’s first major solo exhibition in Japan. Kippenberger was one of the most influential artists to come out of postwar Germany and he played a pivotal role in establishing the postmodernism aesthetic between the late 1970s and 1990s. He was an artist, actor, dancer, heavy drinker, novelist, musician, and traveller. His unique and wild lifestyle was matched by his prolific and varied output, which spanned multiple media including paintings, sculptures, collages, posters, photographs, performances, installations, multiples, and books. The core of the current exhibition will be a large-scale installation, which was produced in the 1990s and comprises 38 multiples, six posters, one painting, and three hotel drawings. The exhibition promises to be a unique opportunity to see Kippenberger’s works, which have thus far not been adequately presented in Japan.

Kippenberger used bewilderment and confusion as a strategy to draw in his audience and frequently questioned the social function of art works. For example, in 1987, he purchased a Grey Painting from Gerhard Richter, which he proceeded to use as a table top for a coffee table, which he presented as his work “Model Interconti”. His aim, to effectively destroy the market value of Richter’s costly painting, shocked viewers. As the most reasonably priced contemporary art works on the market, multiples, which are also featured in this exhibition, were an important medium for Kippenberger, who publicly expressed scepticism for the art market by treating unique works and commercially produced multiples equally. His poster works were an apposite medium for expressing his humour, social critique, and provocative and suggestive images in clever combinations.

The painting in our show “Untitled (from the series Black Rubber Paintings)”, is part of an experimental series from 1991: The surfaces of the canvases were covered with latex and are reflecting an almost sculptural idea of painting. The work features iconic images from Kippenberger’s oeuvre such as the famous drunken street lamp, the symbol of the Lord Jim Loge also used for his subway entrances, a chair from the large scale installation “The Happy End of Franz Kafka’s ‘Amerika’”(1994) and the image of a fried egg with a thumb from the painting series “Fred the Frog” (1988). The black rubber painting, which can also be read as the artists own version of a black monochrome painting, perfectly depicts Kippenberger’s universe of ideas and his extremely wide-ranging reference system.

The multiples in the show offer many entry points into Kippenberger’s work and add different viewing possibilities, both on Kippenberger’s own work but also regarding his relationships to other artists and the art world in general: There are references to Günther Förg, Bruce Nauman, Susan Rothenberg, Barnett Newman and Robert Ryman or to concepts like Minimalism or political ideas of the time. They show his idiosyncratic way of working, his connectedness with the contemporary art world and colleagues, his sense of humour, his critique of society and hybris, comments on political attitudes, his mix of high and low culture, the idea of repetition in his work. In addition many works include references to himself as a person. There is a story to tell about every work and that story explains the work of the artist and his way of thinking.

During the entire show, which is in part a repetition of a historical show from the year 1990, Kippenberger decided that a Simply Red was the accompanying soundtrack for every visitor: the song “If you don’t know me by now” – greets each visitor, luring him into the space to look at the work and then hopefully, possibly, everybody will leave the show with a better understanding of the Kippenberger universe.

Martin Kippenberger (1953–1997) was born in Dortmund, West Germany. He enrolled at Hochschule für Bildende Kunst in Hamburg in 1972, but quit shortly afterwards to move to Florence to pursue a career in acting. In 1978, he moved to Berlin, where he established “Kippenberger’s Büro” [Kippenberger’s Office] with Gisela Capitain and became the proprietor of “S.0.36,” located in Kreuzberg and the most influential punk club in Berlin at the time. Around this time, he started a punk band called “Grugas” while organizing concerts and film festivals. In 1979, he organized the “Misery” exhibition, which included works by Werner Büttner, Achim Duchow, Walter Dahn and Georg Herold. Kippenberger quickly established himself as a central figure in the Berlin art scene. In 1983, he moved to Cologne, where he produced numerous avant-garde works in collaboration with Albert Oehlen. Kippenberger moved and traveled throughout his life, prolifically producing works in Paris, Vienna, Cologne, Seville, Madrid, Venice, and Los Angeles. In 1997, he died in Vienna at the young age of 44. Major solo exhibitions of Kippenberger’s works have been previously presented at the Hamburger Bahnhof – Museum für Gegenwart – Berlin (2013), Picasso Museum, Málaga (2011), Museum of Modern Art, New York (2009), Museum of Contemporary Art, Los Angeles (2008), Tate Modern, London (2006), K21 Kunstsammlung Nordrhein-Westfalen, Düsseldorf (2006), Museum Moderner Kunst Stiftung Ludwig Wien, Vienna (2003), Museum Boijmans van Beuningen, Rotterdam (2003), ZKM, Karlsruhe (2003), Kunsthalle Tübingen (2003), and Musée d’Art Moderne et Contemporain, Geneve (1997). He was also included in Documenta X (1997).