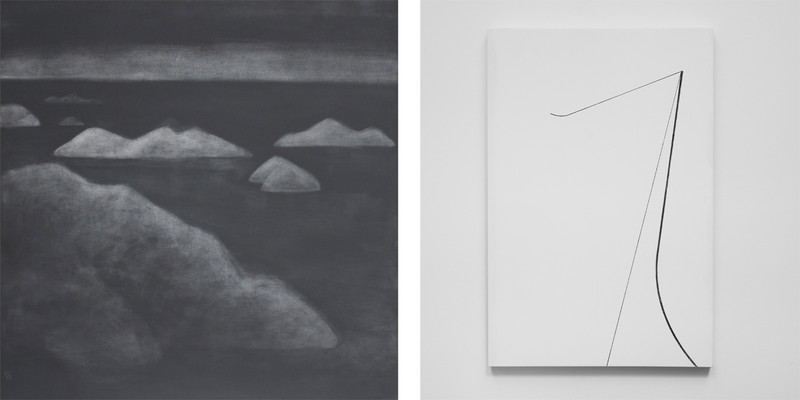 Taka Ishii Gallery is pleased to present an exhibition of works by Silke Otto-Knapp and Florian Pumhösl. The exhibition will feature paintings by Otto-Knapp, who is based in Los Angeles and Pumhösl, who is based in Vienna. Otto-Knapp and Pumhösl had a parallel solo exhibition at Galerie Daniel Buchholz, Cologne in 2008. They also exhibited together at the Arnold Schönberg Center in Vienna in the exhibition “art is: new art” in 2013. This is the first time they are collaborating on a two-person exhibition with new work formalizing their ongoing dialogue.

Otto-Knapp has previously produced paintings by exclusively using watercolors on canvas based on historical documentations of stage design, ballet and modern dance. In making her layered paintings, she worked with silver watercolor and gouache to create a space that achieves both flatness and depth. These paintings transformed the relationship of bodies and landscapes in space, and that of figure and ground, into virtually abstract elements. The current exhibition will feature paintings made in the summer of 2014 on Fogo Island, Newfoundland. While spending time there, Otto-Knapp became very interested in the concept of an island, a landmass surrounded by the sea, as a historical motif. Using black and grey watercolor pigments, the artist conflates frontal and aerial views of the island, allowing the pictorial space to remain unstable and the viewer to shift perspectives depending on their position in relation to the painting.

Florian Pumhösl produces paintings and films, which reference the graphics, typography, and architecture of the avant-garde movements. He is interested in the process of motifs shifting from one culture to another as well as one medium to another and the abstract visual language that this process produces. He explains, “Making a picture that appears abstract means to act in relation to visual languages associated with reproduction and instruction.” The current exhibition will feature a group of abstract paintings produced by stamping plaster panels with oil paints. This series refers to nautical routes used to travel between land masses, which circumscribe the entities we ordinarily identify as sea, island, land, continent, and nation. Pumhösl understands these maps as both describing a specific position and “Simultaneously not being routes, instructions, notations, or physiognomies. None of all these things, none at the same time.”

Silke Otto-Knapp (b. 1970, Osnabrück, Germany) majored in cultural studies at the University of Hildesheim and received her MFA from Chelsea College of Art and Design in London. She is currently based in Los Angeles. She has held solo exhibitions at Museo Marino Marini, Florence, Fogo Island Arts, Fogo, Canada, Kunsthalle Wien, Vienna, and Camden Art Center, London (2014); Kunsthal Charlottenborg, Copenhagen (2013); Kunstverein Munich (2010); and Tate Britain, London (2005). She has also participated in many group exhibitions, including “Sacré 101 – An Exhibition Based on the Rite of Spring,” Migros Museum, Zurich (2014); “Dance/Draw,” ICA, Boston, MA and “Watercolour,” Tate Britain, London (2011); and the 9th International Istanbul Biennial (2005).