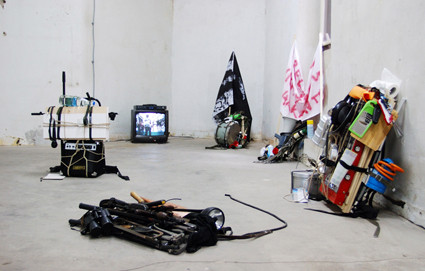 Nasan Tur works with images, performances, installations and interventions, in order to open up imaginary spaces in real situations. Whatever it is that you see, whatever is triggered by the image you perceive – it is never totally congruent with what is in front of your eyes: Actually, the topic of his work is the never-ending process of the transfer of inner images to the outside and vice versa. It is a process initiated by him as the artist, but within which every viewer is involved as an active partner. The locations chosen by Nasan Tur for his photos and actions can be described as urban or public; much more important is their quality as social realms or spaces, locations at which paths cross, where people temporarily group, whether it is a bar or an airport terminal, a road or an staircase, a mosque or an exhibition space. Nasan Tur (often personally) challenges the anonymous passage of these spaces by harmlessly offbeat behavior, or by drawing public attention to something which is normally either disguised, invisible or unheard. His emphasis is on the individual, the viewed as well as the viewers. And there is also an aspect of seeing within time, of the experience of the individual ́s own presence and not-ownable image, as if this image was pushed in front of the secret of its actual raison d ́être. In Nasan Tur ́s world of images, time can be experienced as a flow: of a story, a biography, many biographies, momentarily intersecting in public spaces, sharing its unity.
www.tanasberlin.de