Not easy to save the world in 90 days 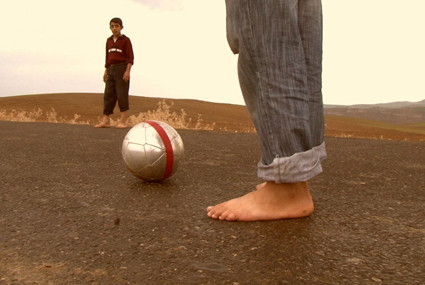 Turkish contemporary art is heading in a new direction. The steadily growing reputation of the International Istanbul Biennial, the regular presence of Turkish artists in important international exhibitions (documenta, Manifesta, biennials, the Carnegie International), the establishment of internationally-oriented private art museums in Turkey (Elgiz Museum of Contemporary Art, Istanbul Modern, SANTRALISTANBUL, Pera Museum, Sabanci Museum) and the dialogue between German and Turkish artists promoted through a variety of grants (DAAD, Transfer) have established a very positive profile here in Germany for the as yet little-known “art scene in Turkey”. Political developments, the still unresolved Cyprus question and the problematic discussions between the EU and Turkey on Turkey’s entrance into the European Union lend increasing topicality to the Turkish art scene.

Outside Istanbul, an interesting young art scene has formed around the art academies and educational institutes in cities such as Izmir, Ankara, Eskisehir and Diyarbakir. The conditions of artistic production are even more challenging there than in Istanbul. Nonetheless, in Diyarbakir, the most important metropolitan center for Kurds living in Turkey, a lively and exciting art scene fueled by multicultural diversity has developed in recent decades. A driving force behind that scene are the activities of Anadolu Kültür, the arts and cultural foundation founded in 2003 at the initiative of entrepreneur Osman Kavala. The foundation is committed to fostering cultural understanding between Kurds and Turks. It supports the Diyarbakir Sanat Merkezi (Diyarbakir Arts Center), cooperates with European cultural institutes and has formed a regional network with private cultural institutions in neighboring countries. The successful project work of this hub has facilitated a cultural transfer between the Anatolian countryside and the urban centers of western Turkey that is unprecedented in the history of the Republic. These activities have freed local culture from longstanding isolation and ushered in a new era, especially in the field of contemporary art. The new art scene is defined by some 40 Kurdish and Turkish artists who work predominantly with new media, mainly video and photography, and are either employed as public secondary school art teachers or still studying art education at Dicle University.

Not easy, to save the world in 90 days, the exhibition curated by René Block, examines the various levels of reflection engaged in by a young generation of Turkish artists. It shows artists whose central themes are the contradictory aspects of their own background and the circumstances of life in Turkey and in the diaspora. Questions of individual identity are intimately linked with politics, religion and gender roles, but also with statements on the globalized art system and its market mechanisms. These artists move between the parallel spheres of public and private life, between being observed and escaping notice, and develop their critical works in a charged arena between assimilation and autonomy. The participants represent three different groups, each highlighting different aspects of the emerging generation. Halil Altindere and Ali Kazma are among the group that lives and works in Istanbul. A second group consists of artists living abroad (Köken Ergun, Nasan Tur, Ahmet Ögüt, Servet Kocyigit). The third group lives in the city of Diyarbakir (Fikret Atay, Sener Özmen, Erkan Özgen, Cengiz Tekin). Most of the participating artists are chiefly of Kurdish descent. It is important to emphasize that the works on exhibit make pointedly direct and ironic reference to political subjects and pose a legitimate question about “cultural identity”. The artists in Not easy, to save the world in 90 days explore the complexities of their socialization, a blend of western European and Asian worldviews and life experiences. They approach the country with a degree of detachment and investigate the meaning of rootedness and being uprooted, of familiarity and foreignness.