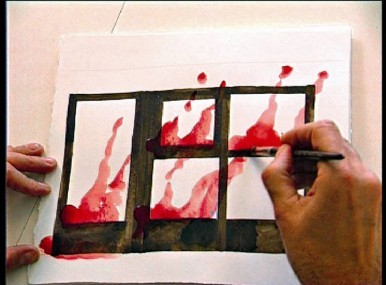 "It is possible that one day, people will forget Hiroshima, even Hiroshima". When Alfred Andersch sums up his essay on Alain Resnais` Hiroshima mon amour from 1959 with these words, he does not fail to articulate the responsibility that accrues to the artwork from this world-historical anamnesis: "The memory of the world consists of a few pictures, statues, sounds, poems, epic passages, in which suffering acquires form" (Alles Gedächtnis der Form (All the memory of the world), 1960, in: Die Blindheit des Kunstwerks und andere Aufsätze (The Blindness of the artwork and other Essays), Frankfurt am Main 1965, pp. 84-92, p. 92). The installation and sculptures, watercolors and films by the artist Sarkis, who was born in 1938 in Istanbul and has lived in Paris since 1964, illustrate this process precisely, for they bring the artist`s personal experiences into the most intimate relationship with the collective memory of humankind. His works generate a rich fund of visual impressions that Sarkis describes as "Kriegsschatz", cultural-historical spoils of war, but also - with a nod to the German art and cultural historian Aby Warburg (1866 - 1929) - as "Leidschatz", a storehouse of images where emotions from past and present are stored. Sarkis consequently understands his role as artist as that of a seismograph whose task it is to register the mnemonic waves of an emotionally turbulent world and keep them vividly alive in memory.
In his films from the years 1996 to 2010, a selection of which is now being presented for the first time in Germany at the art space TANAS, Sarkis allows the viewer to directly participate in a correlating process of transformation. Starting often from the materpieces of world art history, but also using images from a very private iconography that includes Sarkis`own studio, for instance, or his basic artistic notions of "Kriegsschatz - spoils of war" and "Leidschatz - treasures of suffering", the artist brings into focus the permanence and fleetingness of artistic forms of expression. The viewer, transfixed, can follow how a watercolor brush dipped in water attempts to render a given artwork or depicts vivid flames enveloping his studio, how the hand - the most important tool for gestural expression - undertakes every new experiments in form or is itself subject to artistic transformations. With his projections that span entire walls, Sarkis creates emotional experimental spaces imbued with a very intimate presence, whose colorful, formal and sonic-musical intensity bring forth closely observed sequences of experience that usually last just a few minutes. The fleetingness of the materials (watercolor, water, wax, sound) used in the filmed artistic activities and the fleetingness of the medium itself - these seem to be momentarily calmed in this way, and to yield a concentrate of memorial image-worlds laden with passion and pathos that pit themselves against the world-historical anamneses of a no less fleeting area.