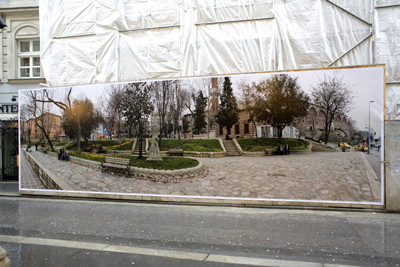 Tactics of Invisibility is a collaborative project developed by TANAS Berlin, Thyssen-Bornemisza Art Contemporary, Vienna, and ARTER, Istanbul. Conceived as a survey exhibition, the project presents fourteen positions from the contemporary artistic production of Turkey and its diaspora that deal with the concept of invisibility in different ways - as "being-under-the-surface", as the presence of absence, a tactic of withdrawal, refusal and resistance, of camouflage and disguise, as a symptom of disappearance, as a residue of the spectral and uncanny. Discourse around these artistic tactics emphasizes the potentialities of invisibility while also drawing attention to the implications of (voluntary or symptomatic) exclusion from the regime of the visible.
Tactics of Invisibility focuses on the potential of artistic practice to inhabit the liminal zones between the visible and the invisible and to call them into question through interference and disruption. In the process, it highlights the repressed and silenced, as well as inconspicuous phenomena that can be seen as symptomatic of pathologizing and "Otherness" but also understood as manifestations of marginalization or resistance. To invoke the unseen beneath the surface, or to produce it by means of camouflage and disguise, offers a strategy for intervening in processes of transformation and establishing new or imaginary linkages.

Tactics of Invisibility assembles a variety of artistic positions from three decades, enabling the exhibition also to pursue lines of connection and topical approaches to an aesthetic of invisibility. Works by pioneering figures such as Sarkis, Füsun Onur, and Ayşe Erkmen paved the way for the dynamic and sociopolitically engaged Turkish art of the 1990s, in which questions of multiculturalism, identity politics, migration, and minority politics came to the fore. While the works of İnci Eviner, Kutluğ Ataman, and Hale Tenger evince ties to the discourse of that period, their current work develops that discourse in very specific ways. Their projects query terms of "reality" by generating conceptual breaks or analytically dismantling and rearranging semantic structures, which links them to the artistic positions of the younger generation, as represented by Cevdet Erek, Esra Ersen, Nilbar Güreş, Nasan Tur, Nevin Aladağ, Ahmet Öğüt, xurban_collective, and the artists' initiative Hafriyat.