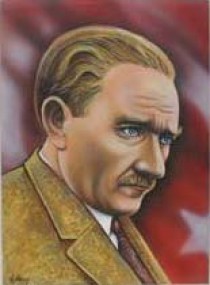 "In this project at Tanas I will be presenting a new series of installations, videos and paintings that explore the underlying patriarchal conditions of socio-political and cultural structures."

In ten different series of works made from 1983 to 2012, Vahap Avşar (born 1965 in Malatya, Turkey, lives and works in New York) uses various mediums and both historic and contemporary sources to generate provocative metaphors for our cultural condition today.

The main focus of this show comprises three different bodies of work questioning predominant and subtle mechanisms of authoritarian rule as illustrated in a collection of pop imagery that shaped Turkish society in the second half of the 20th century, only to disappear after 1999. These works attempt to reclaim this lost visual memory and restore it in order to complete the story of the last century so that, as Avşar puts it, we can move forward.

The collection in question is the archive of postcards and posters published by a printer called AND, which operated in Istanbul between 1969 and 1999 and was the most successful postcard/poster company of its time. Avşar has always referenced the archive in his works, and he was able to acquire it in 2010.

The first work from this series involves a single image, Ali, the Lion of Allah, 2011-2012. This work includes an oil painting, a replica of the poster of Ali the prophet. The image was the sole and holiest image that Alevis (Ali's believers) in Turkey displayed on their walls, often hidden or covered with fabric for fear of persecution. The painting was lost when the printing shop closed in 1999. Both poster and painting are currently unavailable anywhere else, they disappeared.

The second work is Originals, 2010-2012. This is a collection of about 100 small paintings produced by AND, which commissioned some of the best artists and illustrators of the time to paint subjects ranging from Ataturk to national heroes, religious themes, and the political propaganda of both state and clandestine political groups. Replicated as an array of postcards, these images dominated Turkey's visual landscape and were the main source material for Avşar's paintings when, as a teenager, he worked as a commercial painter, as well as for most of the images he painted in the 1980s. The selection of original paintings he brings to Tanas depicts national and political images from the 1970s to the 1990s.

The last work is a series of four posters the artist saved from one of his visits to the printing facility in 1993. The printer used to clean the press with these posters at the end of the day by running the misprints again and again until the press was clean. By sheer coincidence, some of these posters juxtaposed an image of Ali and the twelve Saints of Islam with an image of Jesus and the twelve Apostles based on Leonardo Da Vinci's Last Supper.

"In an installation of four upturned Untitled, busts, 2011-12, I address the same question of completing the story of the last century with a correction to the mythical past of contemporary art but with a twist where I include myself as well as the largely ignored Turkish artist Cengiz Çekil."