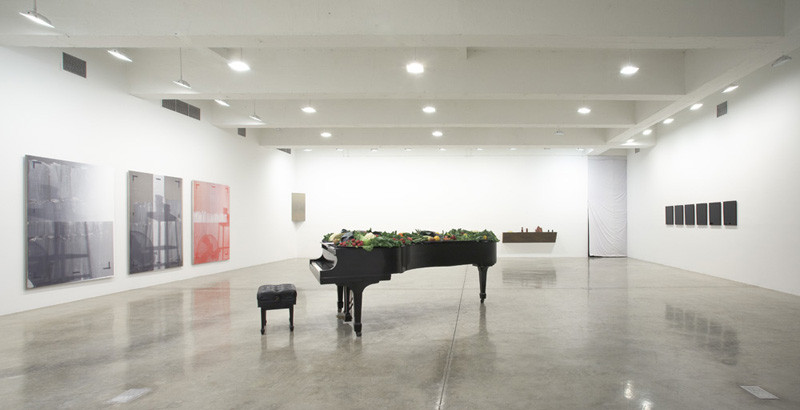 An origin story for ambient music is found in the liner notes for Brian Eno's 1975 Discreet Music, in which he tells the anecdote of happening on the idea when a recent accident left him bedridden. After a friend placed a recording of 18th-century harp music on the composer's turntable before departing the room, he realized the stereo amplifier was at such a low level that the music (which was also playing only through a single channel) was nearly inaudible, blending with the "color of the light" and "sound of the rain," and residing at or just beneath the threshold of perception.

The exhibition ambient puts forward the genre speculatively, as a potential prism through which to reconsider artistic composition some forty years later. Or better, as a lens through which to consider anew art's reception, particularly in light of the uncertain position of viewing subjects as artistic production steeped in an industrial era--with steady relationships drawn between audience member and any object he or she encounters and beholds, often steeped in intervention or critique--gives way more fully to that of a postindustrial paradigm. If ambient music emerged decades ago as an artistic mode revolving around dislocations and relaxations of authorship--and quasi-reversals of figure and landscape, foreground and background--perhaps this proposition may usefully be expanded today, in a manner pertaining not only to objects of art but contemporary ways of looking (and their tenuousness between artistic periods).

Certainly, the operational diagram for tape loops accompanying those liner notes for Discreet Music seem especially evocative, for example, of Olafur Eliasson's principle of "seeing oneself seeing," with one's encounters with space necessarily changing and recycled through time. The permeable phenomenological line between projection and reception also underpins Liz Deschenes's sculptural photograms, which at once suggest the delineation and recording of space, and Sherrie Levine's Black Mirrors, whose empty, minimal forms obtain physical presence. Finally, if the sonic abstractions of ambient compositions were intimately related to the textural innovations of popular music, so the drawings of Susan Goldman and sculptures of both Haim Steinbach and Dike Blair are steeped in the modulations of mass-cultural objects and images.

For one week of the exhibition, Tanya Bonakdar Gallery will feature an installation of Walter Marchetti's Natura Morta, whose composition will be performed daily by Alex Waterman. (The latter artist's sculpture, entitled Still life for Walter, features the same composition as heard in a recording played in his London apartment.) There will be similar comings and goings among artists as the exhibition unfolds for its duration, indicated by a TK both on the checklist and in the space.

Tim Griffin is the executive director and chief curator of The Kitchen.
www.tanyabonakdargallery.com