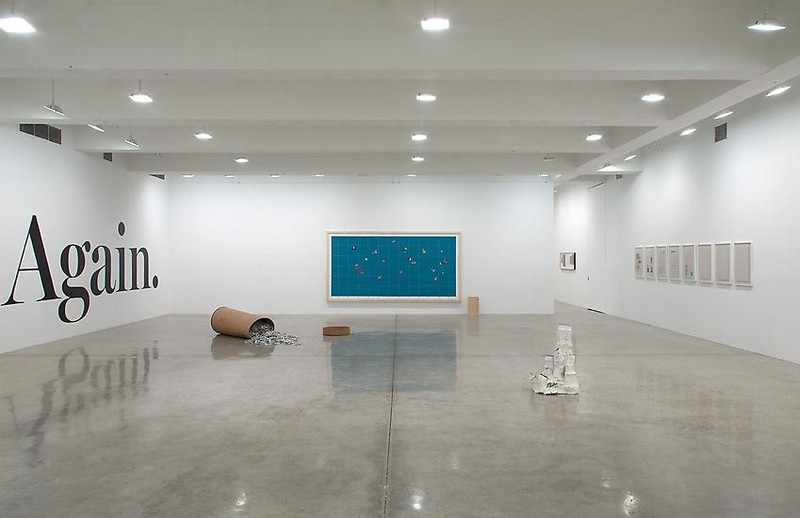 Tanya Bonakdar Gallery is very pleased to present between the lines, a group exhibition of language and text-based works by gallery artists. Exploring the complexity of language and its manifestations in and as art, this presentation will bring together over twenty sculptures, installations, paintings, photographs, videos and works on paper that include elements of text and speech. Dissected, recombined and transformed into patterns, shapes, objects and expressions, language in this exhibition resists immediate readings, becoming instead a pliable medium and point of departure for different practices and narratives.

Furthering an investigation that dates back to early modernism, the works on view incorporate text and the spoken word in new ways. Like their predecessors, this group of artists pushes language beyond the constraints of grammar, logic and communication and reconfigures it as both a fluid material and conceptual device. At times, text and speech are used as ways to engage with popular culture, politics and social ideologies; at others, they are abstracted both visually and verbally to explore semiotics and the structure of language. More fundamentally, the words, phrases and notations that appear in these works probe the nature of communication itself, revealing its effectiveness as well as its limitations.

between the lines considers the evolving relationship between language and art across a wide range of practices and media. Many works explore the physical and cognitive properties of sight – the shift between looking and reading – through a series of visual and verbal puzzles made up of shapes, patterns, alphabets and even elements of an eye test. Questioning not merely what we see but how we see and understand it, these works also address assigned meanings and modes of interpretation as they apply specifically to the written or printed word.

Other works exploit the relationship between context and meaning by repurposing found text and speech as poetic statements, personal expressions or as part of elaborate assemblages. Extracted from familiar sources such as literature, logos and periodicals, these symbols and phrases inspire new readings as formal elements, at times pared down to their most elemental forms. Similarly, some artists explore the material qualities of language by physicalizing text through repetition or displaying it as an object. Merging form and content, these works – like all in the show – both acknowledge and complicate the accessibility of language, derailing traditional readings while at the same time encouraging new ones.
www.tanyabonakdargallery.com