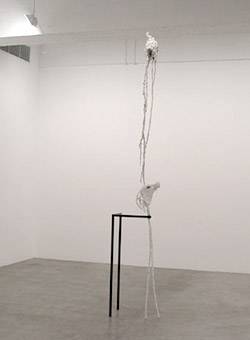 Tanya Bonakdar Gallery is pleased to announce knowirds, the gallery’s seventh solo exhibition with Charles Long. The surprisingly elegant, attenuated droppings of blue herons and white egrets splattered along the concrete slopes of the Los Angeles River are the focus of this exhibition of freestanding sculptures and albumen photography.

Inspired by the odd, creature-like qualities of the bright white excrement, Long created a series of photographs printed with albumen, a technique invented in 1850 in which images are suspended in an emulsion derived from eggs. In these umber-toned portraits, the spectral forms of the heron droppings appear as petroglyphs inscribed along the edges of the trash-strewn river. Where multiple droppings have collected, possible narratives emerge. In other images, fluid chimera float between cascades of leaves and debris and settle on the hieroglyphics of faded graffiti from the local “frogtown” gangs.

The sculptures differ from the photographs by revealing the true scale of these stains, while also bringing what was an anthropomorphized projection into the world of three dimensions. Slender fragility is counterbalanced by an imposing scale and base materiality. Forms composed of paper mache, plaster, river sediment, sticks, plastic bags, broken glass, feathers, candy wrappers, cigarette butts, car parts, and other detritus scavenged from the river can reach as high as twelve feet.

As in his earliest sculptural preoccupations with popcorn kernels and other found objects, Long perceives these abstract shapes as singular and distinct from the landscape, continuing his investigation of the freestanding modernist approach to sculpture. Isolated and autonomous, their peculiar specificity seems to speak. Yet their authorship is merely the meeting of a resilient heron’s digestive system and a city’s attempt to contain a wild body of waste and water with concrete. The particular incline of the banks of this enormous concrete drainage plays an essential role in the shaping of the forms as they flow to completion.

Typical of Long’s work, formless spontaneity coexists with contained structure as these tenuous forms depend on efficient servicing supports. In this case, the “bases” are partial box-like frames composed of thin steel bars. Yet the sculptures do not appear fully grounded; often they seem to defy gravity.

The title knowirds suggests a fusion of knowing, birds, innards, and inwards. Yet it is also a “word” that paradoxically sounds like “no words.” While the materials, images, and forms comprising this body of work awaken the sense of nonexistence, they also come directly out of the artist’s daily experience at his studio on the river. Through his immediate contact with the ever-changing forces of what is found in plain sight but ignored by an entire city, the artist finds an urgent sense of aliveness at play amidst the degraded sublime.

For further information please contact Claire Pauley at Claire@tanyabonakdargallery.com or 212-414-4144.