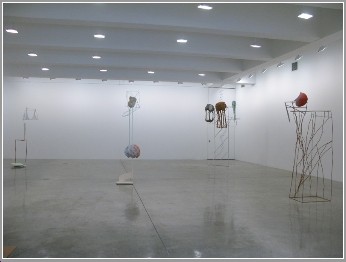 Tanya Bonakdar is pleased to announce a new body of work from the sculptor Charles Long, in his eighth solo show with the gallery. A distinct break from the most recent work based on bird excrement and the Los Angeles River, Long’s new sculptures are spare, colorful, non-referential structures, assuredly ungrounded, offering a balance of imbalances. In contrast to the previous work addressing resilience and decay, this body of work forges an entirely new emotional and spiritual territory, which involves both a paring down to essentials and an openness to unmediated experience.
In each of the sculptures, standing between six and ten feet tall, distinct abstract forms hover in unfamiliar configurations, posing questions of intention and challenging the desire for immediate comprehension. These disparate elements are brought together in a harmonious discontinuity, and presented not as a collection of objects, but as a redefinition of objectness. Substantial in scale yet airy and light, the sculptures are decentralized, with uncertain means of suspension and structure.
The sparse and economical quality of the work is counterbalanced by the unpredictable color, which functions as a substantial compositional element. Long’s palette is emotionally difficult to place, neither harmonious nor garish. The color appears clearly delineated at first, but as the viewer circles the work, subtle shifts emerge, dematerializing the form.
Long’s work has often drawn inspiration from sculptors such as Noguchi, Giacometti, and Hesse; here he continues his investigation of modernist content with work recalling Sir Anthony Caro and Tim Scott. However, rather than sitting comfortably within modernism’s parameters, Long consistently confronts these limitations as obstacles to push beyond, seeing modernism’s trajectory as unfinished and full of possibility. In these works, the static nature of the object is confronted, as the peculiar arrangements suggest a kinetic movement about to take place. Their compositions have a palpable sense of order, but the internal logic is not revealed, as if one is hearing a foreign language one doesn’t know.
Simultaneously complex and clean, this work offers a paring down and reconfiguration of essentials, with significant breathing room to stimulate reflection. These quietly arresting sculptures are both unsettling and refreshing. They exhibit a peculiar optimism, anticipating an unknown future with a sense of curiosity and adventure.
Long participated in last year’s Whitney Biennial, and his contribution was a critically acclaimed highlight of the exhibition. In addition to the Whitney, Charles was featured in an invitational at the American Academy of Arts and Letters, New York and received their Award of Merit Medal for Sculpture. Other recent shows include The Uncertainty of Objects and Ideas: Contemporary Sculpture, Hirshhorn Museum and Sculpture Garden, Washington D.C., 2006 (group); 100 Pounds of Clay, Orange County Museum of Art, Newport Beach, California, 2006 (solo); Gone Formalism, Institute of Contemporary Art, Philadelphia, 2006 (group); and More Like a Dream Than a Scheme, David Winton Bell Gallery, Brown University, Providence, RI, traveling to SITE Santa Fe 2005 (solo).
www.tanyabonakdargallery.com