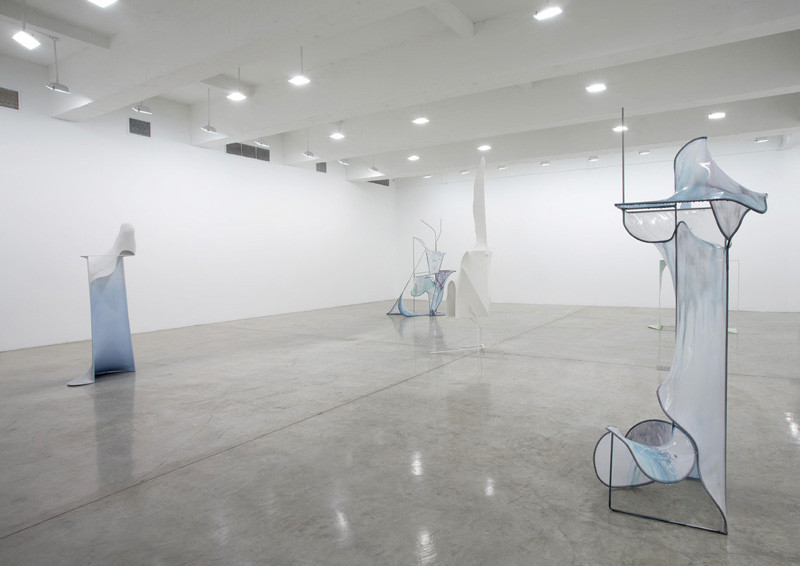 Tanya Bonakdar Gallery is pleased to present the ninth solo exhibition of new sculpture by Charles Long. In this inventive body of work, Long shares with the viewer his search for rich experiences that are unique to abstract sculpture. Through the exploration of new processes and materials, Long endeavors to arrive at spatially and visually engaging works that aim to offer the viewer an open experience by eschewing external reference. These lively and poetic forms continue the formal language Long has been building for decades.

The origin of any one of Long's sculptures might be traced back to some aimless doodle within the evolutionary soup of sketches that pile up in the studio. As the artist alternates from pencil and paper to torch and steel rods, these fledgling apparitions prompt the growth of a three-dimensional steel skeleton. Long then considers the many potential surfaces that could evolve within the artwork's unique scaffolding. Using a resin made from soy and peanuts, he then materializes a form from the numerous potential surfaces that wait unseen within the various perimeters of the steel framework.

The resulting curving forms follow a mathematical principle known as "minimal surfaces," according to which a given plane assumes a geometrical configuration of least possible area into which it can readily deform according to a given framework. The use of soy-peanut epoxy to freeze these flowing forms is an important new step in the artist's practice, as this natural material allows Long to return to his biomorphic forms. In some, the raw translucent resin is stained with colors that flow across the organic form, creating atmospheric drips and haze. In others, color and textures shift across the opaque resin surfaces, defining the volumes enclosed by these minimal surfaces.

Long finds inspiration in the writings of Ralph Waldo Emerson, and thus seeks a creative investigation that is open-ended, independent of pre-determined objectives, and, as Emerson himself describes it, a "voyage in the unharbored deep." In one piece, Long has included sketches culled from the rich collection of drawings in which he typically immerses himself while in the studio. Presented within the cavity of the sculpture, Long suggests that the three-dimensional forms on view convey but a few of the many possible manifestations along a continuous arc of the artist's inner exploration.

Charles Long's work was recently exhibited at the UCLA Hammer Museum, Los Angeles as part of a solo presentation entitled Seeing Green, in conjunction with the exhibition All of This and Nothing: 6th Hammer Invitational. Other recent shows include The Uncertainty of Objects and Ideas: Contemporary Sculpture, at the Hirshhorn Museum and Sculpture Garden, Washington, DC (group 2006); 100 Pounds of Clay, Orange County Museum of Art, Newport Beach, CA (solo 2006); Gone Formalism, Institute of Contemporary Art, Philadelphia, (group 2006); and More Like a Dream Than a Scheme, David Winton Bell Gallery, Brown University, Providence, RI, traveled to SITE Santa Fe (solo 2005). In addition to being featured in the Whitney Biennial, Long has received the American Academy of Arts and Letters "Award of Merit Medal for Sculpture."
www.tanyabonakdargallery.com