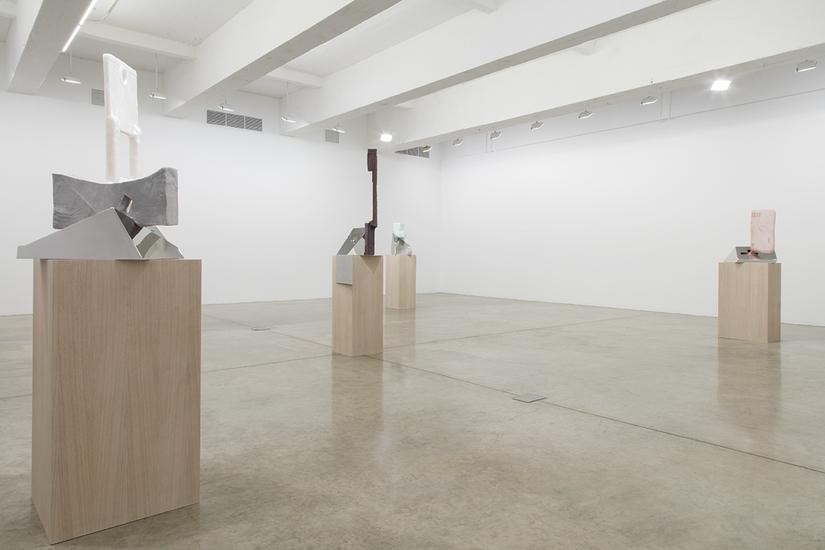 Tanya Bonakdar Gallery is pleased to announce b 4 u, an exhibition of new sculptures by Charles Long. On view January 5 through February 4, 2017, b 4 u marks his eleventh exhibition with the gallery. Executed in platinum silicone rubber and mirror-polished stainless steel, these six pedestal works connect the history of figurative and abstract sculpture with the peculiarities of what we imagine the body might be given the rapid proliferation of new realms into which its image, and our selves, may drift.

Those familiar with Long’s career have witnessed his wholesale invention of new bodies of work with each exhibition. b 4 u is stylistically distinctive from previous work, yet also tightly focuses on the core of his preoccupations: the body vs. abstraction; specificity vs. amorphousness; autonomy vs. wholeness. These conundrums are the abstract models Long finds essential to the very nature of making and experiencing the medium of sculpture. Here the artist puts these concepts into play before the viewer enabling a mutual and unique encounter.

Each sculpture in b 4 u is divided into two distinct parts: support (base) and supported (sculpture). Cast in platinum silicone rubber and pigmented in shades ranging from marble-like periwinkle to lifelike flesh tones, the ‘sculptures’ are perched upon geometric ‘bases’ whose entire surfaces reflect their surroundings. These stainless steel supports reflect the silicone sculpture while capturing the viewer’s own body, revealing a flash of elbow or cheek, perhaps glimpses of another viewer, or other sculptures nearby.

The silicone elements share a similar abstract language with the bases but are formed with a softer geometry. Upon closer inspection, these volumes are all detailed with fine textures and features derived from the skin of the human body. The negotiation between geometric volume and the human image is played out in the mirrored surfaces as well as the sculpted rubber, tapping into an experience of the uncanny and its close relationship to abstraction, perhaps recalling something of our pre-lingual experience of the body.

Long remarks that, "b 4 u is for and about the viewer. Originally I imagined this experiment as some kind of ‘exposure therapy’ through a hyper-recursive looping of the body. In any case, I hoped to remove much of the escape routes toward topicalities and rationality in favor of delivering a new sculptural experience, one that bares the peculiarities of being a thing at this moment in time.”

Throughout the past two decades, Long’s work has been the subject of major exhibitions worldwide. His recent important solo presentations include CATALIN at The Contemporary Austin in Texas (2014), Fountainhead, a public commission in Dallas, Texas organized by the Nasher Sculpture Center (2013), Pet Sounds at Madison Square Park in New York City (2012), Seeing Green, a solo project in conjunction with All of this and nothing: The 6th Hammer Invitational at the UCLA Hammer Museum in Los Angeles (2011), 100 Pounds of Clay at Orange County Museum of Art in California (2010), and More Like a Dream Than a Scheme at David Winton Bell Gallery at Brown University in Rhode Island, which traveled to SITE Santa Fe in New Mexico (2005). His work was featured twice in the Whitney Biennial at the Whitney Museum of American Art in New York (1997, 2008). Charles Long lives and works in Southern California.
www.tanyabonakdargallery.com