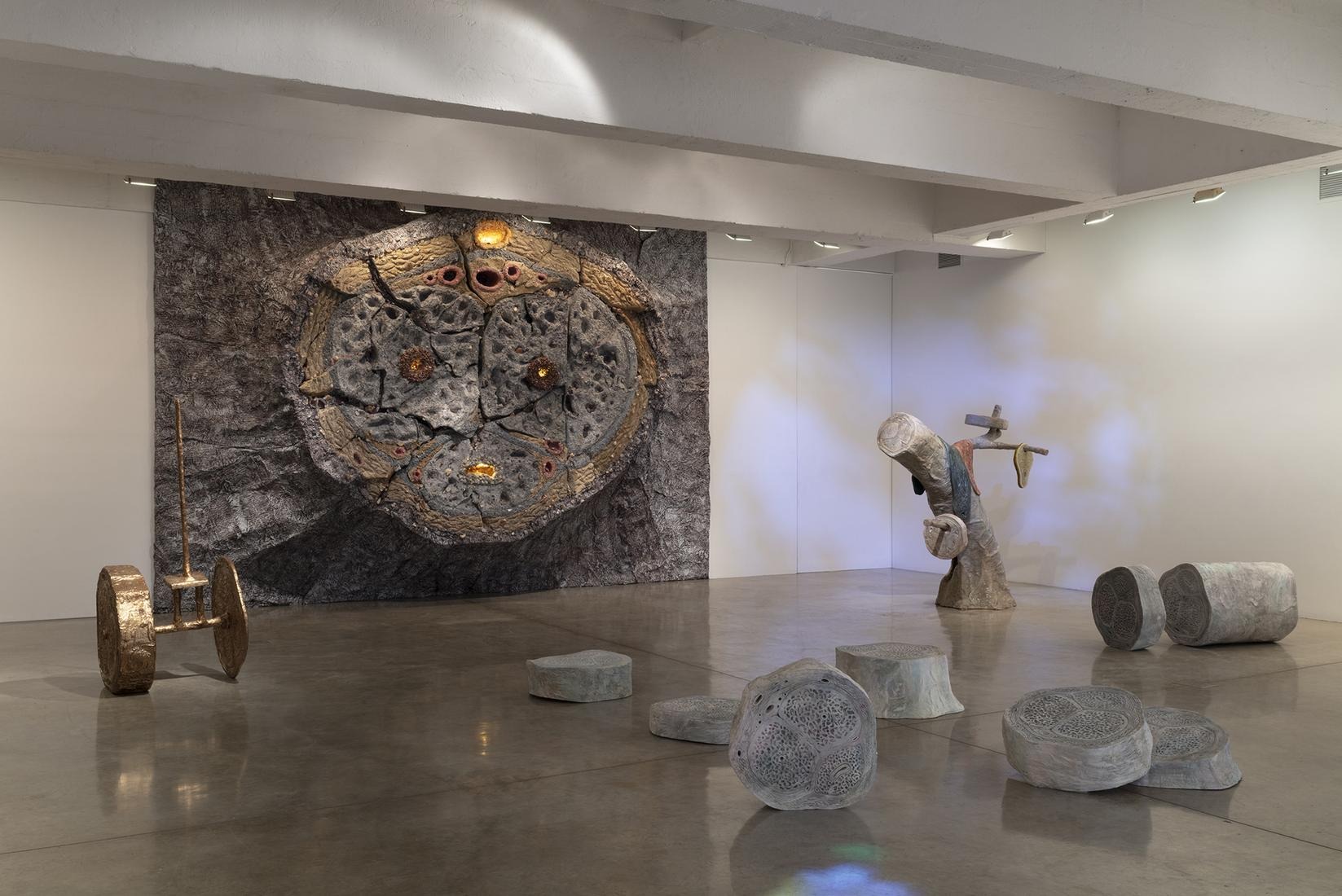 Tanya Bonakdar Gallery, New York, is delighted to present paradigm lost, an immersive installation by Charles Long. On view in the downstairs gallery from January 5 - February 9, 2019, the exhibition brings together a body of work that the artist created over the last year. For the artist’s thirteenth solo exhibition with the gallery, paradigm lost continues the artist’s investigation of the forms scattered on the shore of modernism’s receding wave. Long’s studio output of the last 3 decades reveals both a charting of this modernist trajectory and need to transcend its shortcomings. With references to Giacometti, Guston, Munch, Brancusi, and other patriarchs who haunt the artist’s studio, paradigm lost castrates these forbearers in a poetic socio-political examination of our present moment, to nuanced and playful ends.

The inspiration for this body of work developed during the artist’s daily walks through the deteriorating landscape of tree trunks around the village on Mt Baldy, California, where he has resided for over a decade. As the climate changes and the trees die, the village proliferates with stumps and stacks of massive logs. For the artist, the symbolic weight of this landscape poetically resonates with the change of social climate around the increasingly apparent consequences of patriarchy.

Examining his role in these effects he took into account his identity not only as a socially gendered being but also his identity defined by his physiology, in particular the confines of his anatomical and chemical self. One day, while drawing a tree stump, Long replaced the concentric rings with the cross-section of the human penis. From this, a third image appeared; Long explains, “The anatomical cross section oddly resembled a face or ancient mask that looked back at me with an expression of confusion or sorrow, but ultimately, a question – one that reverberated with my own queries about my relation to the gender I perform and embody within patriarchal culture. The new works then spilled out from this tear in the fabric of my being in myriad images and forms of this open body, creating a mythological world, all of it bound by the sole motif derived from the anatomical cross section of human male anatomy.”

paradigm lost offers a place for contemplation amidst the aftermath of a patriarchal apocalypse. The historical and visceral touchstones present in this fossilized environment serve as reminders of the path that led to this imagined extinction, while also presenting a sardonic critique, and a touch of comedic relief at the bedside of this cultural demise. With its sights also fixed on a future, paradigm lost sets the stage for an unscripted performance. And after the viewer takes stock of the epic tragedy that has transpired, she commences playing out a new paradigm.

Born in 1958 in Long Branch, New Jersey, Long currently lives and works in Mt Baldy, California. In 1981, he received a BFA from Philadelphia College of Art while also participating in the Whitney Museum’s Independent Study Program, and later earned an MFA from Yale University in 1988. He currently teaches as a professor in the Art Department at the University of California, Riverside.

Throughout the past two decades, Long’s work has been the subject of major exhibitions worldwide. The artist was featured in Made in L.A. 2018, curated by Anne Ellegood and Erin Christovale at the Hammer Museum, Los Angeles. Long’s significant solo presentations include CATALIN at The Contemporary Austin (2014), Fountainhead, a public commission in Dallas, organized by the Nasher Sculpture Center (2013), a survey exhibition at Jarla Partilager in Berlin (2013), Pet Sounds at Madison Square Park in New York City (2012), 100 Pounds of Clay at Orange County Museum of Art in Santa Ana (2010), and More Like a Dream Than a Scheme at David Winton Bell Gallery at Brown University in Providence, which traveled to SITE Santa Fe (2005).