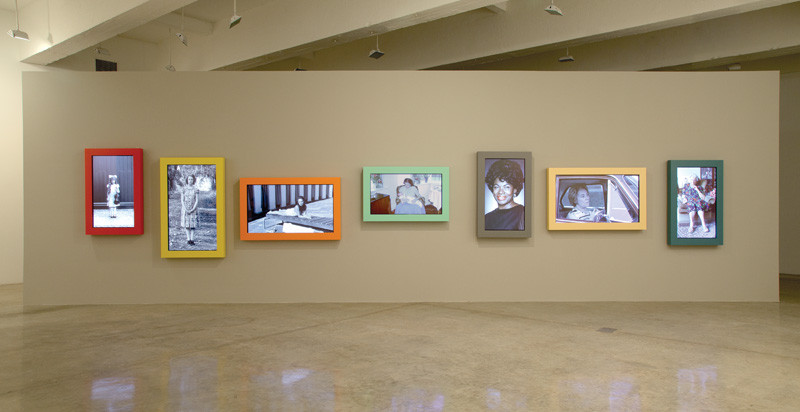 Tanya Bonakdar Gallery is pleased to present a major solo exhibition of new work by Gillian Wearing. In a wide ranging vocabulary, Wearing presents an epic survey of activity since her last major solo exhibition in New York in 2003. Featuring new and recent video installations, photographic series and sculptural work, the exhibition will occupy both floors and all four public gallery spaces. Continuing the artist's renowned and influential exploration of identity, performance and storytelling, Wearing describes narratives that land strikingly between the public and private, fiction and documentary, the raw improvisation and the carefully staged. Projecting these issues through a lens of personal memory, cultural history and the media, a unique and compelling psychological resonance persists throughout.

In the main gallery space on the ground floor, Snapshot is a monumental seven-channel video installation that pays homage to the evolution of still photography through the implementation of moving images. Tracing the evolution of still portraiture throughout the passage of time, an explicit timeline of sorts is presented, informed by old photographs but evoked through moving imagery. Seven different women at various stages of life, from youth to old age, are depicted on seven monitors corresponding to eras in the 20th century, as an anonymous narrator describes memories that are at once personal and universal.

This exploration of feminine identity is counterbalanced by the exhibition in the second ground floor gallery, featuring Wearing's latest video work, Bully. A large projection presented in a black box space, Bully stems from the artist's highly acclaimed feature length film Self Made, 2010, and confronts the viewer with an individual's catharsis. In a revelatory moment, we follow the construction of a fiction as it transcends one character's personal story to become a reality for all participants. The work also eloquently illustrates how Wearing's recent engagement with directing expresses itself through her art.

In the first upstairs gallery, Wearing presents another major video installation, Secrets and Lies. Within the confines of a small chamber, not unlike a confessional box, one is met by one masked figure after another recounting an intimately kept personal secret. The participants, gleaned from announcements placed online, answered a call to "Confess All On Video." The disguised features of the participants combine with a brutally open honesty, challenging one to question notions of self and the very basics of portraiture. The mask both protects the identity of the confessor as well as empower them to be able to speak the truth.

In the main upstairs gallery, Wearing exhibits three major photographic works, each a self-portrait of the artist posed as figures from recent art history: Diane Arbus, Robert Mapplethorpe, and Andy Warhol. Each of these mythologized artists' practice profoundly influences Wearing's own, and for each composition, the artist dons costume and prosthetics to occupy her subjects' place. In the same room, as if in reverence to these three iconic personas, People, 2011 is Gillian Wearing's most recent photograph. Inspired by Dutch still life paintings of the 17th century, the piece depicts an elegant and complex arrangement of silk flowers in a small vase. One can only imagine the explosion of color, otherwise more intense and unreal due to the artificial coloration of the faux flowers. These flowers will never wilt or die, and while the piece references the past, the artificiality of its construction is not disguised and cannot be ignored.

Finally, two small bronze figures, Gervais, 2010 and Terri, 2011, are the first of a new body of work that Wearing refers to as "social sculpture." Depicting life-like renderings of apparently everyday people, plaques below the sculptures describe the heroic role each has held within the broader context of their society. Of particular significance for this exhibition in New York, Wearing approached NYPD officer Terri Tobin, a hero of the 9/11 disaster, to model for the depiction of "Heroine." Ten years later, through the simple bronze figure, Wearing discreetly resounds the monumental in the everyday man and woman.

Recipient of Britain's most prestigious Turner Prize, Gillian Wearing is internationally regarded as one of the most influential artists of her generation. In the past year, Wearing's work has been exhibited in the context of numerous influential museum exhibitions in New York and throughout the country, including The Talent Show at MoMA PS1, New York, which originated at the Walker Art Center in Minneapolis. Her work was included in the recent exhibition Haunted, at the Guggenheim Museum, New York, and was also part of The Original Copy: Photography of Sculpture at The Museum of Modern Art, New York. This year, Wearing's new feature-length video Self Made was chosen to open MoMA's program Documentary Fortnight 2011: MoMA's International Festival of Non-Fiction Film and Media. In May, the work is also slated to open the series Artists' Cinema at the Walker Art Center.

In addition to these prestigious exhibitions in the United States, next year the Whitechapel Gallery in London is planning an extensive exhibition of Wearing's work, that will continue to K20, Kunstsammlung Nordrhein-Westfalen in Dьsselfdorf, Germany, and a new monograph will be published to accompany the shows.
www.tanyabonakdargallery.com