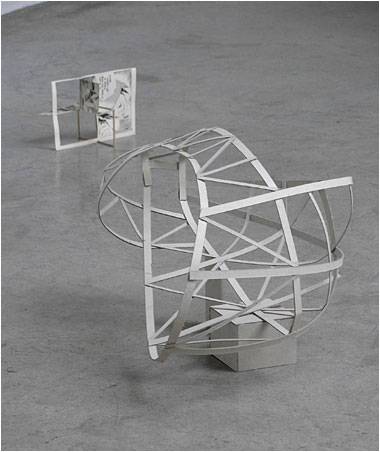 Tanya Bonakdar Gallery is pleased to present Satellites, a show that brings together a group of young artists living and working in the UK whose practices demonstrate similarly implied and ongoing relationships with a diverse array of individual references. The exhibition is conceived around an idea of constellations in artistic production - configurations of thoughts, objects, words, images, and references from which, when brought together, a picture begins to emerge. Crucial to such understanding is Walter Benjamin’s notion of constellations: configurations made of apparently unconnected and scattered unities drawn together by the power of thought and intuition. Famously developed in his Arcades Project, such a dynamic notion favors a fragile three-dimensional map of evocative correspondences to the linearity of historical narrative. As in constellations, the works in the exhibition suggest rather than impose the connections between the disparate elements, whose relationships are hinted at rather than clearly defined.

The proximity between the fragments is articulated through delicate systems of resonances and associations. Once the fragments, quotations, images or thoughts are gathered together a figure or shape appears in the mind, connecting what was before only a portion of sky. Rather than having a single medium or a theme in common, the works in the exhibition share a similar structural interest, a process consisting of a particular associative strategy. All the works assume the shape of conceptual or atmospheric collages, sometimes expanding into a sculptural field, sometimes producing an exhibition within the exhibition.

Ryan Gander’s work neatly illustrates this tendency, evidenced by the associative nature of his practice both within individual works and in the group gathered here. Simon Popper’s series have been developed following a precise web of quotations, in this case from Alighiero Boetti, John Cage, James Joyce and Samuel Beckett. The crux of Ian Kiaer’s practice resides between the construction of an elegantly composed sculptural essay and a set for evoking cultural moments and characters. Both in the work of Sue Tompkins and in the micro-group exhibition sub-curated by i-cabin the fragments collected obey an internal logic or an almost obsessive set of rules. In the case of Tompkins’ work, we are presented with visual traces of spoken performance, as language becomes form and layers are precisely built up, interrupted and stripped away. With i-cabin, their practice as a whole describes an expansion of the notion of the constellation into the possibilities for artist curated exhibitions, and here the resonances point to i-cabin’s extensive network of collaborators.

Following the structure of combinatory compositions, Satellites aims to produce a temporary constellation that will allow the works to speak to each other in an unpredictable and subtle way, thereby attempting to create a constellation of constellations. The title for the exhibition reflects both the definition of a natural satellite as one celestial body that revolves around another, held in their respective orbits and in relation to one another by an invisible gravitational force, as well as the definition of the man-made satellite, used most often in the transmission of complex information from one distant region to another.

For further information and images please contact Claire Pauley on 212 414 4144 or at: claire@tanyabonakdargallery.com