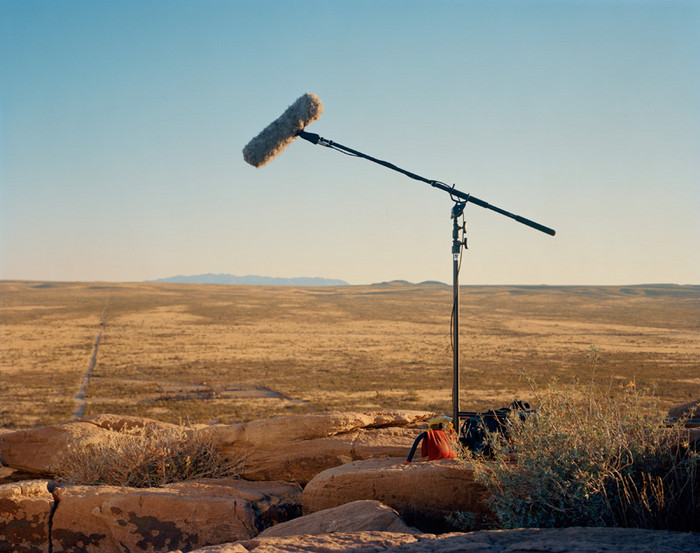 Tanya Bonakdar Gallery is pleased to present Teresa Hubbard/Alexander Birchler's fourth solo exhibition at the gallery, featuring the premiere of a new video installation entitled Méliès. The work explores the residue of cinema and social terrain around the site of a mountain in the Chihuahua Desert in West Texas named Movie Mountain. According to local residents, this mountain near the border town of Sierra Blanca is named Movie Mountain because a silent film was shot there in the early 1900s. Searching for the origin of the mountain's name, the artists embarked on a journey traversing the landscape of early silent-era film production. Through their investigations, Hubbard/Birchler uncovered a peculiar possible relationship between Movie Mountain and Gaston Méliès, the lesser known brother and business partner of the famous filmmaker George Méliès. In April 1911, Gaston Méliès relocated his struggling movie company from San Antonio, Texas to California. He departed with his film crew and actors aboard the Sunset Express Train, taking a route that stopped in Sierra Blanca, which at that time was the railroad's pivotal gateway junction to the West Coast. The artists' research suggests that during this voyage, Méliès and his company interrupted their travel and got off the train to film a movie.

Filmed on location over the course of one year, the video installation Méliès generates several fractured narrative strands that interweave agency and memory. Following a group of horseback riders to Movie Mountain, the project features local residents whose relatives performed in the silent picture, as well as a script-writing cowboy. Méliès is presented as a two-screen projection in which the staggered, detached screens transport a reflection of the fractured, layered history of Movie Mountain. Also included in the exhibition are new photographic works, Dead Cat on Movie Mountain, Sunrise and Dead Cat on Movie Mountain, Sunset. These images juxtapose light and time conditions at the top of the mountain as the sun strikes the long fuzzy head of a shotgun microphone, known as a "dead cat" in filmmaking.

Also on view is Hubbard/Birchler's feature length video Grand Paris Texas, which explores the physical and social space of a dead cinema named "the Grand." This long-abandoned movie theater, populated by generations of pigeons and littered with debris, is a place where time both stands still and simultaneously advances. The location prompted the artists to explore Paris, Texas as a meta-location constructed through celluloid and soundtrack, made famous by Wim Wenders' 1984 film Paris, Texas, a movie that was not actually shot in Paris, Texas. With the decaying Grand theater as a central character, the artists connect three seminal movies of the southwest: Wim Wenders' Paris, Texas (1984), Bruce Beresford's Tender Mercies (1983), and King Baggot's classic silent film, Tumbleweeds (1925). Hubbard/Birchler's Grand Paris Texas intricately intertwines narratives and meta-narratives. For example, a VHS tape of Wenders' film is discovered on the shelf of the town's only video store. The last section of Wenders' film was taped over years ago, making it impossible for local residents to see the movie's ending. In Grand Paris Texas, this anecdote references the open narrative techniques employed by Hubbard/Birchler. In the photographic series Tape, the artists acquire the partially-erased video cassette, then dissect and observe it from each angle like an archaeological artifact.

Méliès (2010) and Grand Paris Texas (2009) are the first two installments in Hubbard/Birchler's trilogy exploring the social and physical sites of cinema. The Alturas Foundation supported the creation of Méliès as part of its Artist-In-Residence program. Grand Paris Texas was commissioned by the Modern Art Museum, Fort Worth.