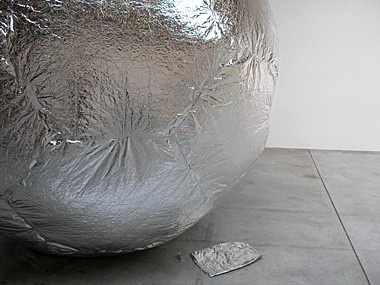 Tanya Bonakdar Gallery is pleased to present Bruegel Project, Ian Kiaer’s third solo exhibition with the gallery. Achieving complexity with a notable economy of means, these five new pieces, installed in gallery two, continue Kiaer’s practice of combining found objects, sculpture, architectural models, painting, and drawing, to create evocative tableaux. Heavily researched, Kiaer’s works reference a diverse array of visionary figures and utopian movements from the history of art and architecture, science, and social philosophy, without explicitly revealing their relation to each other. A part of a Pieter Bruegel painting, painted in subdued neutral shades is juxtaposed with a rumpled yellow drawing; a semi-inflated balloon made from reflective insulation film rests next to a miniature silver cube of aluminum foil; each of these arrangements is precisely composed and subtly evocative, inviting the viewer to build up their own narrative through the fragments.

Flemish painting, 1970s Russian science fiction, and the ideas of the futurist architectural collective Archigram, serve as influences and combine to provide a point of departure for the works presented in Bruegel project. Specifically inspired by the moment in Andrei Tarkovsky’s film Solaris when the camera enters the Bruegel painting, “Hunters in the Snow” lingering over different figures in the composition, Kiaer similarly isolates elements of a Bruegel painting, juxtaposing them with fragmentary references to futuristic utopian architectural movements. In “Bruegel project: yellow film,” a plaster-cast cow, alluding to Bruegel’s herd, emerges from a found, redundant cabinet, in front of a sheet of transparent yellow film, which frames the space, creating a discrete environment that the viewer can enter, just as Tarkvosky enters Bruegel’s painting with the camera.

Absence, nostalgia and romance are present throughout the works, in material, as well as composition and content. “Bruegel Project: fond” is perhaps the most direct referent, while the slightly deflated sphere in “Bruegel project: survival balloon” also alludes to the loss of the utopian; its fragility subverting the practicality of the visionary ideas it is meant to represent.

For further information please contact Claire Pauley at 212-414-4144, or claire@tanyabonakdargallery.com