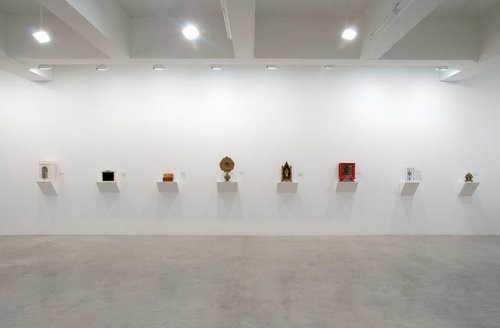 Tanya Bonakdar Gallery is very pleased to present Relics and Reliquaries, an exhibition of sculpture and installation by Jeffrey Vallance. This will be the artist’s first solo show with the gallery.

For over thirty years Vallance has turned a critical and humorous eye toward his own wide-ranging experience, using his adventures as the basis for his drawing, sculpture, installation, and performance based pieces. His childhood in California, voyages to the Polynesian Islands and Iceland, residences in Las Vegas and the Arctic, and sojourns to the Vatican are all represented in his work. Vallance’s examination of these memories, journeys and explorations combines a pseudo-anthropological approach with an art historically informed practice, and addresses themes of faith, myth, and ritual, the power of pop culture, and the historical and contemporary geo-political landscape. Interweaving these themes and topics, Vallance presents the results of his inquiries in works that are at once wittily subversive and earnestly revelatory.

Installed throughout the gallery’s main space, Vallance’s 'Relics and Reliquaries,' are sculptures that irreverently sanctify seemingly banal objects of personal significance to the artist in small intricately crafted cabinets that recall traditional Catholic reliquaries. A single broken Christmas light is lovingly enshrined in a small box crowned with a cross; a 'soap-on-a-rope' in the shape of the Polynesian God Tiki reclines in an intricately carved vessel lined with velvet. Each reliquary is installed with a corresponding plaque that gives the reason and context for its importance to Vallance. Together the works and their explanations form a visual and textual hagiography for the artist. Blurring the line between the holy and the secular, these pieces seem to propose that certain objects have the same transcendent power to access the memories, thoughts and feelings of individuals as relics have to access the faith of the believer. Vallance makes this proposition in a manner that is as much playful as it is provocative. His expansive view of what constitutes a relic and what a relic might be presented in is not meant to undermine the religious use of this form of presentation; instead his sculptures exist alongside traditional relics and reliquaries, as a new addition to the genre.

Vallance has always been an avid collector and since he was a child he has experimented with modes of presentation, even building a museum in his bedroom. 'The Brown Wall,' in a humorous reversal, brings a piece of Jeffrey’s home to the gallery. When moving into their ‘50s tract home in the Valley, Vallance and his wife were confronted with a strange brown wall in their living room, and decided to 'go with a brown theme and put all brown artifacts on the wall so it looks intentional.' Continuing Vallance’s investigation of methods of display, 'The Brown Wall,' presents artifacts and mementos from trips to places as far as Lapland and as close as a neighboring thrift store in Vallance’s own taxonomical order.