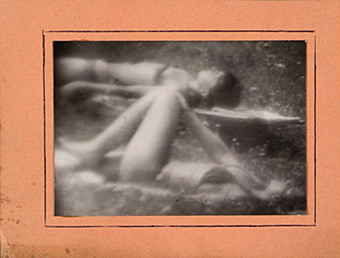 Vladimir: ‘They all speak together.’

Estragon: ‘Each one to itself’

This wry exchange – which, like the exhibition’s title, is gleaned from a well-known passage in Samuel Beckett’s Waiting for Godot - incidentally describes a basic condition of any exhibition of disparate art works. This loosely staged arrangement of works by ten European artists from different countries and generations speaks in a range of accents of various sedimented pasts, displacements over time, and passages through landscapes, real, imagined or metaphorical. Gerard Byrne’s on-going photographic project ‘A country road. A tree. Evening’ takes the setting for Beckett’s classic play as a point of departure. Blithely discounting the author’s own comments on the origins of this setting, Byrne has produced a series of photographs of more or less appropriate roadsides in Ireland and France, which Beckett is known to have visited prior to the (non)appearance of Godot in 1953. Byrne’s theatrically lit landscapes find a counterpoint in Stephen McKenna’s ‘Small Albacora’, an oddly disquieting painting of a hotel swimming pool fringed by a crescent of empty blue sun-loungers, which has the surreal air of an abandoned stage set. Despite its contemporary setting in a holiday resort in Southern Portugal, this picture somehow retains the memory of the allegorical ruins and remains that characterized McKenna’s work in the 1980s, viewed at the time within the context of the neo-classical strain of postmodern painting. Anna Barham’s multi-part installation responds to a classical archeological site, the excavated city of ‘Leptis Magna’, located in contemporary Libya, fragments of which were transported from North Africa in the early 19th century and reconfigured at Virginia Water in Surrey by George V as an ornamental temple. Barham’s small-scale sculptural evocations of this ancient Roman African city, fashioned from discarded household materials, and her dizzingly animated concrete poem wrought from the words ‘Leptis Magna’, constitute a set of further dislocations and reconstitutions.

The sculptural elements in Kate Davis’s four-part installation resemble the fossilized remains of contemporary domestic objects unearthed by an archaeological dig in some distant future. Davis’s installations tend to build up allusively from an encounter with significant figures from 20th-century art history (e.g. Meret Oppenheim, Barbara Kruger, Faith Wilding). While her most recent engagement has been with questions of reflection and projection as raised by the ‘Mirror works’ of Joan Jonas in the 1970s, her contribution to this show specifically addresses the photographs of Miroslav Tichy within the context of this broader investigation. Tichy studied painting in Prague in the 1940s, but led a troubled life thereafter, which included numerous stretches in prison and in psychiatric care as well as frequent clashes with the Czech authorities. For much of the 1970s and 1980s this self-declared ‘prophet of decay and pioneer of chaos’ roamed the streets and public places of his native town in Moravia, taking hundreds of snapshots with a rudely customized camera, often focusing from afar on women sunbathing or swimming in a public pool which he was prohibited from entering. Davis’s work honours the melancholic intensity of Tichy’s distressed and worked-over images while self-reflectively ‘mirroring’ and subtly refracting his use of the female body as icon or motif. Male and female figures alike appear intermittently in the work of Ulla von Brandenburg, sometimes in fragmentary or highly stylized form. The bodies that haunt her work across a variety of media that include film, sculpture, drawing and performance, have an air of ghostly theatricality that self-consciously hark back to the dramatic tableaux, esoteric spiritualism and fin-de-siecle symbolism that typified the turn of the last century.

Diaristic intimacy is mixed with far-flung cosmic fancy in Isabel Nolan’s sculptures, paintings, drawings and wall-hangings, which sometimes wistfully allude to faraway galaxies, while at the same evoking a cloistered world of quiet desperation and compensatory joys. Her floor-based sculpture ‘The unfolding moment’ suggests a delicately exuberant but precarious rapprochement between the notions of containment and escape. It is obliquely complemented by Bojan Sarcevic’s more chromatically austere, wall-hung sculpture, whose formal self-sufficiency does not preclude associative flights of fancy - we may idly picture a windblown tree in late fall, a kite, or a boat under ragged sail. While much of Sarcevic’s recent work in a range of media that includes collage and film registers a conscious engagement with the historic residue of utopian modernism, this untitled sculpture has a lightness and openness that seems relatively unbounded by time or place. The rich mélange of ostensibly incompatible styles and forms that has informed Neal Tait’s painting over the years barely begins to account for the quietly perverse nature of his imagery. Despite many obvious dissimilarities in form and facture, Tait’s work may be related, in terms of its elusive, shape-shifting character, to the paintings of Tony Swain, which are patiently built up in overpainted increments on found images in newspapers clippings, which are variously mutated sometimes almost to the point of occlusion. In comparable manner, Tait’s paintings evolve in unpremeditated ways in the course of their gradual development, often consigning their points of pictorial departure to the ghostly status of faint pentimenti. Yet, in keeping with the ensemble of works in which they are here presented, they never entirely mask the memory of bygone images or muffle the rustle of antecedent voices.
www.tanyabonakdargallery.com