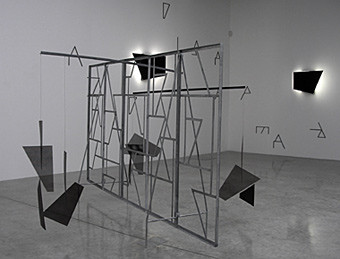 Tanya Bonakdar Gallery is very pleased to present We Make an Unsubstantial Territory, an exhibition of new sculpture by Martin Boyce, and the artist's first solo show with the gallery. Creating groupings of works that simultaneously explore the poetic beauty and the potential menace of the urban landscape, Boyce transforms the gallery into "a place out of time," a space that recalls and references conventional public areas—the playground, the highway underpass, the parking lot—but seen sketchily, as though the viewer were able to enter and explore a fleeting memory, or a fuzzy snapshot.

Both the individual works and the presentation as a whole draw from and reference a photograph that Boyce found in a book on French Modernist gardens, an image of four concrete trees created by Joël and Jan Martel for the 1925 "Exposition des Arts Décoratifs" in Paris. These trees, Boyce says, "represent a perfect collapse of architecture and nature," and are emblematic of his ongoing exploration of the oppositional elements of contemporary urban existence: the natural versus the constructed, the populated versus the uninhabited, the old versus the new.

Boyce finds fertile ground in investigating these dichotomies, and in his sculptural installations all the inanimate inhabitants of public spaces become characters: the phone booth, the streetlamp, the ventilation duct, the chain-link fence, the park bench, the waste bin, the ashtray, and so forth. Boyce is interested in the lives of these objects—the extent to which they are informed by the context of their original manufacture, and the alternative life they might lead if separated from that meaning. Estranged from their original purpose, Boyce's sculptures group together and form a cohesive and immersive environment, an imagined or dreamed landscape that is eerie and liminal, one that the critic Will Bradley calls, "both a proposition about social space and a dreamscape in itself."

A column installed in the middle of the gallery serves as the literal and metaphorical center of this imaginary landscape. Though it does not support the structure of the building, it is imposingly solid and simultaneously elegant, providing the most direct reference to Joël and Jan Martel’s concrete trees, with sail-like panels extending as Modernist branches from the column's top. A double phone booth stands nearby, the contours of its box echoing those of the "branches" on the column. Telephone booths are a disappearing marker of public space, the almost-ghosts of the urban landscape, displaced by the personal and private use of mobile phones. Here they sit quietly, evocative of both the past conversations they enabled and their increasing obsolescence today. Like its counterpart the phone booth, the ping-pong table references an outmoded original, in this case a leisure object. In opposing corners of the gallery, a text work converses with the viewer. The letters hang suspended, as though caught rearranging themselves, spelling the phrase "we appear" in one corner “and disappear,” on the opposite wall. Text also appears on the ventilation ducts that run around the baseboard of the gallery; these beautifully patterned grills are enlarged and re-imagined in the screens that further divide the space.