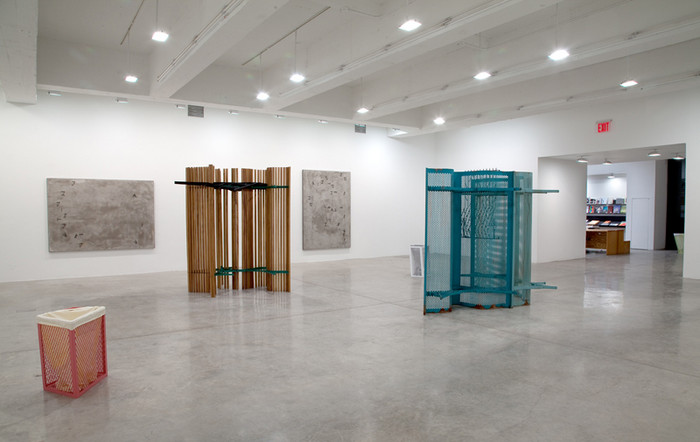 Tanya Bonakdar Gallery is pleased to present Martin Boyce's second solo exhibition at the gallery entitled Winter Palms. Continuing the artist's ongoing exploration of cycles in visual culture, Boyce makes specific reference to the ghost of Modernism as it haunts the public urban and architectural landscape. Boyce's inanimate objects suggest an imaginary public space, illustrating the potential for poetry and romance within the sleek cool of industrial design and the reference to the urban environment. Through this installation, one's fleeting memory of a commonplace object, or experience of an everyday place, is frozen and then altered through positioning and placement of form, language and color.

The title of the show, "Winter Palms," suggests a palm tree in cold weather, and a location perpetually out of season. As such, Boyce's individual pieces occupy a dreamlike atmosphere or alternate universe - unsettled in their separation from modern history, design and architecture. The artist imbues familiar forms with new life as they are stripped of their former meaning, emphasizing the potential for change over time and the mutation of all objects, even ones that have a strong grounding in past theories and concept. Placing the forms in a contemporary context, Boyce explores "how the original political or aesthetic ethos has changed over time." For example, the iconic angularity of many works finds their roots in the "concrete trees" created by Jöel and Jan Martel in 1925 for the "Exposition des arts Décoratifs" in Paris. As described by the artist, these trees "represent a perfect collapse of architecture and nature," and are emblematic of his ongoing exploration of the oppositional elements of contemporary urban existence: the natural versus the constructed, the populated versus the uninhabited, the old versus the new.

In the major autonomous free-standing sculpture in the exhibition, Boyce fabricates what appears to be a cluster of functional outdoor park benches, tilting them on their side to emphasize the perforated surfaces, rust streaks, and smooth wavy contours. Although we still recognize their original function, this new composition evokes a Japanese screen, a flowing theater curtain, or, given the soothing green/blue color, gentle ocean waves. In another work, the form of a rectangular trash bin has been pushed nearly to its breaking point, activating the composition of a usually static functional object while endowing it with a psychological effect. Pale hooded sweatshirts, faded and worn, suggest a figurative absence as they are tightly fitted like garbage bags inside these diagonal cubic structures. Boyce carries the "Winter Palms" theme of displacement and the mood of "a lost place" through several other works, specifically the wall mounted slabs, which display texts that read "empty pools," "undisturbed air," and "remembered skies." This series of wall mounted text works each feature wood-grain patterns cast into the concrete, along with simple or complex linear patterns that serve as background for steel text and phrases. Boyce makes visual reference to gates and window grills, thus creating layers of subconscious tension, yet these forms are balanced by poetic, often abstract references to nature via the angular "concrete trees" that we have come to recognize as Boyce's grid pattern, along with text incorporated into the works' formal structure. These works and more suggest the threshold, screen, or filter which defines space in architecture, divides one place from another, and/or serves as a frame for viewing.