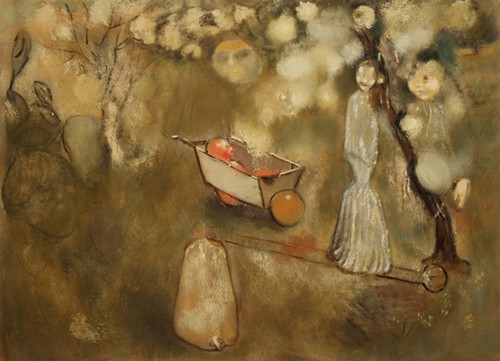 Tanya Bonakdar Gallery is very pleased to present Neal Tait's The Dressmaker Who Lived on the Outskirts, an exhibition of new paintings and drawings that comprise the artist's first solo show with the gallery.
Diverse in palette and composition, the paintings and drawings that make up the exhibition all result from a process that the artist describes as beginning quite openly; figures and characters come and go, and possible scenes begin to describe themselves through a dialogue. Each work presents its own set of problems and possible solutions, and different types of stories evolve through this engagement.
The title of Tait's exhibition, The Dressmaker who Lived on the Outskirts, a clever turn of phrase that suggests the beginning of a tongue twister, or the description of a character from a nursery rhyme, not only sets a humorous tone for the show, but also relates to the artist's formal concerns. Tait fashions together disparate images the way a dressmaker might sew scraps of fabric into a garment, creating a world from an accumulation of imagery that does not preference any particular element, instead allowing the quieter peripheral voices in the work to speak. The artist describes the elements that he brings together as 'things that were once one thing and like many other things can be pieced together to form a vetement onto which moving forms are described.' The resulting works serve as glimpses into a parallel existence, one that seems most closely related to the rhetorical logic of fairy tales or the absurdist humor of Surrealism, reminding the viewer of the fleeting oddness of a remembered dream.
Like the memory of a dream, Tait's works resist logical interpretation, existing on the 'outskirts' of our understanding, and occupying a space somewhere between the categories that are used to classify images: abstract versus figurative, narrative versus associative, etc. While there are figurative elements in most of Tait's pieces, with characters that are animal, vegetable, and mineral, and sometimes all three at once, the works do not follow any obvious storyline. The occupants of the world that Tait creates are sometimes pleasingly and sometimes disturbingly undefined: a creature with a pig's body and a human face is depicted in profile, amorphously melding with a fellow composite that seems to be part teddy bear, part slug and part human; a teacup with human features arranged in a vacant expression sits atop a cherubic head and a jumble of possible organs. In one painting, titled 'Au Café,' a crumpled figure uses the head of another as a leaning post, and a conflation of time frames and epochs is suggested by period dress and style. The café, once a site of bohemian life and intellectual thought is haunted by pale ghosts, at once tragic and humorous.
There is no stasis in Tait's paintings and drawings, the viewer feels as though the action is still unfolding, and it is uncertain where these metamorphoses ultimately lead. While there is no certainty in Tait's works, and precise meaning is impossible to coax from the compositions, they are all extremely evocative—perhaps this is one of the reasons for their striking resonance, as the critic Michael Bracewell notes, 'their very unknowability is at the root of their memorable presence.'
Based in London, Tait’s recent projects include Dark Mutter, MDD (Museum Dhondt-Dhaenens), Deurle, Belgium, 2006 (solo); Hoch Hinaus, Kunstmuseum Thun, Switzerland, 2005 (group); Direct Painting, Kunsthalle Mannheim, Germany, 2004 (group); Atomkreig, Kunsthaus Dresden, Germany, 2004 (group); Neal Tait, Douglas Hyde Gallery, Dublin, 2002 (group); Painting on the Move, Kunsthalle Basel, Switzerland, 2001 (group). The comprehensive, full color monograph Neal Tait, featuring contributions by Jeremy Millar and Michael Bracewell, was published by Other Criteria in 2006.
www.tanyabonakdargallery.com