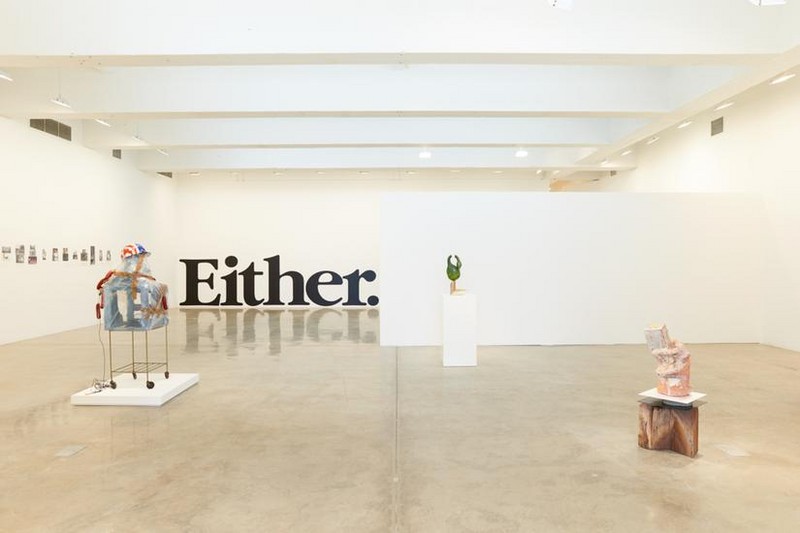 A CARAFE, THAT IS A BLIND GLASS

A kind in glass and a cousin, a spectacle and nothing strange a single hurt color and an arrangement in a system to pointing. All this and not ordinary, not unordered in not resembling.

The difference is spreading.

So begins Tender Buttons, Gertrude Stein’s influential and yet perplexing collection of texts on objects, food, and rooms. First published in 1914, Stein’s book is an idiosyncratic and seemingly nonsensical catalogue of mundane objects. More than one hundred years later, her work remains a relevant lens through which to understand the relationship between words and objects. Inspired by Stein’s composition, this exhibition brings together the work of twelve artists to explore how sense is made and unmade in the language of things. The peculiar grammar in an object’s “moment of consciousness,” aims to convey the sense of a thing, rather than describe its mimetic accuracy. It questions the inherent character of things when they have been reassigned an unlikely set of words, and suggests a surprisingly relevant approach to the relationship between the readymade and its found object counterpart.

A damp cloth, an oyster, a single mirror, a manikin, a student, a silent star, a single spark, a little movement and the bed is made. This shows the disorder, it does, it shows more likeness than anything else, it shows the single mind that directs an apple.

Like Stein’s enigmatic inventory, the exhibition collects objects –a bin, a gourd, two locks, a banana – that masquerade as familiar things and reveal double meanings: difference in likeness, and likeness in difference. Nairy Baghramian’s mesh container, Waste Basket (Bins for rejected ideas) (2012), is an empty permeable vessel, spilling blue rubber as though it were liquid, while Frank Benson’s work cuts the head of a vegetable to extend the elegant swan line of his sculpture. Magali Reus’ intricate padlocks seem to measure unknown units, locked to the wall, pretending to be everything and nothing that their composition indicates. Similarly, Toronto, Canada based artist Roula Partheniou makes her New York gallery debut with an architectural intervention of uncanny replicas of household things.
If objects in this show had cause to speak, they may use a language close to Stein’s. At times, things literally speak for themselves, about themselves. Turner Prize winner (2013) Laure Prouvost’s found objects are suffused with accompanying voices and text, and Darren Bader’s table arrangement of porcelain chicken, muffin, and a shirt, includes a type-written list of poetic and impossible things. At times speech is implied in form as in Esther Kläs’ new installation of abstract objects that compose the space and movement of a room with quiet gestures. Rachel Harrison’s visceral sausage-laden cart entitled © 2004 Hasbro Inc. (2015) and Arlene Shechet’s bulbous clay forms in Above and Beyond (2015) seem to expand from inside themselves, moving from form to formlessness, erasing their familiar elements in their own articulation.

The distinction between the part and the whole is echoed in Luis Jacob’s Album XI (2013), a 40 panel work comprised of hundreds of found images. Exploring the nature of an image as an artifact, and as a material object, Jacob’s composition simultaneously acknowledges the unavoidable narrative connections that images, like words, invite. Haim Steinbach’s found text works, Either and Or, also reflect Stein’s intuition: a word, like an object, is inherently related to its indicative meaning in both context and form. The show, like a blind glass, suggests the alien within the familiar through juxtaposition and alteration. Together, the artworks form a system pointing to the linguistic and psychic nature of our encounter with objects.

Andria Hickey is Curator at the Public Art Fund where, since 2011, she has curated exhibitions throughout New York City with artists such as Danh Vo, Katharina Grosse, Olaf Breuning, Monika Sosnowska, and Oscar Tuazon as well as group exhibitions Lightness of Being (2013); Configurations (2012); and A Promise Is a Cloud (2011).
www.tanyabonakdargallery.com