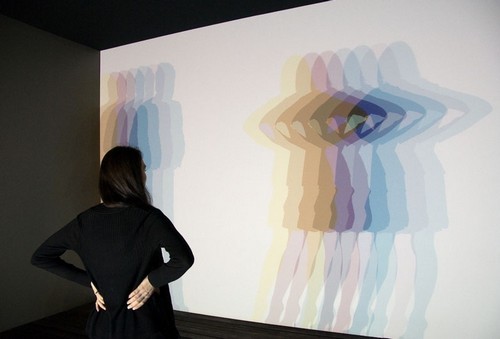 Tanya Bonakdar Gallery is very pleased to present an exhibition of new works by the Danish-Icelandic artist Olafur Eliasson (B. 1967). Eliasson's sixth solo show at the gallery continues his exploration of and experimentation with modes of perception and the experience of space and time. Focusing on movement, color, and light - and the interplay between the three phenomena - the exhibition involves the viewer in a collaborative creative process. Throughout his career, Eliasson has challenged the notion of the artwork as a static object, instead suggesting that the meaning and generative potential of each work lies in the exchange between the piece and the viewer. It is the visitor's experience, his or her subjective perception and mediation of the work that activates it; in turn Eliasson's installations, public projects, photographs and paintings prompt a new awareness in the visitor of his or her own methods of interpreting the world.

Within the main gallery space, an abstract structure outlines a living space, intimate and domestic in scale. The walls of Multiple shadow house (2010) are comprised of a simple wooden framework supporting large expanses of projection screens. Groups of projection lamps cast steady light upon the screens, yet their effects remain unarticulated until visitors interact with the structure. Upon entering, the visitors block the individual sources of light and cast variously colored shadows that change according to their movements. The work is a situation experienced as it is created. The user negotiates and constructs his or her own surroundings, and the architecture is animated by the visitor.

The perception of visual imagery in the form of color and light is also addressed in Intangible afterimage star (2008), installed in the side gallery space upstairs. Six spotlights are synced to project geometrical forms in blue, yellow, magenta, green, and turquoise onto the wall, intersecting and layering, and building towards a narrative of Constructivist abstraction. As the intense projections fade in and out, complimentary afterimages stay on the visitor's retina and appear to multiply the color compositions. As a result, the film is only partially produced by the spotlights' projection; the rest is contributed by the viewer.

In the main gallery upstairs, Eliasson exhibits a series of watercolor drawings on paper. Configured in sequences, they use ellipses and circles as narrative exercises on the perception of space and movement. While shades and hues play an important part in these watercolors, the oil painting Colour experiment no. 3 (2009) is part of ongoing research into color conducted at Studio Olafur Eliasson. The studio has been developing a set of handmade oil paints that range through the full spectrum of visible light, experimenting with their physical properties and interactions. Circular in form, the painting expands on the traditional model of a color wheel, wherein each of 360 degrees is painted in one color and corresponds to its complementary afterimage located directly across from itself.