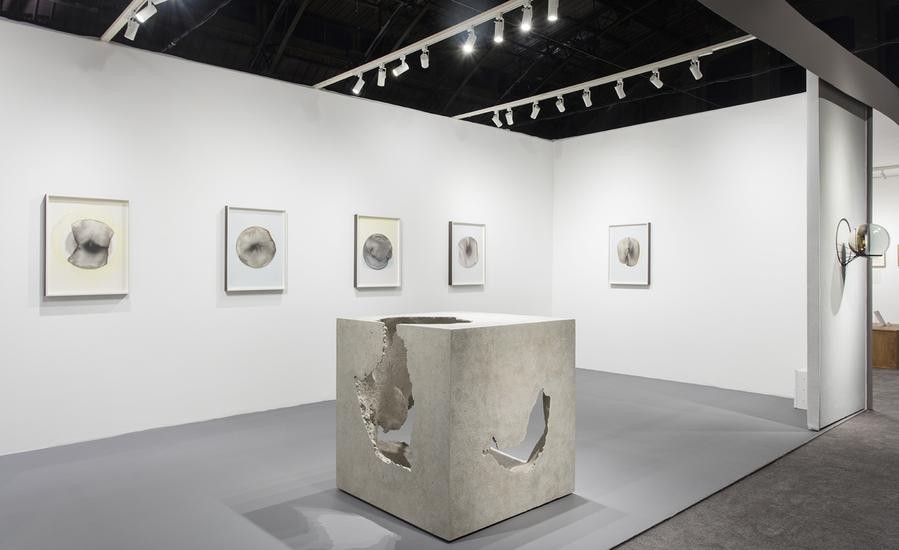 Tanya Bonakdar Gallery is pleased to announce a solo presentation of new works by Olafur Eliasson at the ADAA Art Show 2017. Heralded as one of the most influential artists of his generation, Eliasson explores the cognitive and cultural conditions that inform our perception. Described by the artist as “devices for the experience of reality,” his works prompt a greater sense of awareness about the way we engage with and interpret the world. The solo booth at the ADAA will feature a selection of major works including sculptures and works on paper.

Among the works on view is a major new sculpture made by casting a onemeter cube of concrete around massive chunks of glacial ice. Large openings in the concrete’s smooth surface reveal a mesmerizing landscape that embodies the memory of the now-melted ice, which is vividly present in its absence. Eliasson collected the ice used to create this artwork—titled The presence of absence (Nuup Kangerlua, 24 September 2015 #3)—while harvesting icebergs off the coast of Greenland for the installation of Ice Watch in Paris, on the occasion of the UN COP21 climate summit in 2015. At his studio in Berlin, the blocks of ice became a focus of research for Eliasson’s architectural firm Studio Other Spaces. The ice was used to design the interior of a large-scale building as part of a proposed project for Ilulissat, Greenland—an example of the artist’s continual investigation of how we form and use space. As this work also shows, one important goal of Eliasson’s work in this area is to motivate action by making climate change a felt, direct experience.

A series of large-scale watercolors created with fragments of the melting glacial ice will also be on view. This body of work marks a critical meeting point between Eliasson’s interest in environmental issues and his investigation of color phenomena. Created by applying thin layers of pigment on paper, these recent watercolors present an abundance of tones and intensities of hues rarely seen in the medium. By establishing a new process for transitioning between colors and luminosities, the artist creates a subtle illusion of motion and depth in a two dimensional format. Here Eliasson brings together the main issues that inform his work, and re-contextualizes them by creating a holistic presentation that is at once engaging, challenging and timely.

Tanya Bonakdar Gallery is also excited to announce its eighth solo exhibition with Olafur Eliasson at the gallery on West 21st street, scheduled to open on Thursday, March 23rd. The gallery exhibition will feature a dynamic array of works by the artist, ranging from immersive installations to sculptural works, throughout both of the gallery's exhibition spaces.

Since the mid-1990s, the artist’s work has been at the center of numerous exhibitions and projects around the world. In 2003, Eliasson represented Denmark at the 50th Venice Biennale with The blind pavilion and, later that year, he opened the celebrated work The weather project at Tate Modern’s Turbine Hall. The artist’s first retrospective, Take your time: Olafur Eliasson, opened at the San Francisco Museum of Modern Art in 2007, before traveling to the Museum of Modern Art and PS1 in New York, The Dallas Museum of Art, The Museum of Contemporary Art in Chicago, and The Museum of Contemporary Art in Sydney, through 2010.

In 2016 the artist had solo presentations at the Leeum Samsung Museum in Seoul, Korea; the Palace of Versailles, Versailles, France; and the Long Museum in Shangahi, China. Other significant solo exhibitions include Innen Stadt Außen at the Martin-Gropius-Bau in Berlin (2010); Your chance encounter at the 21st Century Museum of Contemporary Art in Kanazawa, Japan (2009–10); The New York City Waterfalls, a major public art project for the city of New York (2008); Notion motion at Museum Boijmans Van Beuningen in Rotterdam (2005); Colour memory and other informal shadows at Astrup Fearnley Museet for Moderne Kunst in Oslo (2004); Chaque matin je me sens différent, chaque soir je me sens le même at Musée d’Art Moderne de la Ville de Paris in France (2002); Your only real thing is time, at The Institute of Contemporary Art in Boston (2001); and The curious garden at Kunsthalle Basel (1997), among many others. The artist has also produced a number of permanent installations and site-specific works, including Your rainbow panorama at ARoS Aarhus Kunstmuseum in Denmark (2011); the facades for Harpa Reykjavik Concert Hall and Conference Centre in Iceland (2011) in collaboration with Henning Larsen Architects; Whenever the rainbow appears at The Israel Museum in Jerusalem (2010); Sunspace for Shibukawa at the Hara Museum ARC in Shibukawa, Japan (2009); and The parliament of reality, a permanent outdoor installation at Bard College in New York (2009).
www.tanyabonakdargallery.com