Punching Through The Clouds 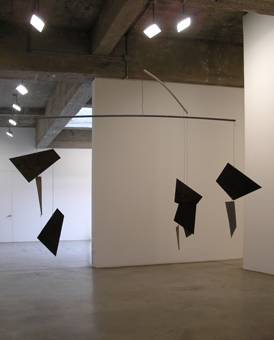 PUNCHING THROUGH THE CLOUDS

As sculptors and as photographers, Martin Boyce, Bernhard Prinz, and Florian Slotawa are among the foremost artists of their generation working in Europe today. This exhibition is the first comprehensive US show to present the artists' combined sculptural and photographic oeuvres. A common feature of these three artists' work is their use of furniture and everyday objects as material for their sculptures. Allusions and direct references to design and art-historical themes and epochs as well as genre-specific reflections are here combined into subtle commentaries on the present.

The furniture, design objects, and pieces of clothing used in the works are playfully stripped of their functionality; their aesthetic formal vocabulary is transformed. The result are vexing objects and pictures that question both critically and conceptually the utopias informing modernity: a faith in the social impact of applied artistic design and social progress. Through subversive interventions, connotations are altered, and fragmented, imaginary landscapes are formed that seem to point less to the high-flying optimism of modernism than to an increasingly reflective stance following the collapse of ideals.

The exhibition title comes from a quotation of Mies van der Rohe's, and is also the title of a work by Martin Boyce shown in the exhibition. Here, van der Rohe's lyrical description of skyscrapers and the power of multi-media representation indexes the ephemeral and the ostensible, as well as his virtuosic use of a whole range of media to visualize his ideas. 'Punching Through the Clouds' schematizes the relationships, between form and material, presence and transience, as well as the link between the structure and representation of reality in sculpture and photography.

Martin Boyce's sculptures, photographs, texts, and wall works explore the narrative potential of seemingly familiar, anonymous urban landscapes. Boyce distills elements from the visual languages of modern design, film, and architecture. Playing with polar opposites such as familiarity and distance, inside/outside, or harmony and tension, he creates within his minimal installations a complex structure of imagined cultural and social spaces, addressing the intangible fear, paranoia, and dysfunctionality of contemporary urban life, at the same time producing an almost nostalgic dissociation. In doing so, Boyce provides hints that allow the beholder to generate his or her own ideas and spaces. The phrase 'Punching Through the Clouds' is presented within the grid pattern of four ventilation grills. They act as a poetic description of the soaring optimism of the glass tower; the work is dedicated to the skyscraper at a time that the form has been forever contaminated.

The photographs and sculptures of Bernhard Prinz create a very specific ambiguity. His photographic images play enthusiastically with the camera's ability to deceive and capture the fleeting nature of the constructed and the momentary. They question the institutionalization of central perspective as well as the belief in the documentary power of a photographic representation as a proof of veracity. Instead, photographs show the presence of something that at the moment of beholding is actually already past, or indeed never existed in the first place in the way it appears. Prinz' use of less 'classical' sculptural materials such as fabrics, articles of clothing, everyday objects, and pieces of furniture, lends his installations and the objects in his photographs the character of ephemeral sculptures; the white that dominates the works chosen for the show at Tanya Bonakdar Gallery also creates an atmosphere of innocence, which is then disrupted by subliminal signs of violence and decay.

The works by Florian Slotawa explore the significance, definition and limitations of sculpture, its fleetingness or durability, and the border between everyday life and art. Slotawa mostly uses objects found at the places he works or lives: hotel furniture, museum displays, objects belonging to the gallerist, as well as his own personal possessions. Over nine years he built several huge installations with all of his belongings. This series of works came to an end when a collector bought all of Slotawa's possessions. Today these former belongings of the artist are stored and the collector is contractually forbidden to unpack them. When Slotawa sold them, he took photographs of every item, categorized by use or formal similarity. A selection of these photographs are now seen at Tanya Bonakdar Gallery. Also the concept of the sculpture shown at the Tanya Bonakdar Gallery originates in Slotawa's understanding of sculpture as performance. For the show he used the global network of an international furniture manufacturer, IKEA, building a high-rise-like sculpture with furniture ordered from the local store. Using an identical order list, identical sculptures will be built in two further exhibition venues in Europe and Asia. Together, Slotawa's works investigate the new and strange relationship between the individual and the material object, or ownership, in the context of the global market.

For further information and images please contact Claire Pauley on 212 414 4144 or at: claire@tanyabonakdargallery.com