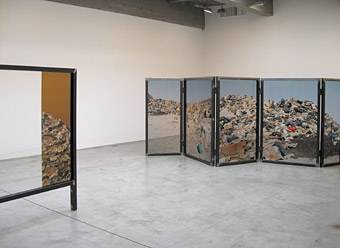 Blurring the divisions between two-dimensional and three dimensional space, the new photographs and sculptures shown in Gebilde create a fusion between photography and sculpture, presenting work in each medium that supports and expands upon the other. The title of the show, Gebilde, references this overlap, translating into English most closely to “construct”, Gebilde means “shape” or “creation” and can only be used to describe three dimensional objects. “Bild” however, means image, thus Gebilde refers the overlap between two-dimensional and three-dimensional elements.

Explorations and challenges of traditional spatial orientation are inherent in Sabine’s work as the subject of her photography and sculpture is most often existing architecture; she reproduces and recreates the locations that are featured in her pieces, on a new scale or in a different dimension. As in past works the pieces included in Gebilde examine the architecture of the city, focusing specifically on abandoned spaces. The apparent emptiness of these images gives way to the imagined presence of past or future structures, referencing both destruction and creation, each inhabiting the space equally, and presenting the city as a sort of a random urban wilderness.

There is a rough, almost brutal quality to the locations that Hornig has chosen to photograph, as though something has been roughly torn out of the space, furthering the sense of transformation towards disintegration. In the project gallery, “Window with No Floor I” and “Window with No Floor II”, show unfinished brick interiors in which the floor is not pictured, giving the room an endless, dissolving feeling, and challenging conventional notions of finite “interior” space. “Window with No Back Wall” in the gallery’s entryway shows a construction yard enclosed by a grate; no rear wall shuts off the area and the viewer can look through where the wall might have been once, or might be in the future.

The sculptures in the main gallery are three-dimensional manifestations of the layered images in the photographs. The work “Blechhьtte” or “Tin Hut” deals with themes of inversion, contrasting light and dark and interior and exterior space by juxtaposing a solid, sturdy, and opaque rectangular box with the bright and transparent scaffolding-like structure that surrounds it. On a pane of glass there is a strip of negative which depicts a waste-landscape that references the adjacent sculpture, “Landscape”, locating the two in the same surroundings. “Landscape” is a five-part window, which has been placed like a folding screen toward the rear of the gallery. Through the “window” we see transparent sections of the plastic waste of a landfill, the vibrant colors of the discarded refuse compliment the blue sky, and simultaneously contrast the man-made and the natural, creating a spectacularly beautiful image out the most unlikely material, and presenting another inversion, garbage elevated to art.

This exhibition was made possible in part by the generous contribution of the Mondriaan Foundation, Amsterdam.