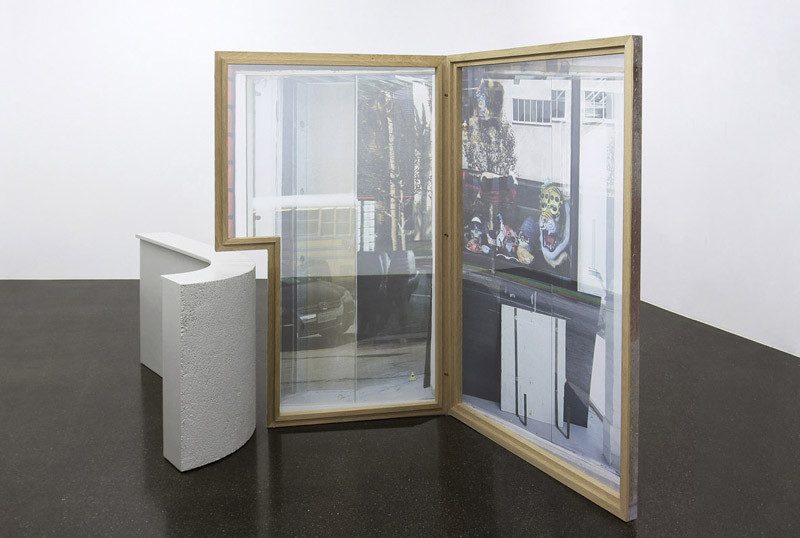 Tanya Bonakdar Gallery is pleased to present Transparent Things, the fourth solo exhibition of new work by Berlin-based artist Sabine Hornig, consisting of three related sculptures and new photographs on paper. The title of the exhibition is inspired by Vladimir Nabakov's book Transparent Things, a novel which explores concepts of time, the metaphysics of memory, the materiality of objects and our experience of the physical world. Nabakov's theme of overlapping time and space is synonymous with Hornig's dialogue about reality and representation, as her works display a relationship to temporality and the simultaneity of events.

Since 2001, the artist has been photographing reflections in store windows in and around Berlin. The resulting images have been exhibited in the United States and internationally as prints mounted behind Perspex and as traversable sculptures. In some of the installations she has used transparent photographic images which investigate boundaries and permeability between the viewer and the object within architectural spaces, object and image. A gaze that would normally linger on the surface of the picture plane here penetrates through and mixes into the space beyond. The experience of seeing behind the image highlights the interplay between mundane and casual seeing versus aesthetic contemplation.

In other works, including photographs of abandoned modern urban display windows, layers of past and present are evoked as a desolate stagnancy vacillates with the possibility of transition. [1] Hans Belting describes this in the catalog essay, "Schau-Fenster." [2]

Viewers do not find themselves either inside or outside but in an abstract location where the camera was positioned that acted like a mirror. Photography is normally based on the principle of temporal linearity, the course of which is held motionless and interrupted momentarily whenever a picture is taken. Here, however, different temporal layers have been created that virtually alternate cyclically - a spatio-temporal continuum. ...thus experiencing a co-presence of two spaces and two times. ...What is in front is no longer separated from what is behind, but both are present simultaneously.

The "before" and the "after" are brought together in time, which - as in Nabokov's Transparent Things - becomes visible in the layers of the transparent object. In Gallery 1, three sculptures transform the overlapping of photography with space into a physical presence, as the usual linearity gives way to such constructed simultaneity.

Verspiegelter Raum / Mirrored Room is a sculpture of a half-open room with a small roof and two large walls formed by transparent photographs. The sculpture is not a mirror, but a view into a room with reflective walls. In several duplications, the front and back areas are not only superimposed, but entirely interchangeable, as the transparency and reflection of the actual surface alternate from front to rear. The transparency defies the role of a traditional photograph by allowing light and activity from behind to penetrate the image. At the same time, the photograph inhibits that which transparent images normally enable: the view into the room.

As the viewer walks around the sculpture and peers through, the space only becomes visible through this movement. The observer is lead to reevaluate perceptions of the image, and the sculptural object, via a three-dimensional experience of the photographic moment. The scale of the photographed objects as well as the sculptures are shrunken to the viewer's scale to act like a counterpart to the viewer's own physical presence and size, all within the confines of a gallery.

Großes Eckfenster / Large Corner Window and Stillleben am Fenster / Still Life by the Window are hybrids of window and door fragments with light, sheer fabric stretched between the structural frames. Architectural fragments - a windowsill, trash can, corrugated tin roof - converse with the images printed on the fabric, as object and photo, tactile material and reproduction, the real and the interpreted, interact. In Hornig's new works, these confrontations are abrupt and direct.

On the walls of the gallery, photographs taken mostly during the artist's recent visit to Los Angeles, depict everyday storefront windows and glass architectural facades. The subjects feature loosely recorded views and "views through" rooms, that one might encounter and overlook in passing. Layers of reflection flatten out the image and create a disorienting spatial experience, as the mediums of photography, sculpture, and architecture support and expand upon each other.