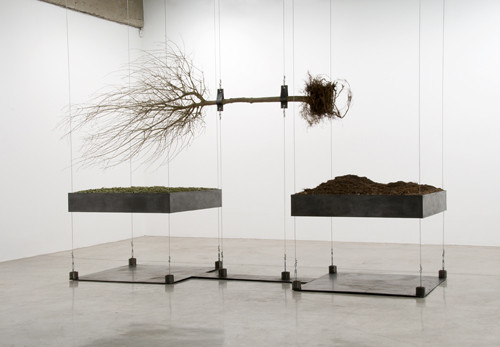 Tanya Bonakdar Gallery is delighted to present, The Nose that Lost its Dog, a group of exceptional new sculptures by Siobhan Hapaska that comprise the artist's fourth solo exhibition with the gallery. Immaculately crafted, Hapaska's works are resonant combinations of disparate images, forms, and narrative styles that explore the tensions between presence and absence, life and death, nature and artifice, threat and safety, and surface and interior, while leavening the heaviness of these topics with wit and pathos.

As with many of Hapaska's iconic works, the sculptures in The Nose that Lost its Dogincorporate a wide-ranging vocabulary of materials. These new works examine notions of intuition and its relationship to choice and consequence, and investigate themes of conflict and resolution in both historical and contemporary contexts.

The playful quality of Hapaska's work is evident in her use of language—each of her titles is at once descriptive and cleverly evocative. Within one: "The Dog that Lost its Nose", which acknowledges the exhibition's name, Hapaska visually represents the condition of a loss of instinct. Made up of eleven stainless steel spheres that hang from the gallery ceiling in one evenly spaced line, each diminishing in size, and fringed with a coil of animal skin, the work rotates on many different axises, each sphere turning its own way, with the disparate movements suggesting a loss of direction that is contrary to the regular patterns in the form and scale of the objects themselves.

A change of direction, or orientation, is also present in "Downfall," which is comprised of an uprooted olive tree, its lifeless skeleton suspended horizontally in the air; its roots disheveled, and its leaves shorn. The olive tree as an object itself is full of meaning and history— commonly recognized as a symbol of peace, Hapaska removes its beauty and vitality as a way of highlighting the destruction and volatility in our world today. With its versatility and multitude of uses (oil, wood, olives), the olive tree was also inextricably linked to the economies of early societies, and it has been argued that the loss of olive trees signals the "downfall" of civilization, providing the origin of the title for the work.

Perhaps the most oblique of the sculptures on view is "Tick", a primitive looking object sculpted from fiberglass. As in "Downfall", this primordial looking form, that seems both alive and lifeless, subverts our understanding of the expected state of nature.

Here, Hapaska has created a geometric exoskeleton that seems part industrial and part animal. The grid framework, which is suggestive of some kind of order, and punctuated by a flashing LED, is in part covered in deerskin. The placid and regular forms of this structure are juxtaposed against a large resinous abstract mass, perhaps the inferred 'tick' to the host?