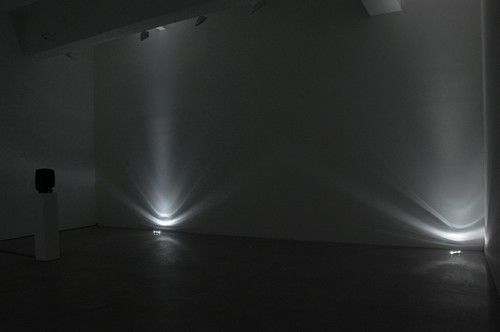 Tanya Bonakdar Gallery is very pleased to present, I See a Darkness, a major new sound installation by Susan Philipsz. Installed in the ground floor exhibition space, this will be the artist’s second solo show with the gallery.

Continuing her investigation of the psychological and sculptural potential of sound, for I See a Darkness, Philipsz creates an immersive, yet ephemeral installation comprised of three vocal and instrumental tracks that resonate throughout two darkened gallery spaces. Based on musical and literary references to such disparate sources as Will Oldham, Santa Lucia, patron saint of the blind, and James Joyce, each song is recorded by the artist and plays out in sequence, leading the visitor through the space while building a narrative that explores themes of longing, loss, and return.

Interested in the ways that sound and space can define and mediate each other, Philipsz’s installations are precise combinations of architecture and song that prompt a heightened awareness in the visitor of his or her surroundings, while simultaneously triggering meditative introspection. For I See a Darkness, Philipsz responds to the gallery’s empty space by removing the natural light, creating a cavernous environment. The dimness of the room, which is illuminated only by small lights on the floor that cast wavering shadows on the walls, focuses the visitor’s attention on Philipsz’s a cappella rendition, sung as a call and response duet, of the song “I See a Darkness” by Will Oldham. A single speaker is mounted on a white plinth, and the response to its call can be heard in the distance from the furthest point of the gallery. Philipsz’s recording of the 19th century Neopolitan barcarolle, “Santa Lucia” plays following her performance of Oldham’s song; an arrangement in four parts, her voice emanates from four separate speakers installed throughout the space. A lilting piano piece, Ravel’s “Pavane for Dead Princess” follows, drawing the viewer through the darkness toward the back space where it is installed. Philipsz performs all three songs in her beautifully idiosyncratic and evocative style, providing, in the words of critic David Velasco, “the experiential framework for an intimate, even transportative, encounter.”

Each song that Philipsz incorporates in the installation explores the interplay between literal and metaphoric light and darkness, connecting the music thematically with the darkened space. As with much of Susan’s work, in I See a Darkness there is also a literary underpinning, and Philipsz uses two characters as points of departure for the piece. As Philipsz describes:

"This new work tells the story of two Lucias: Santa Lucia and James Joyce’s daughter Lucia Joyce. The name Lucia means ‘light’. Lucia Joyce was named by her father whose own eyesight was failing rapidly. She was the light of her father’s life and it seemed that she was destined for great things. Sadly, she felt so overshadowed by her father that it led to her decline. In the end she was diagnosed with schizophrenia and was to live out the remainder of her years isolated in an institution in Northampton, England. Santa Lucia came from Siracuse in Sicily. She is the patron saint of blindness and the guide through dark places. She has always been described as having beautiful eyes and is usually represented holding these eyes on a platter. Lucia Joyce however, inherited a cast in her left eye from her mother’s side of the family. This eye defect was something she was always self-conscious of throughout her life. Santa Lucia will always represent light however Lucia Joyce’s story is one of a bright light slipping into obscurity and darkness. In my work these two characters merge as one.”