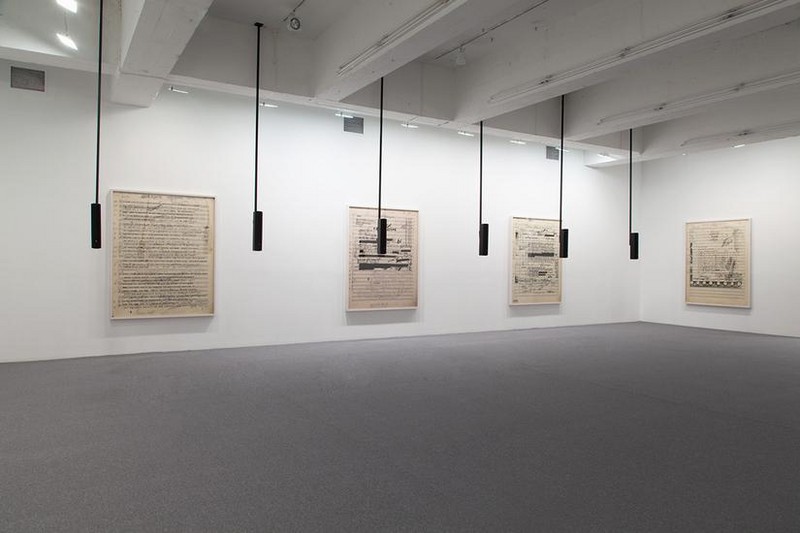 E/I Saturday Discussion: January 10, 2015; 11am
The artist in conversation with art critic Caoimhín Mac Giolla Léith, and Dr. Anne C. Shreffler, Hanns Eisler scholar and Professor of Music at Harvard University
For her fourth solo exhibition with Tanya Bonakdar Gallery, Susan Philipsz presents her acclaimed work, Part File Score, an immersive 24-channel sound installation accompanied by a series of large-scale prints. For the current presentation of the work, the structure has been modified to feature solo violin in a 12-channel format. Drawing from the histories of 1930's émigré artists, Hollywood film scores and McCarthy-era censorship, Part File Score debuted in an exhibition of the same title at the Hamburger Bahnhof, Berlin in early 2014.
Philipsz is fascinated by the generation of émigré artists who fled Germany for America in the 30’s and for her exhibition, Philipsz focuses on the composer Hanns Eisler. Eisler, whose father was Jewish, escaped the Nazis in Germany and moved to Los Angeles where he composed scores for films and was eventually blacklisted as a suspected communist. For the exhibition, Philipsz creates a sound installation based on his musical compositions for early motion pictures. The accompanying series of prints layers digital reproductions of the composer’s archival scores under material from Eisler's FBI file. There is hardly a page in the FBI archive where the typewritten reports are not either overwritten or deleted in black marker. Each page illustrates the paranoia that was at the root of the investigation to determine if Eisler was an active communist agent operating at the heart of the Hollywood dream factory. In a strange way, the FBI pages parallel Eisler's original manuscript scores where he has handwritten his notes or crossed out the musical notation as he was developing the composition.
The 24-channel sound installation is based on a selection of Eisler's musical compositions for films from the 1920s and 1940s. At the beginning of his career, Eisler composed the music for one of Walter Ruttmann’s pioneering early abstract animations, Opus III (1924). His score Prelude in the Form of a Passacaglia (1926) was his first composition for film. He wrote the score Fourteen Ways to Describe Rain (1941) for the film Regen (1929) by Joris Ivens. Later in California Charlie Chaplin commissioned Eisler to write the score for his silent film The Circus (1928), but the composition was interrupted by Eisler’s deportation from the US and only six movements to scenes of the film exist. Eisler’s music was never incorporated into the film, but it was later published in parts as Septet No.2 (1947). Philipsz poetically deconstructs these compositions, isolating each distinct note on its own speaker to create a constellation of tones that fills the gallery with the single voice of the violin heard over 12 channels. At once melodic and dissonant, Philipsz's renditions of Eisler's compositions evoke the emotions of loss, exile, and return that shaped the composer's own life.
Susan Philipsz (b. 1965 in Glasgow) won the prestigious Turner Prize in 2010 and recently participated in Manifesta 10 at the State Hermitage Museum, St. Petersburg. Upcoming exhibitions for the artist include the 14th Istanbul Biennial curated by Carolyn Christov-Bakargiev; Parasophia, Kyoto International Festival of Contemporary Culture, Kyoto (March 7 –May 10, 2015 ); and Salt, Lofoten International Art Festival Norway (June, 2015) in addition to solo exhibitions at the Theseus Temple, Kunsthistorisches Museum Vienna, Austria (April 2015) and Museo D'Arte Contemporanea Villa Croce Genoa, Italy (May 2015). Notable recent presentations include her permanent installation for Governor's Island in New York City, titled Day is Done (Opened 2013), Study for Strings, dOCUMENTA 13, Kassel, Germany (2012); Timeline, a public installation for the Edinburgh Arts Festival (2012) among others. Her work is included in museum collections around the world, such as: The Carnegie Museum of Art, Pittsburgh, PA; Castello di Rivoli, Italy; The Solomon R. Guggenheim Museum, New York, NY; The Hirshhorn Museum and Sculpture Garden, Washington, DC; The Museum of Contemporary Art, Chicago, IL; Museo Nacional Centro de Arte Reina Sofia, Madrid, Spain; The Linda Pace Art Foundation, San Antonio, TX; Sculpture projects Munster, Munster (2007 permanent exhibition); The Tate, London; The Walker Art Center, Minneapolis, MN; among others.
www.tanyabonakdargallery.com