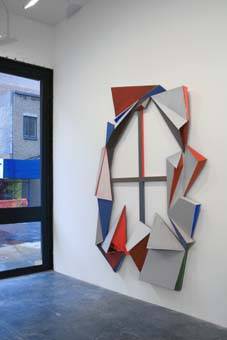 Tanya Bonakdar Gallery is very pleased to announce Blick über ein bewohntes Tal (View over a populated valley), the gallery's fifth solo exhibition with Thomas Scheibitz. New paintings and sculptures feature Scheibitz's ongoing fascination and play with the boundaries between abstraction and figuration. Images culled from the collective consciousness are pared down and layered in a precise balance of color and form. Constructing a delicate narrative of compositions, Scheibitz continues his investigation of man's ability to read, understand and recognize information and images.

Scheibitz's anti-hierarchical practice incorporates painting and sculpture as equals: one becomes both the extension and representation of the other. The crux of Scheibitz's work lies in the slippage of meaning, the play of signifier and signified, and the shift from literal to figurative and back again, all of which occurs among the layers of paint, between planes of mdf, and from one alternately bold or murky color to the next.

Maps, or topographical representations of places real or imaginary, serve as a greatly effective metaphor for Scheibitz's practice in painting and sculpture. From an early traveling survey exhibition of paintings at the Kunstmuseum Winterthur, Ansicht und Plan von Toledo (View and Plan of Toledo, 2001), the literal references to cartography can be cited and followed explicitly. His use of the map as a point of reference has continued through to his last solo exhibition at Tanya Bonakdar Gallery (Brot und Spiele, 2004), which featured (among other work) two monumental paintings on canvas that took interpretations of world maps from disparate eras as their subject. With this current exhibition, Scheibitz renders his 'plan' in hi-relief, juxtaposing painterly sculptural forms against expansive backdrops, themselves layers of color and form, and creating a dialogue between the painting and sculpture that is cyclical and internally referential. The artist turns from map- to model-maker, using formal characters, figures, and architectural structures to comprise a fictional panorama of overlapping fields and brushy landscapes.

The title is descriptive, as the View over a populated valley refers to a summary of perspectives, framings and representations; while Scheibitz’s work does concentrate on the topographical it is not without narrative and historical reference. Figurative characters act within his various frames; Hercules scrapes the sky, a Mary speaks, and Pete flies. But these actions should not be interpreted rigidly, they should be seen instead as projections of the viewer upon figures set within abstract situations. In his forward to the 50th Venice Biennale catalog for the German Pavilion, Julian Heynen writes that Scheibitz's compositions are 'related to the act of seeing in the rest of the world, and yet incomparable; parallel to thought, and yet without a prototype.' Other references are more specific, providing further support for the artist’s model of representation; the 19th century English landscape architect James Hall and his Italian contemporary, Peruzzi, are referenced in works that suggest the timelessness of form, color and nature.

For further information please contact Claire Pauley at 212-414-4144, or Claire@tanyabonakdargallery.com