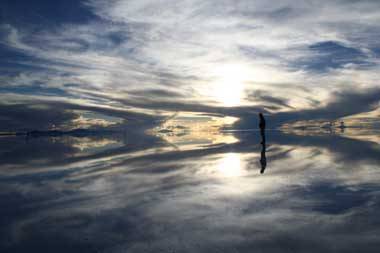 Tanya Bonakdar Gallery is very pleased to present Air-port-city, the gallery’s first exhibition with Tomas Saraceno. Following in the tradition of Buckminster Fuller, Saraceno’s installation, sculpture and photography challenge the conventional restrictions on the human habitat, and suggest new ways of perceiving nature. The possibility of moving cities from the earth’s surface into the air is a central theme in his practice, and his futuristic urban models of floating metropolises are not just fantasy, Saraceno is working towards realizing them as a practical solution to the crowding of the earth’s surface. In depicting these flying communities he points out the narrowness of traditional land-bound perspectives and creates, in Fuller’s words a, 'great and anticipatory vision of the future.'

For Air-port-city Saraceno shows pieces that imagine what it might be like to live in one of his floating utopias. In the two 'Flying Garden' sculptures, balloons floating in netting and laced with air plants hover over the gallery floor, an ecosystem above our heads, demonstrating in Saraceno’s words, 'the sustainable occupation' of the air. In 'Mars on water' drops of water float on a sheet of paper, suggesting the beginnings of life on another planet. 'Ladies and gentlemen we are floating in space,' a still life table piece, in which a magnetic lamp pulls a single screw across the table’s surface and into its force field, is a complex composition of elements and natural forces, a model that suggests some dynamic and utopian alternative universe.

Elsewhere, in an otherwise completely blacked out space, a single channel stills projection further investigates these notions of weightlessness and utopian living. Dissolving dream-like images capture the possibilities of life with an infinite horizon, a life in the clouds free from earthly restraints. These expansive and inspiring vistas are captured on the surface of Salar de Uyuni, Bolivia – the world’s largest and highest salt lake, a location that also served as the centre point to Saraceno’s recent commission for The Curve gallery at The Barbican, London.

For further information please contact Claire Pauley at 212-414-4144 or Claire@tanyabonakdargallery.com.