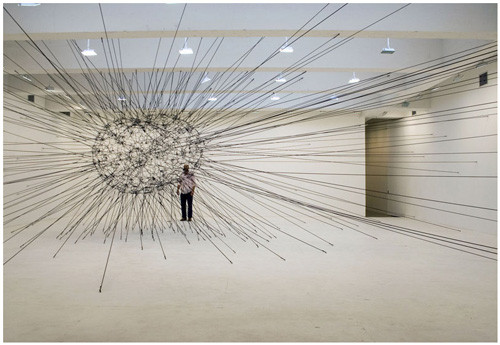 Tanya Bonakdar Gallery is very pleased to present Tomas Saraceno’s Galaxies Forming Along Filaments, Like Droplets Along the Strands of a Spider’s Web, an exhibition comprising a large-scale installation and new sculpture. This is the artist’s second solo exhibition at the gallery.
Tomas Saraceno’s installation, sculpture and photography challenge the conventional restrictions on the human habitat, and suggest new ways of perceiving nature. Futuristic urban models of floating metropolises suggest the possibility of moving cities from the earth’s surface into the air and serve as a central theme in the artist's practice.
Continuing in the tradition of visionary architects before him, including Buckminster Fuller, Gyula Kosice, Archigram and the Ant Farm Collective, Saraceno’s concerns are born of the contemporary anxieties over the depletion of world resources, conservation and immigration. Saraceno is working towards realizing these futuristic urban models as a practical solution to the crowding of the earth’s surface. Fully realizing the philosopher Felix Guattari’s “ecosophy” the artists brings together the three related ecologies of the environmental, mental and social worlds into a methodological practice.
Having applied principles of engineering and physics as well as architecture to further develop his ideas, recent projects have included Museo Aerosolar, a web 2.0 collaborative project where expansively scaled solar balloons are constructed to become spontaneously weightless and take flight. Fabricated using reclaimed plastic shopping bags from around the globe, on which the participants have made drawings, Saraceno sees these sculptures as flying canvases that raise questions as to how national and socio-political boundaries might be overcome.
In this new installation Saraceno takes the spider’s web as a starting point. Investigating how the gossamer thin filaments of these intricate webs are able to suspend life by way of intricate geometry, Saraceno suggests at a conceptual architectural proposal that relies on this most delicate and prehistoric system of life to take us into our future. Of particular interest is the application of this phenomenon throughout the history of time. A keystone to Saraceno’s fascination with these web constructions was the recent discovery that suggests the early universe was a sponge-like form, with galaxies forming along filaments, like droplets on a spider's web.
Elsewhere, the cosmos, macro and micro concerns, and the beginnings of life inform a number of smaller scale sculptures and photographic works. One solar powered ‘planet’ that takes it’s shape from the repeated forms in nature, harnesses the light in the gallery throughout the course of the opening hours and lights the gallery through the night. Conscious that the energy provided from the sun and from the artificial lights of the gallery is the same continuing energy from the birth our galaxy, Saraceno proposes the history of time might be literally grasped and utilized for our own advancement to the skies and beyond.
Born in Argentina, and currently working in Frankfurt, Germany, Saraceno’s recent exhibitions include: Greenwashing - Environment: Perils, Promises and Perplexities, Fondazione Sandretto Re Rebaudengo, Turin, 2008 (group); Tomas Saraceno, Matrix 224, University of California at Berkeley, 2007 (solo); Air-Port-City, De Vleeshal, Netherlands, 2007 (solo); The History of a Decade that Has Not Yet Been Named, Lyon Biennial, 2007 (group); Still Life. Art, Ecology, and the Politics of Change, Sharjah Biennial 8, U.A.E., 2007 (group); The Curve, Barbican Art Gallery, London, 2006 (solo); 27th Bienal de São Paulo, 2006 (group). Forthcoming projects include: Psycho Buildings: Architecture by Artists, the Hayward Gallery, London opening 28th May 2008; Grandeur, 10th Sonsbeek International Sculpture Exhibition 2008, Arnhem, The Netherlands opening June 13th 2008; The Liverpool Biennial 2008, opening 20th September and Artists-in-Residence: Tomás Saraceno, Walker Art Center, September – October, 2008, which will be followed by a solo exhibition in 2009.
For further information please feel free to contact the gallery at info@tanyabonakdargallery.com, or 212-414-4144.
www.tanyabonakdargallery.com