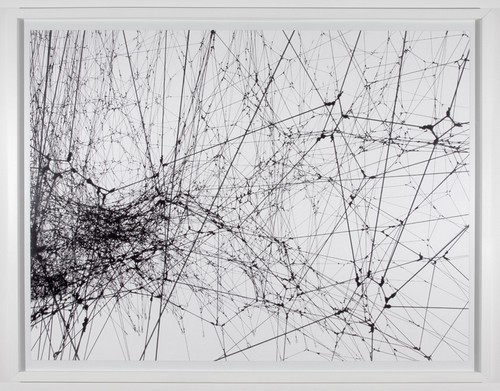 Tanya Bonakdar Gallery is very pleased to present Tomas Saraceno's third major solo exhibition of new work at the gallery, Clouds Cities Connectome. His visionary project promotes the construction of an alternate means of co-habitation, one that literally rises above contemporary debates often politicized by borderlines and national identity. Saraceno defies natural restrictions on what we currently perceive social habitat to be, and proposes a more sustainable and renewable global territory that will rise up in the sky to be borne on the winds. While exploring alternative means of intercultural, international and interdisciplinary space, his architecture of connectivity provokes engagement between individuals while underscoring a mutual interdependence on sustainable natural resources. Examples of the artist's prior and related projects include the renowned Galaxies forming along filaments, like droplets along the strands of a spider's web, featured in the main exhibition pavilion of the 53rd Venice Biennale in 2009, Making Worlds curated by Daniel Birnbaum, as well as, Tomas Saraceno: 14 Billions (working title), at the Bonniers Konsthall, Stockholm, Sweden; which also traveled and recently concluded at the BALTIC Centre for Contemporary Art, Gateshead, UK.

The term "connectome" is applied to a complete mapping of all neuronal connection points within the brain. Inspiration for the exhibition, Clouds Cities Connectome, is gathered from the research of mapping these microscopic neural synapses. It is a process which MIT professor, Dr. Sebastian Seung, describes as one of the greatest technological challenges of all time, as current technology is simply not yet advanced enough to enable a complete mapping of the multitude of neural synopses occurring within the human brain. Research points to hundreds of billions of neurons forming like branches in richly complex configurations of intertwined passageways in a constant state of change, just as one's identity continues to change with time. It is along these pathways that neural activity races, continuously coding our thought, memory, and sensation.

A shifting of perspective from the micro to the macro scale, and one sees these tree-like neural branchings mirrored in the complex and apparently random patterning of a spider's web, a metaphor astronomers refer to when describing the formation of the universe. Like these ever-changing neural networks that branch out in complex arrays and constellations the artist's pneumatic, modular structures create an architecture based on connectivity that would shift and change like the formation of the clouds themselves. The dimensions, size and function of Saraceno's cloud-like structures expand and evolve as determined by the community inhabiting them and the environment. Cloud City is a space of interaction and exchange, a habitat that would actively engage society in a global connectome in the ever-evolving social networks.

Following in a tradition of visionary architects before him; including Buckminster Fuller, fellow Argentinian Gyula Kosice, the Archigram group, and Yona Friedman, whose "Mobile Architecture" of the 1950s proposed dwellings with designs "decided on by the occupant," Saraceno's Cloud City is a vision for a more ecologically sustainable aerial territory created by a new global community. The possibility of populating the air with his vision of fluidly mobile metropolises is not merely fantastic fiction. Saraceno has actively worked towards realizing the goal of practical solutions to overcrowding on the earth's surface. The exhibition features work that serves as a starting point for this dialogue, a conceptual framework emphasizing all points of interconnection.