Took My Hands Off Your Eyes Too Soon 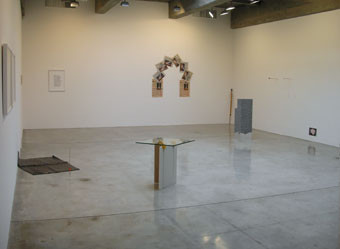 Comprised of sculpture, installation, performance, and works on paper, Took My Hands Off Your Eyes Too Soon deals with issues of trust and surprise between the artist and the viewer, exploring themes of expectation and timing, and the effect of both on the viewer's interaction with the work. Featuring a selection of pieces by Jesse Ash, Justin Beal, Alice Channer, Sean Edwards and Jack Strange, Took My Hands Off Your Eyes Too Soon is curated by Ryan Gander. Ryan explained the initial idea of the show as being “as much about the sound that is made when the works collide, as the specific terrain that five artists (who had not yet met) unwittingly share...”

In the entryway Jesse Ash presents, “Review,” 2007, a fictional review of the exhibition, written before the opening of the show by the critic Michael Wilson. Subverting expectations about the logical progression of an exhibition (creation of work, opening of show, and subsequent review) Ash lightheartedly critiques the idea of the impartial or “official” account. Ash graduated from The Royal College of Art in London with an MA in painting, and is currently working toward a fine art PhD on the subject of rumor at Goldsmith’s College in London. His work was recently featured in The Courier’s Tragedy at The International 3, Manchester, 2007 (group).

Alice Channer’s pieces, the first of which is installed beside Ash’s “Review,” continue into the main gallery, and are made up of a series of seemingly disparate objects and images, which together suggest an aesthetic template for the everyday, be it through fashion, domestic interior, or architecture. For the opening Channer will incorporate a choreographic reference to Bridget Riley’s first visit to New York into the show, which she cryptically describes not as performance, but as “moving an object from one point to another.” Channer holds a BA from Goldmith's College and is currently getting her MA in sculpture at The Royal College of Art. Her recent solo exhibition That Make Up Some Things, was at Associates, London, in July of 2007, and she will be included in a group exhibition at Dicksmith Gallery, London, in the summer of 2008.

Justin Beal’s sculptures and wall works, crafted from plywood, fiberboard, glass and organic materials, make loose references to Modernist architecture, and the Memphis Design Collective, with repeating black and white shapes. This reference to Modernism extends to his table sculpture also—balancing a glass top on a base, with oranges sandwiched between, Beal’s unexpected incorporation of perishable materials highlights the transient ideals on which these designs were based. Beal lives and works in Los Angeles where he received his MFA from the University of Southern California. He has exhibited widely both domestically and abroad, and his recent exhibitions include In Practice, Sculpture Center, New York, 2007 (solo); and Petroliana, the 2007 Moscow Biennial (group).

Like Justin Beal, Sean Edwards investigates the effects of repetition, both literal and conceptual. Beginning with a clear pattern, he copies it again and again, exhausting it through continued use. Edwards' interest in the alchemy of the everyday results in works that are often byproducts, offcuts, or evidence of a processual perpetual practice. Edwards holds an MA in fine art from Slade School of Fine Art in London and his recent exhibitions include an offsite project with Chapter Arts Centre, Cardiff, 2007 (solo); Sean Edwards, S1 Artspace, Sheffield, 2007 (solo); and ...picture books of the pyramids and her postcards of billy the kid..., Associates, London, 2007 (solo).

Repeated images briefly appear in Jack Strange’s “Stunt Double,” 2007, a series of slides projected onto the wall in the side gallery that show pairs of people in jackets that resemble one of the artist’s own. Playfulness and surprise are also thematically relevant in the unexpected relationships that Strange’s works portray. For the opening Strange will activate a sculptural element of the exhibition, donning an armor of marbled plasticine colors, “The Fiend,” 2007, will engage with “The Spinning Beach Ball of Death,” 2007, to demonstrate a true spectatorship of color theory. Recently graduated from Slade School of Fine Art in London, Strange has an upcoming exhibition in Nottingham at Moot Gallery, titled Stupidest Thing Alive.
www.tanyabonakdargallery.com